Zazpiak Bat is a heraldic nickname for the Basque coat of arms which includes the arms of the seven provinces mentioned, stressing their unity. It was designed by the historian Jean de Jaurgain in 1897 for the Congrès et Fêtes de la Tradition basque celebrated at Saint-Jean-de-Luz.

Zazpiak Bat is a motto attributed to Basque explorer Antoine-Thomson d'Abbadie in the late nineteenth century, from the Basque words zazpiak meaning 'the seven' and bat meaning 'one', translates as "the seven [are] one" and refers to the seven Basque Country traditional provinces. However, it was first cited in 1836 by a friend and collaborator of Antoine d'Abbadie's, the Souletin Agosti Xaho (Etudes grammaticales sur la langue euskarienne, dedicated to the Zazpirak Bat). The motto is based on a similar one fashioned by the Enlightenment society Real Sociedad Bascongada de Amigos del País in 1765, Irurac bat, 'the three [are] one', after the provinces currently making up the Basque Autonomous Community), while a like variant was created too in the 19th century known as Laurak bat ('the four [are] one', after the four Basque provinces in Spain), a motto quoted and celebrated by the Provincial Government of Navarre in 1866. 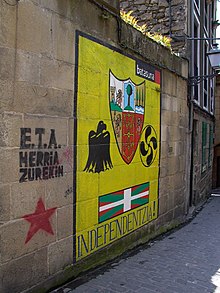 The original Zazpiak Bat features a design of traditional arms of six Basque territories, namely Álava, Gipuzkoa, and Biscay (the three which make the Basque Autonomous Community) plus Navarre (both in Spain); and the two that are part of the French department of the Pyrénées Atlantiques - Soule and Labourd. The coat of arms of the third traditional province, Lower Navarre is subsumed under the coat of arms of the Kingdom of Navarre, therefore omitted and represented by the latter. The modern design is based on the current simplified heraldry of these territories.