Sierra Leone, officially the Republic of Sierra Leone, is a Constitutional Republic in West Africa.[3] Since it was founded in 1787, the women in Sierra Leone have been a major influence in the political and economic development of the nation.

Sierra Leonean women face extreme gender inequality.[4] They experience high levels of poverty, violence, and exclusion.[4] Nevertheless, they have also played an important role in the education system, founding schools and colleges, with some such as Hannah Benka-Coker being honoured with the erection of a statue for her contributions[5] and Lati Hyde-Forster, first woman to graduate from Fourah Bay College being honored with a doctor of civil laws degree by the University of Sierra Leone.[6] 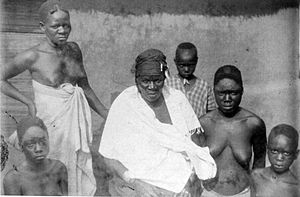 With the establishment of the Province of Freedom in 1787, a Sherbro known as was a signatory to the treaty of 1787 which ceded the land to the British.[7]

In the 1792 elections, all heads of household could vote and one-third were ethnic African women.[8]

The majority of repatriated women were Yoruba.[9] The Yoruba were different from traditional African ethnic groups in that men tended the fields which allowed the women to trade.[9] This independence gave women the freedom to travel.[9] As they were financially independent, they were able to divorce to improve their lives economically.[9]

From 1830, the women in Sierra Leone were well known for their trading of non-slave-related items.[10] A notable woman trader of the period was who had married a butcher, Thomas, and sold meat to the army.[11]

The Krio female traders were predominantly Christian.[12] They traded along the entirety of the West Coast expanding both their trade and spreading the Christian religion.[12] However, by 1900 European companies began to dominate trade and the Krio moved to other professions such as medicine and teaching.[12]

In 1878, Madam Yoko became the Queen of Kpaa Mende Seneghum, which had become one of the largest political alliances within the interior. She also went to war against smaller tribes to increase her holdings.[13] In 1898 she supported the British during a rebellion, which also allowed her to expand her holdings. At the time of her death in 1906, her confederacy had become so large it had to be divided into 15 chiefdoms.[14] 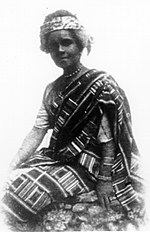 In the city of Freetown, before World War One a woman's position was decided on either class or ethnicity. The Krio people were the dominant ethnic group, with some having access to a better education, the wealthier families had their daughters sent to British finishing schools. The majority of Krio women however fell into the lower classes and their education usually did not go beyond elementary school level.[16]:439

In 1915, Adelaide Casely-Hayford played an important part regarding women's rights in Freetown giving a lecture on "The rights of Women and Christian Marriage". In 1923 she founded the "Girls Industrial and Technical Training School" with the aim to make women self-sufficient economically.[16]:440 In 1930 women were given the right to vote, according to local lawyer J. C. Zizer this could be attributed to the numbers of women who now worked in the civil service where their employment terms were equal to their male counterparts.[16]:442

In 1938, Constance Cummings-John was the first woman in Africa to be elected to a municipal council and she was the first woman to be elected Mayor of Freetown. Her actions led to the formation of the Sierra Leone Market Women's Union and the Washerwoman's Union.[17] In 1952 she founded the Sierra Leone women's movement as well as a newspaper.[18] She founded the Eleanor Roosevelt Preparatory School for Girls and funded it from the proceeds of her quarrying business.[19]

In 1943, Frances Wright was called to the bar, becoming the first female lawyer in Sierra Leone, she was also given an appointment by the government as a magistrate.[20] She was a legal adviser to the British High Commission in Freetown and was considered a champion of women's rights.[21]

In 1957, four women ran for parliament: , Constance Cummings-John, Ellen G.A. Caulker and Mrs. C.T. Williams. Cummings-John and Richards both won their bids but their party filed electoral petitions against them, preventing them from taking their seats.[22]

In the 1973 general election and stood for election as independent candidates.[22] By now Sierra Leone had become a one-party state and their campaigns were unsuccessful.[22]

1978 saw as the sole woman to stand for parliament in the general election.[22]

In 1989, UNICEF reported that on average a woman in Sierra Leone worked up to 16 hours a day and that the majority were surviving on just one meal per day. There was a maternal mortality rate of 70% primarily from infections and malnutrition.[24] 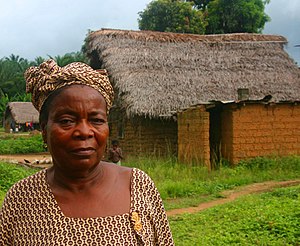 A woman in a Sierra Leone village.

During the civil war(1991–2002), it is estimated that 33% of human rights violations were perpetrated against women.

A report by the Truth and Reconciliation Commission stated that thousands of women and girls were abducted from their homes and suffered physical-, sexual- and psychological abuse, including rape and forced pregnancy.[25] Many of them were subject to servitude, slavery and forced cannibalism while others were drugged, tortured and murdered.[25]

A number of women and girls became soldiers with the Revelutionary United Front (RUF) during the Civil War.[26]

During the war, a group women organized founded the Sierra Leone Women's Movement for Peace, and using peaceful protests attempted to mediate peace between the warring factions.[27][28]

On June 14, 2007, the Parliament of Sierra Leone passed three laws which made wife-beating illegal, allowing women to inherit property and to protect women from forced marriage.[29] However, in 2014, 63% of women aged 15–49 still held the belief that male partners were justified in hitting and beating their female partners under certain circumstances.[30]

The 2007 Domestic Violence Act is rarely enforced as survivors are required to submit a medical report to the police. The majority of women in Sierra Leone cannot afford to pay the medical examination fee nor can they afford the cost of a lawyer to represent them.[31] Many women in the rural areas of Sierra Leone still are not aware that domestic violence is a crime or of their rights.[31]

The adoption of Registration of Customary Marriages and Divorce Act made 18 the legal age for marriage.[29] Prior to this, there was no minimum age for marriage nor was consent from both parties a prerequisite.[32] In rural Sierra Leone, it was not uncommon for girls under the age of 13 to be given in marriage to elderly men.[32] The law aims to protect women and girls from forced marriage as well as physical, sexual and financial abuse.[32]

Women in Sierra Leone have extremely limited reproductive rights.[33] Until 2007, women and girls could still be given in marriage by their families without their consent.[32]

Sierra Leone has one of the world's highest maternal and infant mortality rates.[32][34]

In 2013, Sierra Leone had the 7th highest teen pregnancy rate in the world.[33] 38% of Sierra Leonean women aged 20–24 had given birth to their first baby before the age of 18.[34][30] Teenage pregnancy is a major contributing factor to Sierra Leone's high maternal mortality rate as teenage mothers have a 40%-60% risk of dying in childbed.[34] Babies born to teenage mothers have a 50% higher risk of being stillborn or dying shortly after birth than babies born to mothers over the age of 20.[34]

The names are placed in chronological order: