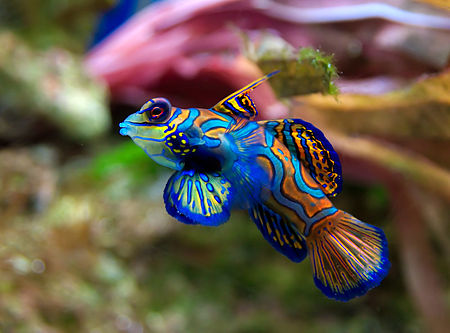 It is the parent project of:

It is worth keeping one eye on several Wikiprojects that overlap with this one, including:

The Fish Portal is the associated portal of WikiProject Fishes.

For recruiting additional members, see users associating themselves with fish.

Structure and criteria for inclusion

Articles should normally be about particular taxa. For example:

When a genus contains only a small number of similar species, the articles may be combined with the article on the genus (e.g., Crappie, which includes the white crappie, Pomoxis annularis, and the black crappie, P. nigromaculatus.)

Common names should be written in sentence case rather than title case, following normal English usage and that of FishBase. Use, for example, "largemouth bass", not "Largemouth Bass". Place names or personal names that form part of a common name remain capitalized, hence "Guadalupe bass" (in reference to the Guadalupe River) or "White Cloud Mountain minnow" (in reference to White Cloud Mountain in China).

Article naming for fishes differs, as detailed below, from Naming conventions (fauna).

Use the common name for any species that satisfies at least one of the following criteria:

Use the Latin name for any species that fails to satisfy criteria 1(i) to 1(iv), including such situations as the following:

The guppy (Poecilia reticulata), also known as the millionsfish, is a small fresh and brackish water fish from Central America.

Lists of fish species should follow the form: List of fishes of <Region>. The definite article may be needed for the name of some regions. Note that "List of fish of ..." is incorrect when dealing with a list of the species.

Articles on taxa above the generic level should be titled with the Latin form of the name and not the anglicization, e.g. Cyprinidae not cyprinid, and Perciformes not perciform. The anglicizations may be freely used in article text however.

Wikipedia categories should be created for well-known families, using the plural of the common name of the family ( or ), and for orders, using the common name (e.g., ) or the scientific epithet (e.g., Category:Cyprinodontiformes). For very small families (e.g., the pygmy sunfishes), only the order category may be used, but usage must be consistent among members of a family.

All articles on taxa should have taxoboxes (constructed using the taxobox template, not built from scratch) including kingdom, phylum, class, order, family, genus, and species. The new taxa above class should not be indicated, since they can be found elsewhere in Wikipedia. Taxa between class and order should not be used, since they are unstable and can be found in the class and order articles. For large taxa, intermediate classifications may be indicated in the taxobox. For example, Perciformes should indicate their suborder and (if one exists) superfamily, and members of large families should indicate subfamilies. All members of a taxon should, however, be consistent in the usage of intermediate classifications.

See Wikipedia:WikiProject Tree of Life/taxobox usage for the full details of taxobox construction.

An example taxobox, for the warmouth (Lepomis gulosus), is given at right. Note that the specific name is L. gulosus, not simply gulosus, and that the generic name is not bolded, since the article is not about the entire genus Lepomis.

An image should be included in the taxobox if an appropriate one is available.

The taxobox image should ideally picture a single fish, facing left, in a horizontal orientation, cropped to 20 percent of the fish's length around the fish's body, and should be 250 pixels wide. (The image should not be resized manually; the full-size image should be uploaded and markup used to create the 250px image. Note that very large images may be resized before upload so that they will fit in a normal browser window when enlarged.) For articles long enough to warrant inclusion of additional images, these may be placed as thumbnails in the article body, ideally showing the fish in its native environment.

Note that images of fishes which do not possess right-left symmetry should not be flipped to obtain a left-facing fish; doing so would, for example, convert a righteye flounder into a lefteye flounder.

Text captions should not be used on taxobox images in species articles, but in articles on higher taxa, the article caption should indicate the species pictured (if known), in the format "[[Common name]] (''Genus species'')". If the species depicted is not known, the caption should identify the fish as closely as possible, as in "Pygmy sunfish (Elassoma sp.)"

A example size comparison of a whale shark and a human

It is always beneficial to have a picture that communicates a sense of scale. This can be achieved by

Anyway, any image is better than no image - esp. if you have only third party material available, or if you don't want to get the animal out of its living environment.

The first paragraph should give the common and systematic names of the taxon featured in the article, as well as some information about its classification. Species articles should follow the form:

The foofish (Barus foous) is a species of freshwater fish in the baz family (family ) of order . It is native to the Big River basin in Ruritania.

Barus is a genus of freshwater fish in the baz family (family ) of order . The type species is the (B. vulgaris), and fishes of this genus are known as the barfishes.

Information on keeping fish in an aquarium should be put in a section entitled "In the aquarium". Breeding and dietary information pertaining to captive fish should go here, rather than in the main section, which should refer primarily to the fish in its natural habitat.

Other sections may address topics of interest warranting discussion longer than a brief paragraph.

Templates exist for citing FishBase and ITIS, and these should be used.

For a FishBase entry on an order, use:

For a FishBase entry on a family, use:

For a FishBase entry on a genus, use:

For most FishBase entries on species, use:

For most FishBase entries on subspecies, use:

For FishBase entries that are problematic for the above templates, get the numeric ID from their URL and use:

For an ITIS entry, use:

For the ITIS template, year and date refer to the date on which ITIS was consulted. Date can be in either U.S. or international format, as it will be wikified.

Web sites or pages not used as sources for the article (except for FishBase and ITIS) should appear in a section entitled "External links" (using the plural even if only one link is present).

Please make sure to add articles to the appropriate categories among the ones listed on Wikipedia:WikiProject Fishes/Categories. If there are any categories that you think should be created, please request them in the tasklist on this page or on the talk page.

In some cases, there might be more appropriate ways to group articles than categories, such as lists or article series boxes. For more information, see Wikipedia:Categories, lists, and series boxes.


Userbox enthusiasts may want to add one of these userboxes to their userpage to show that they are members of this WikiProject, by adding {{User WPFishes}} or {{User WPFishes2}}. For more userboxes, see additional fish related userboxes.

Articles to be merged

Articles to be split

I originally nominated the article for deletion as original research. There seems to be some confusion with this article about whether it represents a distinct species and whether it's actually been scientifically described. It's been improved, but it'd be great if an expert would comment on the AfD, improve the article, or otherwise help us figure this one out. Graymornings(talk) 11:30, 19 January 2009 (UTC)

Any fish article requiring a review may be placed here for review specifically by members of the wikiproject.

Did you know? articles