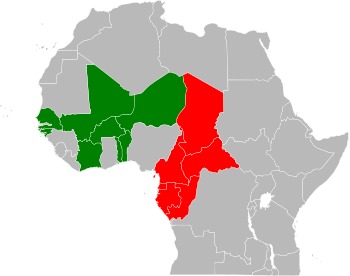 The West African CFA franc (French: franc CFA; Portuguese: franco CFA or simply franc, ISO 4217 code: XOF) is the currency of eight independent states in West Africa: Benin, Burkina Faso, Guinea-Bissau, Ivory Coast, Mali, Niger, Senegal and Togo. These eight countries had a combined population of 105.7 million people in 2014,[1] and a combined GDP of US$128.6 billion (as of 2018).[2]

In 2019, it was announced that the West African CFA franc would be reformed, which will include renaming it the Eco and reducing France's role in the currency.[4][5]

For coins struck prior to the CFA franc, see French West African franc

In 1948, aluminium 1 and 2 franc coins were introduced. These were followed in 1956 by aluminium-bronze 5, 10, and 25 francs. All carried the name "Afrique Occidentale Française". In 1957, 10 and 25 franc coins were issued with the name of "Togo" were minted for use in that country, these were issued only for that year. From 1959, all coins have been issued by the BCEAO.

From 1959 onward, the overall size and composition of the coins changed little, however "République français" and the stylized Marianne bust was dropped from all coins, replaced with the title "Banque Centrale des États de l'Afrique de l'Ouest" with the design on the 1, 5, 10, and 25 francs featuring a gazelle's profile, carried over from colonial issues, and a tribal mask between the denomination, which has become the emblem of the West African monetary union. Nickel-Steel 100 franc coins were introduced in 1967, followed by the cupro-nickel 50 franc coins in 1972. These also featured the familiar tribal mask. Small, stainless steel 1 franc coins were introduced in 1976, replacing the larger aluminum 1 franc coins, and were struck until 1995. The 10 and 25 franc coins saw a redesign in 1980, depicting a family using a water pump and a young woman with chemistry tools, respectively. A bimetallic 250 francs was introduced in 1992 to reduce excess change. These coins, however, proved to be unpopular in many regions and were discontinued after 1996. They are however, still legal tender. In 2003, bimetallic 200 and 500 franc coins were introduced, replacing smaller denomination notes. Like all the other West CFA franc coins, these depicted the mask emblem.

Unlike some coins of the Central African CFA franc, no modern circulation coins have been issued depicting the names of individual member states, nor any letters or marks of indication.

In 1959, the BCEAO took over the issuance of paper money and reintroduced a 5,000-franc note. With the exception of a few early issues, the notes of the BCEAO carry a letter to indicate the country of issuance. The codes are as follows:

The country codes are used to identify and categorise flow of cash between the CFA franc countries, as well as repatriating banknotes to their country of origin.[8]

In 2004, a new series of notes was introduced in denominations of 1,000, 2,000, 5,000 and 10,000 francs, with the 500-franc note having been replaced by a coin the year before. The newer notes contain updated security features and are more modern in design. The change was welcomed because of a perception that the old notes were dirty and disease-ridden.[9] The colour of the 5,000-franc note was changed from blue to green. On November 30, 2012, the Banque Centrale des États de l'Afrique de l'Ouest (Central Bank of the West African States) issued a 500-franc banknote.[10][11]

There has been some debate over whether the West African CFA franc serves as way for France to keep influence in region, often to the detriment to these nations. For example one of the "rules" of the currency is that the central banks of all of the nations involved have to keep at least 50% of their foreign assets in the French Treasury. Some see this as a way to keep the currency stable while other see it as limiting the economic independence of the West African nations that are involved. Some studies have shown that the CFA franc has reduced intra-regional trade, made countries dependent on exporting a limited number of goods, narrowed the industrial base, and made the economies of these nations very vulnerable to external shocks. Even though during the early 1950s to the mid 1980s, CFA countries experienced higher real GDP growth and lower inflation rates than other non-CFA Sub-Saharan countries, the economic shocks of the 1986 and 1993 caused the CFA franc to become increasingly overvalued and run increased deficits in the French Treasury. Some policymakers have argued that the CFA franc be tied to a basket of currencies rather than one currency as it currently is. Also, they state that it the reserve requirement should be restructured in order to give CFA countries more economic freedom.[12]