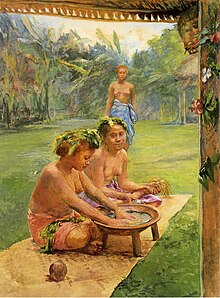 Wallis and Futuna, an overseas territory of France in Oceania has a rich Polynesian culture that is very similar to the cultures of its neighbouring nations Samoa and Tonga. The Wallisian and Futunan cultures share very similar components in language, dance, cuisine and modes of celebration.

Fishing and agriculture are the traditional practices and most people live in traditional fate houses in an oval shape made of thatch.[1] Kava, as with many Polynesian islands, is a popular beverage brewed in the two islands, and is a traditional offering in rituals.[1] Highly detailed tapa cloth art is a specialty of Wallis and Futuna.[2]

The native languages spoken daily by the islanders are Wallisian (also called ʻUvea) and Futunan, two closely related languages which trace their roots to Samoic origin. Despite this, the official language (because of its administrative purposes), the de jure language is French (with the population of each island preferring to talk in their own native tongue).[3] Oral traditions include the Tongan presence on Uvea and the Chant of Lausikula.[4]

Most of the people are Roman Catholic;[5] the law of Wallis and Futuna is partially based on Catholic morals.[6] The Patron Saint of the Islands, Pierre Chanel was the first missionary who came to the island in 1837.[1]

Painting on a tapa sheet

Tapas is a popular art form which is made from the "base" of the bark of the mulberry and breadfruit trees. The pounded bark is painted with vegetable colours and with attractive designs. It provides employment to about 300 people in almost every village, and from which many families have been economically benefited in the two islands. This art form is in great demand in the Pacific, in the Noumea and Tahiti. Another art form is making of mats and necklaces with straw and shells. Efforts to further promote this vocation to export goods beyond the islands to Europe and France has faced problems of high transportation costs.[1]

Roasted pigs of Wallis and Futuna on St. Chanel Day

Dancers from Wallis and Futuna performing the 'Plantation'

Numerous festivals are celebrated in Wallis and Futuna throughout the year; on St Chanel Day, pigs are roasted and placed in the sun, and dancing performances are held. The is put on in Noumea annually.[8] Flae fones are community feasting and meeting structures.[9]

Known for their sword dance, the people of Wallis and Futuna are stated to be "excellent dancers".[10] There are at least 16 types of dances (faive), their differences based upon location, occasion, number of dancers, gender, accompanying instruments, and other modifiers. Most dances are accompanied by singing and some type of percussion instruments as dancing without drumming is considered unusual. The kailao (paddle-club dance), however, has no song and only includes percussion.[11] Wallis and Futuna dancers perform across the Oceania region at festivals.[12]

Kava is the indigenous Polynesian beverage which is customarily served in all religious rituals. Kava is brewed in a wooden vessel known as a tana, a multilegged bowl which is also an art form carved in wood, that is much in demand.[1] Australian beer is also popular. Diet includes chicken, coconuts, figs, mangoes, pandanus, pork, and wild cherry.

There is not much tourism in the two islands. The natural heritage of the territory is largely preserved; there are not many recreational sites in Wallis and Futuna. Some of the cultural heritages that attract tourists are the grave of Saint Pierre Chanel who was canonized in 1954 and other natural attractions of lakes, lagoons and beaches, and sports activities such as golfing (6 hole course in Wallis), diving and flying.[1]

Traditional monarchies and their role