Position of Gibraltar within the European Union 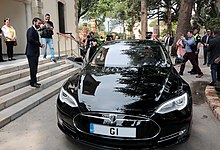 Number plates in Gibraltar have the same measurements as those in the UK:[1]

From 1912 to 2001 Gibraltar number plates consisted of the letter 'G' (for Gibraltar) followed by a series of digits issued in numerical order.[2] The maximum number of digits was five, so the first registration plate should have been G 1 - in fact the first plate was GBZ 1 - and the last was G 99999.

A new system was introduced in October 2001, in anticipation of running out of registration numbers once reaching G 99999. The new system consists of the letter 'G' followed by four digits from 1000 to 9999 and another letter. The last letter represents the series. For example, series A consists of all registration plates from G 1000 A to G 9999 A. The next series is B, and so on. Currently, as of May 2020 registration plates in Gibraltar are in series F.

The European flag is also now featured, along with Gibraltar's international vehicle registration GBZ.[3] The two registration formats resemble those used in Spain between 1900 and 1971, and 1971 and 2000. However the single letter G was never issued as a provincial designator on Spanish plates.

Temporary/export plates are similar to, and in the same series as, the regular issues. However at the right hand side of the plate is a green band, showing month and year of expiry. Until 2001 temporary tourist (duty-free) plates had registrations from the normal series except that the prefix used was GG. This series reached past GG90000, and was probably superseded by the dated green band style when the suffix letter was introduced.

Dealer plates are light blue with the letters DLR and a serial number in white. These are usually magnetic plates, but also can be simply written on paper or cardboard etc.

The Chief Minister's official car has the registration number G1.[4]

The Governor's official car, following tradition, displays a silver Crown, in place of a registration plate with a number.[5]