cheese-like substance made without animal products

Vegan cheese made from cashews and almonds 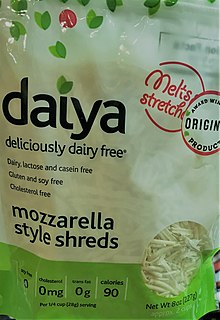 Vegan cheese is a category of non-dairy, plant-based cheese analogues. Vegan cheeses range from soft fresh cheeses to aged and cultured hard grateable cheeses like plant-based Parmesan. The defining characteristic of vegan cheese is the exclusion of all animal products.[1]

Non-dairy cheese originated from China in the 16th century, made with fermented tofu or whole soy.[5]

Later homemade vegan cheeses were made from soy flour, margarine, and yeast extract. With harder margarine, this can produce a hard vegan cheese that can be sliced; softer margarine produces a softer, spreadable cheese.[6]

The product became commercially available around the 1970s or 1980s.[7] These initial products were lower in quality than dairy cheese or today's vegan cheese, with a waxy, chalky or plastic-like texture.[7]

In the early 1990s, the only brand of vegan cheese available in the United States was Soymage.[8] Since then, the number and types (i.e. mozzarella, cheddar, etc.) of widely available vegan cheeses have diversified.[7][8] Also, soy-free options have since been explored. In the 1990s, vegan cheese sometimes cost twice as much as dairy cheese.[6]

As of 2018, the market for vegan cheese grew on a global scale. According to market research, Europe had the greatest market share of 43%, followed by North America, Asia-Pacific, South America and Middle East & Africa.[9] The global vegan cheese market is expected to attain a market value of $3.9bn by the end of 2024, up from $2.1bn in 2016.[10]

According to the Plant Based Food Association, the US market for plant-based foods is anticipated to reach $4 billion in sales by 2024.[11] The expansion is driven by the increased inclination towards vegetarian sources, rising urban populations, and greater preference towards international foods.[12][13] Multiple grocery chains expanded their geographical presence within specialty stores and supermarkets to address the anticipated growth for vegan cheeses, with annual sales growth expected at 8%.[9]

The more common types of vegan cheese being manufactured, distributed, and produced through this market are Mozzarella, Parmesan, Cheddar, Gouda, and Cream Cheese non-dairy based cheeses. These vegan cheeses are consumed in restaurants, grocery stores, bakeries, vegan school meals, and in homes. Vegan cheeses are expected to grow and diversify into the mid-2020s.[14][15]

Labeling of vegan cheese, like other vegan dairy analogues, is controversial, with dairy industry groups pushing to prohibit the use of terms like "cheese" on non-dairy products.[17]

In February 2019, a Vancouver, British Columbia vegan cheese shop was ordered by the Canadian Food Inspection Agency (CFIA) to stop calling their products cheese as it was 'misleading' to consumers, despite the store stating that their cheese was always labeled as "dairy-free" and "plant-based."[18] The CFIA later reversed the rejection and stated there was no objection for using the nomenclature “100% dairy-free plant-based cheese” provided that "it is truthful".[19]

In 2019, a Brixton UK vegan cheese shop was asked by Dairy UK to stop describing products as cheese because it 'misleads shoppers', although the store owners stated their "products were clearly marked as dairy-free."[20]

In 2020, vegan cheese company Miyoko's Creamery filed a lawsuit against the California Department of Food and Agriculture after the department ordered the company to stop using dairy words on its packaging.[21] In 2018, the company was sued in New York in a lawsuit that alleged customers were misled by the label "vegan butter."[22] Company founder Miyoko Schinner is a leading advocate for the free speech rights of vegan foods.[23][24]

Common vegan cheese sources include soy, almond and rice milk, in addition to other milk alternatives.[9] Food scientists use a "blend of gums, protein, solids and fats" to create the mouthfeel and melt of dairy cheese.[25] One vegan cheese product aims to solve this difficulty by making cheese with casein produced by yeast rather than by cows.[26]

In August 2019, Botany International Foods recalled Naturli' and Funky Fields' Organic Spreads after undeclared allergens were found in the contents. The Australian Food Standards Authority reported traces of milk in the form of whey protein.[27]

Vegan cheeses made with nutritional yeast, including some alternatives to Parmesan cheese, may provide Vitamin B12, while other vegan cheeses don't.[16]

Plant-based proteins or vegetable proteins are derived from edible sources of protein, such as soybeans and their milk.[29] The manufacturing process of fermentation is often in use to replicate dairy cheese texture and flavor, as well.[30]