Participation of the United States in regime change in Latin America involved US-backed coups d'état aimed at replacing left-wing leaders with right-wing leaders, military juntas, or other authoritarian regimes.[1] Lesser intervention of economic and military variety was prevalent during the Cold War in line with the Truman Doctrine of containment, but regime change involvement would increase after the drafting of NSC 68 which advocated for more aggressive combating of potential Soviet allies.[2]

Several instances of intervention and regime change occurred during the early-20th-century "Banana Republic" era of Latin American history to promote American business interests in the region.[1] United States influenced regime change in this period of Latin American history started after the signing of the Treaty of Paris in the wake of the Spanish-American War. Cuba gained its independence, while Puerto Rico and the Philippines were occupied by the United States.[3] Expansive and imperialist U.S. foreign policy combined with new economic prospects led to increased U.S. intervention in Latin America from 1898 to the early 1930s.[4]

In Argentina, military forces overthrew the democratically elected President Isabel Perón in the 1976 Argentine coup d'état, starting the military dictatorship of General Jorge Rafael Videla, known as the National Reorganization Process. Both the coup and the following authoritarian regime was eagerly endorsed and supported by the United States government[5] with US Secretary of State Henry Kissinger paying several official visits to Argentina during the dictatorship.[6][7][8]

The US government supported the 1971 coup led by General Hugo Banzer that toppled President Juan José Torres of Bolivia.[9][10] Torres had displeased Washington by convening an "Asamblea del Pueblo" (Assembly of the People), in which representatives of specific proletarian sectors of society were represented (miners, unionized teachers, students, peasants), and more generally by leading the country in what was perceived as a left wing direction. Banzer hatched a bloody military uprising starting on August 18, 1971, that succeeded in taking the reins of power by August 22, 1971. After Banzer took power, the US provided extensive military and other aid to the Banzer dictatorship.[11][12] Torres, who had fled Bolivia, was kidnapped and assassinated in 1976 as part of Operation Condor, the US-supported campaign of political repression and state terrorism by South American right-wing dictators.[13][14][15]

Brazil experienced several decades of authoritarian governments, especially after the US-backed[16] 1964 Brazilian coup d'état against social democrat João Goulart. Under then-President John F. Kennedy, the US sought to "prevent Brazil from becoming another China or Cuba", a policy which was carried forward under Lyndon B. Johnson and which led to US military support for the coup in April 1964.[17][18]

After the democratic election of President Salvador Allende in 1970, an economic war ordered by President Richard Nixon,[19] among other things, caused the 1973 Chilean coup d'état with the involvement of the CIA[20] due to Allende's democratic socialist leanings. What followed was the decades-long US-backed military dictatorship of Augusto Pinochet.[21] In 1988 a presidential referendum was held in order to confirm Pinochet's ruling for 8 more years. The oppositional Concertation of Parties for Democracy endorsed the "No" option, winning the referendum and ending Pinochet's rule democratically. After that free elections were held in 1989 with Concertation winning again.[22][23][24]

A declassified report from the U.S. government "Annex-NSSM 97" details an early plan to overthrow President Allende if he were to take office.[25] The document explicitly states that the U.S. government's role should not be revealed and would primarily use Chilean institutions as a means of ousting the President. The Chilean military is highlighted as the best means to achieve this goal. The benefits of a coup initiated by the military are to reduce the threat of Marxism in Latin America and to disarm a potential threat to the United States.[26]

Costa Rica was the only country in Latin America that never had a long lasting authoritarian government in the 20th century. Its only dictatorship during the period was after the 1917 Costa Rican coup d'état led by Minister of War Federico Tinoco Granados[27] against President Alfredo González Flores after González attempted to increase tax on the wealthy, and it lasted only two years. The US government led by Democratic President Woodrow Wilson did not recognize Tinoco's rule and helped the opposition that quickly overthrew Tinoco after a few months of warfare.[27]

Years later Christian socialist medic Rafael Ángel Calderón Guardia of the National Republican Party would reach power through democratic means, promoting a general social reform and allied to the Costa Rican Communist Party.[28] Tensions between government and the opposition, supported by the CIA, caused the short-lived Costa Rican Civil War of 1948 that ended Calderón's government and led to the short de facto rule of 18 months by José Figueres Ferrer.[28] However, Figueres also held some left-leaning ideas and continued the process of social reform.[27] After the war, democracy was quickly restored and a two-party system encompassed by the parties of the Calderonistas and Figueristas developed in the country for nearly 60 years.[27]

During the late 1800s, the U.S. sought to expand its economic interests by developing an economy overseas.[29] This sentiment would help expand the support for the Spanish-American War and Cuban liberation despite the U.S. previously establishing itself as anti-independence and revolution.[29] Nonetheless, the war with Spain would allow Cuba to gain its independence from the Spanish crown, though it would be replaced with American influence on political structure with such developments as the Platt Amendment.[30] Support for the Cuban dictator, Fulgencio Batista, would also come from the U.S., as his economic beliefs benefitted American business interests, although this would lessen with the Cuban revolution.[31]

The United States would allegedly try to assassinate Fidel Castro over 600 times, although no attempts were successful.[32] 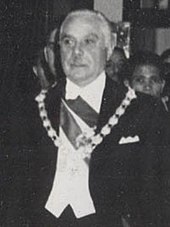 In May 1961, the ruler of the Dominican Republic, right-wing dictator Rafael Trujillo, was murdered with weapons supplied by the United States Central Intelligence Agency (CIA).[33][34] An internal CIA memorandum states that a 1973 Office of Inspector General investigation into the murder disclosed "quite extensive Agency involvement with the plotters." The CIA described its role in "changing" the government of the Dominican Republic as a 'success' in that it assisted in moving the Dominican Republic from a totalitarian dictatorship to a Western-style democracy."[35][36] Socialist Juan Bosch, whose propaganda and institute for political training had received some CIA funding via the J.M. Kaplan Fund, was elected president of the Dominican Republic in its first free elections, in December 1962. Bosch was deposed by a right-wing coup in September 1963. American President Lyndon Johnson intervened into the 1965 Dominican Civil War by sending American troops to help end the war and prevent supporters of the deposed Bosch from taking over. On July 1, 1966, elections were held with Joaquín Balaguer winning against Bosch.[37]

Peasants and workers (mostly of indigenous descent) revolt during the first half of the 20th century due to harsh living conditions and the abuse from landlords and the government-supported American United Fruit Company. This revolt was repressed, but led to the democratic election of Jacobo Arbenz. Arbenz was overthrown during the 1954 Guatemalan coup d'état, endorsed by the United States.[38] 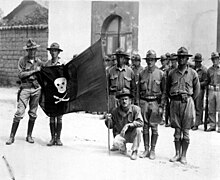 In 1912, during the Banana Wars period, the U.S. occupied Nicaragua as a means of protecting American business interests and protecting the rights that Nicaragua granted to the United States to construct a canal there.[39] The intervention, utilizing the U.S. Marine Corps, was sparked by a rebellion that opposed the United States. After quelling the rebellion, the U.S. continued occupying Nicaragua until 1933, when President Herbert Hoover officially ended the occupation.[40]

In 1903, the US aided the secession of Panama from the Republic of Colombia. The secession was engineered by a Panamanian faction backed by the Panama Canal Company, a French–US corporation whose aim was the construction of a waterway across the Isthmus of Panama thus connecting the Atlantic and Pacific Oceans. In 1903, the US signed the Hay-Herrán Treaty with Colombia, granting the United States use of the Isthmus of Panama in exchange for financial compensation amidst the Thousand Days' War.[42][43]

Increasing tensions between Manuel Noriega's dictatorship and the US government also led to the United States invasion of Panama, which ended in Noriega's overthrowing.[citation needed]

The United States supported dictatorship of Alfredo Stroessner from 1954 to 1989,[44][45][46][47] although it would later support a coup in 1989 by the "traditionalist faction" of the Colorado Party against Stroesser.[citation needed]

On 23 January 2019, the President of the National Assembly of Venezuela, Juan Guaidó, was declared the acting President of the country, disputing Nicolás Maduro's presidency and sparking a presidential crisis. Shortly after Guaidó's announcement, along with allies and several other nations, the United States recognized Guaidó as the legitimate president of Venezuela.[48] US Vice President Mike Pence stated in April that the US was set on Maduro's removal, whether through diplomatic or other means, and that "all options" were on the table.[49] Secretary of State Mike Pompeo said that the US would take military action "if required".[50] In December 2019, Pompeo stated that the United States did not plan a military intervention in Venezuela, saying that "we have said that all options are on the table", but that "we have learned from history that the risks from using military force are significant".[51] Michael Shifter, president of the Inter-American Dialogue think tank, stated that "military action of the United States against Venezuela would be contrary to the movements of the Trump administration to retire troops from Syria or Afghanistan."[52]

A memo obtained by Agence France-Presse described that the US Agency for International Development would divert $41.9 million to promote Guaidó, including $19.4 million for salaries and stipends for Guaidó's staff, covering their travel, and "other costs necessary to ensure full deployment of a transparent financial management system and other activities necessary for a democratic transition," as well as $2 million to support the opposition in negotiations with the Maduro administration.[53] In August 2019, President Donald Trump's administration imposed new additional sanctions on Venezuela as part of their efforts to remove Maduro from office, ordering a freeze on all Venezuelan government assets in the United States and barring transactions with US citizens and companies.[54][55]