Transglutaminases are enzymes that in nature primarily catalyze the formation of an isopeptide bond between γ-carboxamide groups ( -(C=O)NH2 ) of glutamine residue side chains and the ε-amino groups ( -NH3 ) of lysine residue side chains with subsequent release of ammonia ( NH3 ). Lysine and glutamine residues must be bound to a peptide or a protein so that this cross-linking (between separate molecules) or intramolecular (within the same molecule) reaction can happen.[1] Bonds formed by transglutaminase exhibit high resistance to proteolytic degradation (proteolysis).[2] The reaction is[1]

The upper reaction shows how a transaminase combines with a glutamine residue, releasing ammonia, and then the combination reacts with the amine group of a lysine residue of another protein, setting the enzyme free again.

Eight transglutaminases have been characterised in humans. These TGases have a three or four-domain organization, with immunoglobulin-like domains surrounding the central catalytic domain. The core domain belongs to the Papain (CA clan) superfamily and uses a Cys-His-Asp catalytic triad.[2]

Transglutaminases form extensively cross-linked, generally insoluble protein polymers. These biological polymers are indispensable for an organism to create barriers and stable structures. Examples are blood clots (coagulation factor XIII), as well as skin and hair. The catalytic reaction is generally viewed as being irreversible, and must be closely monitored through extensive control mechanisms.[2]

A collection of the transglutaminase substrate proteins and interaction partners is accessible in the TRANSDAB database.

Deficiency of factor XIII (a rare genetic condition) predisposes to hemorrhage; concentrated enzyme can be used to correct the abnormality and reduce bleeding risk.[2]

Anti-transglutaminase antibodies are found in celiac disease and may play a role in the small bowel damage in response to dietary gliadin that characterises this condition.[2] In the related condition dermatitis herpetiformis, in which small bowel changes are often found and which responds to dietary exclusion of gliadin-containing wheat products, epidermal transglutaminase is the predominant autoantigen.[7]

Mutations in keratinocyte transglutaminase are implicated in lamellar ichthyosis.

Three bistro tenders being joined together with transglutaminase "meat glue". They will set overnight before being unwrapped, sliced into portions, cooked, and served. 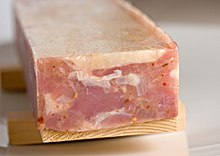 In commercial food processing, transglutaminase is used to bond proteins together. Examples of foods made using transglutaminase include imitation crabmeat, and fish balls. It is produced by Streptoverticillium mobaraense fermentation in commercial quantities (P81453) or extracted from animal blood,[11] and is used in a variety of processes, including the production of processed meat and fish products.

Transglutaminase can be used as a binding agent to improve the texture of protein-rich foods such as surimi or ham.[12]

So-called "Meat glue" made from bovine and porcine sources was banned throughout the European Union as a food additive in 2010.[13] Transglutaminase remains allowed and is not required to be declared, as it is considered a processing aid and not an additive which remains present in the final product.

Transglutaminase is also used in molecular gastronomy to meld new textures with existing tastes. Besides these mainstream uses, transglutaminase has been used to create some unusual foods. British chef Heston Blumenthal is credited with the introduction of transglutaminase into modern cooking.