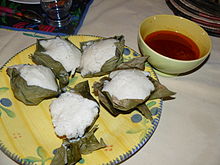 Togolese style is often a combination of African, French, and German influences.[2][4] The cuisine has many sauces and different types of pâté, many of which are made from eggplant, tomato, spinach, and fish.[2] The cuisine combines these foods with various types of meat and vegetables to create flavorful dishes.[2] Roadside food stands sell foods such as groundnuts, omelettes, brochettes, corn-on-the-cob, and cooked prawns.[3]

Additional foods and dishes include: