Political evolution of Central America and the Caribbean 1700 to present

This is a timeline of the territorial evolution of the Caribbean and nearby areas of North, Central, and South America, listing each change to the internal and external borders of the various countries that make up the region.

The region covered is the Caribbean, its islands (most of which enclose the sea), and the surrounding coasts, as well as the southern part of the Gulf of Mexico, Florida, Central America, and the northern region of South America.

The political evolution of the land surrounding the Caribbean reveals the significant role the region played in the colonial struggles of the European powers since Christopher Columbus arrived in 1492. In the 20th century the Caribbean was again important during World War II, in the decolonization wave in the post-war period, and in the tension between Communist Cuba and the United States (U.S.). Genocide, slavery, immigration and rivalry between world powers have given Caribbean history an impact disproportionate to the size of this small region. 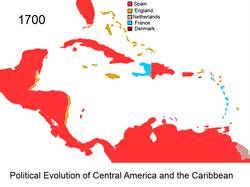 At the year 1700 Louis XIV ruled as King of France and of Navarre. In the new world he controlled:

Denmark controlled what is now the:

English forces annex the whole of the island of St. Kitts.[24] 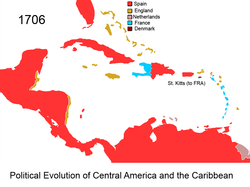 On St. Kitts the French made one more major attack on British troops in 1706 during the War of the Spanish Succession taking the whole of the island.[24] 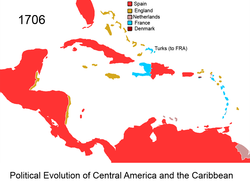 English Bermudian forces expel the French and Spanish forces from Turks in what was Bermuda's only independent military operation.[11]

The French held St. Kitts for 8 years (1713) until the Treaty of Utrecht was signed. The treaty ceded the entire island of St. Kitts to the British.[25] 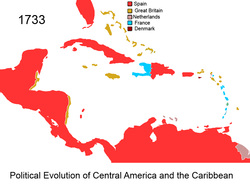 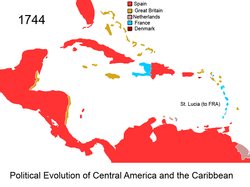 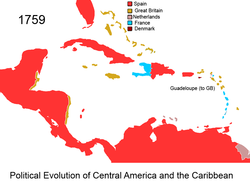 In Guadeloupe from 1759 through 1763, as a part of the Seven Years' War, the British took control of the island and the main city Pointe-à-Pitre was established during these years.[28] 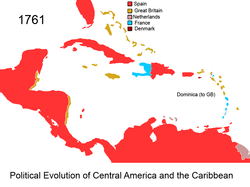 On June 7, 1761 a British expedition against Dominica led by Lord Rollo was successful and the island was conquered.[29]

Britain captured Martinique and Grenada during the Seven Years' War, holding it from 1762 to 1763.[29] Saint Lucia becomes British.[26]

The Treaty of Paris, often called the Peace of Paris, or the Treaty of 1763, was signed on February 10, 1763, by the kingdoms of Great Britain, France and Spain, with Portugal in agreement. It ended the Seven Years' War.[30] In the treaty:

The Treaty of Paris, signed on September 3, 1783, ratified by the Congress of the Confederation on January 14, 1784 and by the King of Great Britain on April 9, 1784 (the ratification documents were exchanged in Paris on May 12, 1784), formally ended the American Revolutionary War between the Kingdom of Great Britain and the United States of America, which had rebelled against British rule starting in 1775. The other combatant nations, France, Spain and the Dutch Republic had separate agreements; for details of these see Peace of Paris (1783).

After the emancipation decrees of Léger-Félicité Sonthonax and Étienne Polverel during the Haitian Revolution, the French National Convention declared the end of slavery in all French territories in February 1794, and named Victor Hugues civil commissioner to Guadeloupe. French plantation owners and other Royalists had called in the United Kingdom as a way of rejecting the freedom of slaves on the French colonies:

France came to own the whole island of Hispaniola in 1795, when in the Treaty of Basel Spain ceded Santo Domingo as a consequence of the Spain fighting against France in the French Revolutionary Wars.[48]

Effective British control of Guyana began in 1796 during the French Revolutionary Wars, at which time the Netherlands were under French occupation and Great Britain and France were at war.[49] A British expeditionary force was dispatched from its colony of Barbados to seize the colonies from the French-dominated Batavian Republic. The colonies surrendered without a struggle, and initially very little changed, as the British agreed to allow the long-established laws of the colonies to remain in force. 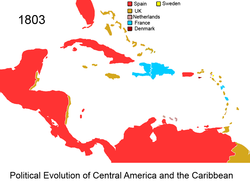 Guyana is retaken by the British.[51]

In Haiti The native leader Jean-Jacques Dessalines, long an ally of Toussaint Louverture, defeated the French troops led by Donatien-Marie-Joseph de Vimeur, vicomte de Rochambeau at the Battle of Vertières. At the end of the double battle for emancipation and independence, former slaves proclaimed the independence of Saint-Domingue on 1 January 1804, declaring the new nation as Haiti, honoring one of the indigenous Taíno names for the island. Haiti was consequently the first country in the Western Hemisphere to abolish slavery.[54] Dessalines was proclaimed Emperor for life by his troops.[55] 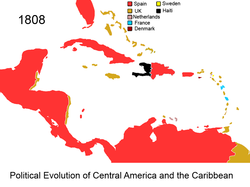 In 1808, following Napoleon's invasion of Spain, the criollos of Santo Domingo revolted against French rule and, with the aid of Great Britain (Spain's ally) and Haiti,[56] returned Santo Domingo to Spanish control.[57] 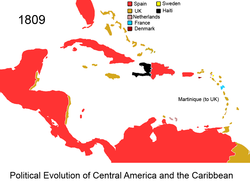 In Martinique the surrender of Fort Desaix to British forces solidified their occupation of the island of Martinique. The remaining shipping and military supplies were seized and the regular soldiers of the garrison taken as prisoners of war. The militia were disbanded and Martinique became a British colony, remaining under British command until the restoration of the French monarchy in 1814, when it was returned to French control.[58]

On November 11, 1811 the province of Cartagena declared independence from Spain. The United Provinces of New Granada was established a few days later on November 27, with Cartagena joining it. 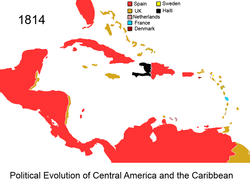 The Colombian rebellion finally succeeded in 1819 when the territory of the Viceroyalty of New Granada and the Captaincy General of Venezuela became the Republic of Gran Colombia organized as a federation of Ecuador, today's Colombia and Venezuela (Panama was part of Colombia). The official name of the country at the time was the Republic of Colombia.[60] Historians adopted the term "Gran Colombia" to distinguish this republic from the present-day Republic of Colombia, which began using the same name in 1863.[61] 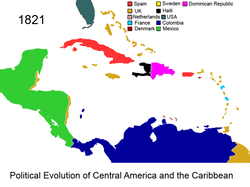 Nicaragua separated from the Federal Republic of Central America on November 5, 1838.[69] 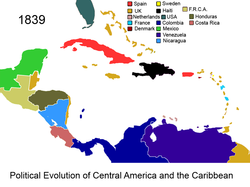 On May 30, 1838, the Central American Congress struck down Francisco Morazán's control over the Federal Republic of Central America. The Congress then declared that the individual states could establish their own governments, and on July 7, 1838 recognized these as "sovereign, free, and independent political bodies." 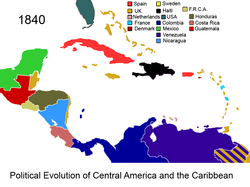 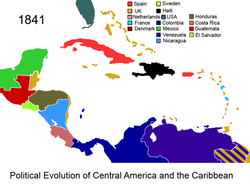 The union was only officially ended upon El Salvador's self-proclamation of the establishment of an independent republic in February 1841. 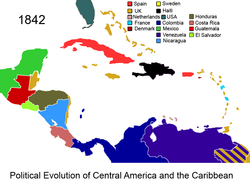 On September 11, 1842, Mexican President Antonio López de Santa Anna proclaimed the "irrevocable union" of Soconusco with Chiapas.[74] The issue between Mexico and Guatemala was not resolved until a boundary treaty was signed on September 27, 1882, when Guatemala gave up its claims to Soconusco and Chiapas.

In 1838 Juan Pablo Duarte founded a secret society called La Trinitaria, which sought the complete independence of Santo Domingo without any foreign intervention.[75] Ramón Matías Mella and Francisco del Rosario Sánchez (the latter of partly African ancestry),[76] despite not being among the founding members of La Trinitaria, were decisive in the fight for independence. Duarte and they are the three Founding Fathers of the Dominican Republic. On February 27, 1844, the Trinitarios (Trinitarians), declared the independence from Haiti. They were backed by Pedro Santana, a wealthy cattle rancher from El Seibo, who became general of the army of the nascent Republic. The Dominican Republic's first Constitution was adopted on November 6, 1844, and was modeled after the United States Constitution.[77] 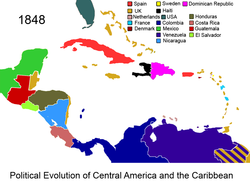 After the end of the Mexican–American War, Governor Barbachano appealed to Mexican President José Joaquín de Herrera for help in suppressing a Mayan uprising, the Caste War of Yucatán, and in exchange Yucatán again recognized the central Mexican government's authority. Yucatán was again reunited with Mexico on 17 August 1848.[78] 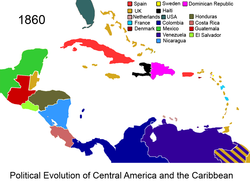 On 28 January 1860 Britain and Nicaragua concluded the Treaty of Managua, which transferred to Nicaragua the suzerainty over the entire Caribbean coast from Cabo Gracias a Dios to Greytown (now San Juan del Norte) but granted autonomy to the Miskito Indians in the more limited Mosquito Reserve (the area described above).[79]

After two years of fighting, the Spanish troops abandoned the Dominican nation. The Restoration was proclaimed on August 16, 1863.[80] 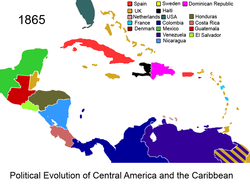 Florida is brought under US control as the CSA falls. Historians generally regard the surrender of the Army of Northern Virginia by General Lee at the village of Appomattox Court House on April 9, 1865 as the end of the Confederate States.[82] Unionists captured President Davis at Irwinville, Georgia, on May 10,[83] and the remaining Confederate armies had surrendered by June 1865. The crew of the CSS Shenandoah hauled down the last Confederate flag at Liverpool in the UK on November 6, 1865.[84] 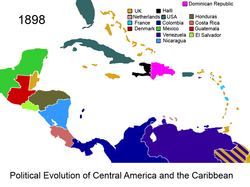 Treaty of Paris (1898) was the result of the Spanish–American War which gave control of Cuba, Puerto Rico, Guam and the Philippines to the Americans.[85]

The controversial treaty was the subject of debate in the United States Senate during the winter of 1898–1899, and it was approved on February 6, 1899 by a vote 57 to 27, only one vote more than the two-thirds majority required.[86] Only 2 Republicans voted against ratification, George Frisbie Hoar of Massachusetts and Eugene Pryor Hale of Maine.

An international tribunal arbitrate the boundary in 1897. For two years, the tribunal consisting of two Britons, two Americans, and a Russian studied the case. Their three-to-two decision, handed down in 1899, awarded 94 percent of the disputed territory to British Guiana.[87]

Theodore Roosevelt, who had fought in the Spanish–American War and had some sympathies with the independence movement granted the Republic of Cuba formal independence on May 20, 1902, with the independence leader Tomás Estrada Palma becoming the country's first president. Under the new Cuban constitution, however, the U.S. retained the right to intervene in Cuban affairs and to supervise its finances and foreign relations. Under the Platt Amendment, Cuba also agreed to lease to the U.S. the naval base at Guantánamo Bay.[88] 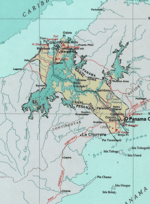 The Hay–Bunau-Varilla Treaty was signed on November 18, 1903 (two weeks after Panama's independence from Colombia on November 3, 1903). Philippe Bunau-Varilla went to Washington, D.C. and New York City to negotiate the terms with several U.S. officials, most prominently, Secretary of State John Hay. The two men negotiated the terms of sale for the building of a Panama Canal. No Panamanians signed the treaty although Bunau-Varilla was present as the diplomatic representative of Panama (a role he had purchased through financial assistance to the rebels), despite the fact he had not lived in Panama for seventeen years before the incident, and he never returned.[89]

Cuba was placed under U.S. occupation and a U.S. governor, Charles Edward Magoon, after a rebellion led by José Miguel Gómez.[88] 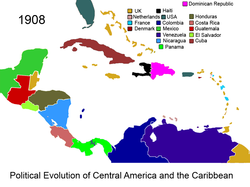 Elections were held in 1908 when José Miguel Gómez was elected president. Self-government for Cuba was restored in 1909.[88] 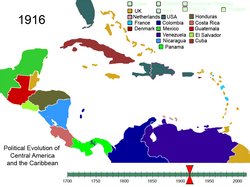 The United States begins its occupation of the Dominican Republic from 1916 to July 1924. By November of the same year they proclaim a military government.[91]

The United States ends its occupation of the Dominican Republic. Horacio Vásquez Lajara defeated Francisco J. Peynado and with his inauguration on July 13, 1924 America ends its control.[91] 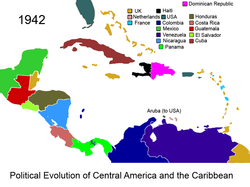 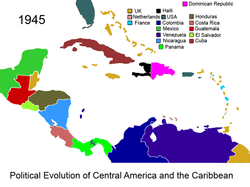 The West Indies Federation, also known as the Federation of the West Indies, was a short-lived Caribbean federation that existed from January 3, 1958 to May 31, 1962. It consisted of several Caribbean colonies including Turks and Caicos Islands, Jamaica, Cayman Islands, Antigua and Barbuda, Saint Christopher-Nevis-Anguilla, Montserrat, Dominica, Saint Lucia, Saint Vincent and the Grenadines, Grenada, Barbados and Trinidad and Tobago.[96]

With the dissolution of the West Indies Federation a number of countries decided to go alone and declare independence:

After a period of political instability following the assassination of long-time Dominican dictator Rafael Trujillo the American seize control of the Dominican Republic.[100]

On July 10, 1973, the Bahamas became fully independent from the UK, but retained membership in the Commonwealth of Nations.[104]

On September 19, 1983 Saint Kitts and Nevis became an independent nation from the United Kingdom.[113]