A territorial dispute or boundary dispute is a disagreement over the possession or control of land between two or more territorial entities. 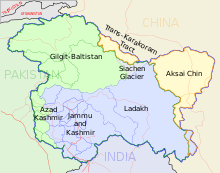 Territorial disputes are often related to the possession of natural resources such as rivers, fertile farmland, mineral or petroleum resources although the disputes can also be driven by culture, religion, and ethnic nationalism. Territorial disputes often result from vague and unclear language in a treaty that set up the original boundary.

Territorial disputes are a major cause of wars and terrorism, as states often try to assert their sovereignty over a territory through invasion, and non-state entities try to influence the actions of politicians through terrorism. International law does not support the use of force by one state to annex the territory of another state. The UN Charter states, "All Members shall refrain in their international relations from the threat or use of force against the territorial integrity or political independence of any state, or in any other manner inconsistent with the Purposes of the United Nations."

In some cases in which the boundary is not demarcated, such as the Taiwan Strait, and Kashmir, the parties involved define a line of control, which serves as the de facto international border.

Article 1 of the Montevideo Convention declares that "a person of international law should possess the following qualifications: (a) a permanent population; (b) a defined territory; (c) government; and (d) capacity to enter into relations with other States" [1]

Also, B. T. Sumner's article mentions, "In international law and relations, ownership of territory is significant because sovereignty over land defines what constitutes a state." [2]