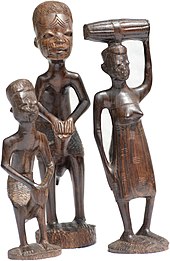 Following Tanganyika's independence (1961) and unification with Zanzibar (1964), leading to the formation of the state of Tanzania, President Julius Nyerere emphasised a need to construct a national identity for the citizens of the new country. To achieve this, Nyerere provided what is regarded as one of the most successful cases of ethnic repression and identity transformation in Africa. [1] With over 130 languages spoken within its territory, Tanzania is one of the most ethnically diverse countries in Africa. Despite this obstacle, ethnic divisions remained rare in Tanzania when compared to the rest of the continent.

A total of 130 languages are spoken in Tanzania; most of them are from the Bantu family.[2] Swahili and English are the two official languages of Tanzania. However, Swahili is the national language.[3]

Given the conditions of the period, it was not possible to introduce Swahili in the entire educational system, because the scale of the task of writing or translating textbooks for primary schools was already considerable.[citation needed] As a result, English, the colonial language since the end of World War I, is still the language of high schools and universities. Many students leave school after finishing primary education.

Although the many non-official languages in Tanzania are not actively suppressed, they do not enjoy the same linguistic rights as Swahili and English. They also face language extinction, with one, the Kw'adza language, having no remaining speakers.[2]

The music industry in Tanzania has seen many changes in the past ten years. With a fusion of local and foreign music traditions, Tanzanian musicians have grown in prominence within the African Great Lakes region. It includes artists from traditional music, such as Dionys Mbilinyi, Sabinus Komba, and many others, to new vibrant artists in R&B, pop, Zouk, Taarab, and dance.

Mwakisinini Felix is a music artist who contributed a lot in church music as a composer, trainer, and choral conductor.

Tingatinga are popular Tanzanian paintings, which are painted with enamel paints on canvas. Usually, the motifs are animals and flowers in colorful and repetitive design. The style was started by Mr. Edward Saidi Tingatinga, who was born in South Tanzania. Later, he moved to Dar es Salaam. Since his death in 1972, the Tingatinga style expanded both in Tanzania and worldwide. One of the most famous African artists, George Lilanga, was born in Tanzania. Other recognized Tanzanian abstract artists include David Mzuguno, Haji Chilonga, Salum Kambi, Max Kamundi, Thobias Minzi, Robino Ntila, John Kilaka, Godfrey Semwaiko, Evarist Chikawe, and many others (see also: http://www.artshost.org/rafiki).

Tanzania's cartoons have a history that can be traced back to the work of pioneering artists, such as Christian Gregory with his Chakubanga cartoons in the Uhuru newspaper back in the 1970s and 1980s, and Philip Ndunguru in the early 1980s. Outspokenly political cartoons were created on a more recent date.

In the past decade, the art of cartoons and comics has really taken off in Tanzania. At the present date, there are dozens of cartoonists, some of whom are well known throughout the country. From the 1960s and so on, a number of artists prepared the way, and their names are cited by today's artists as essential influences. Some of these known cartoonists in Tanzania include Ally Masoud 'kipanya', Sammi Mwamkinga, Nathan Mpangala 'Kijasti', King kinya, Adam Lutta, Fred Halla, James Gayo, Robert Mwampembwa, Francis Bonda, Popa Matumula, Noah Yongolo, Oscar Makoye, Fadhili Mohamed, and many others (see the excellent history of cartoons in Tanzania at the Worldcomics website: http://www.worldcomics.fi)

Apart from his paintings, George Lilanga, who died in 2005, was also one of Tanzania's most famous sculptors. Tanzanian craftsmen and artists have created a rich legacy of sculptures, representing abstract images of people, animals and most of all, the famous Makonde carvings of surrealist sheitani figures, made out of extremely hard ebony (mapingo) wood.

See also: Rugby union in Tanzania and Tanzania at the Olympics 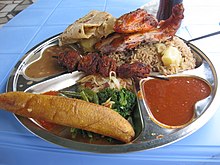 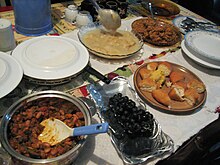 A Ramadan dinner in Tanzania

Tanzanian cuisine varies by geographical region. Along the coastal regions (Dar es Salaam, Tanga, Bagamoyo, Zanzibar, and Pemba), spicy foods are common, and there is also much use of coconut milk. Regions in Tanzania's mainland consume different foods. Some typical mainland Tanzanian foods include wali (rice), ugali (maize porridge), nyama choma (grilled meat), mshikaki (marinated beef), samaki (fish), pilau (rice mixed with a variety of spices), biriyani, and ndizi-nyama (plantains with meat). Vegetables commonly used in Tanzania include bamia (okra), mchicha (a kind of spinach), njegere (green peas), maharage (beans), and kisamvu (cassava leaves). Tanzania grows at least 17 different types of bananas which are used for soup, stew, and chips. Additionally, some breakfast food that you would typically see if you were to go to Tanzania are maandazi (fried doughnut), chai (tea), chapati (a kind of flat bread), and chipsi mayai.[4]

Since a large community of Indians have migrated into Tanzania, a considerable proportion of Tanzanian cuisine has been influenced by Indian cuisine. Famous chefs, such as Mohsin Asharia, have revolutionized traditional Indian dishes, such as kashata korma tabsi and voodo aloo. Many Indians own restaurants in the heart of Dar es Salaam, and have been welcomed by indigenous Tanzanians.