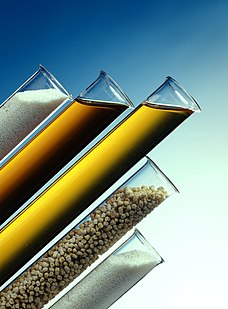 Food additives are substances added to food to preserve flavor or enhance its taste, appearance, or other qualities. Some additives have been used for centuries; for example, preserving food by pickling (with vinegar), salting, as with bacon, preserving sweets or using sulfur dioxide as with wines. With the advent of processed foods in the second half of the twentieth century, many more additives have been introduced, of both natural and artificial origin. Food additives also include substances that may be introduced to food indirectly (called "indirect additives") in the manufacturing process, through packaging, or during storage or transport.[1][2]

To regulate these additives and inform consumers, each additive is assigned a unique number called an "E number", which is used in Europe for all approved additives. This numbering scheme has now been adopted and extended by the Codex Alimentarius Commission to internationally identify all additives,[3] regardless of whether they are approved for use.

E numbers are all prefixed by "E", but countries outside Europe use only the number, whether the additive is approved in Europe or not. For example, acetic acid is written as E260 on products sold in Europe, but is simply known as additive 260 in some countries. Additive 103, alkannin, is not approved for use in Europe so does not have an E number, although it is approved for use in Australia and New Zealand. Since 1987, Australia has had an approved system of labelling for additives in packaged foods. Each food additive has to be named or numbered. The numbers are the same as in Europe, but without the prefix "E".

The United States Food and Drug Administration (FDA) lists these items as "generally recognized as safe" (GRAS);[4] they are listed under both their Chemical Abstracts Service number and FDA regulation under the United States Code of Federal Regulations.

Food additives can be divided into several groups, although there is some overlap because some additives exert more than one effect. For example, salt is both a preservative as well as a flavor.[5][1]

Acidulents
Acidulants confer sour or acid taste. Common acidulents include vinegar, citric acid, tartaric acid, malic acid, fumaric acid, and lactic acid.
Acidity regulators
Acidity regulators are used for controlling the pH of foods for stability or to affect activity of enzymes.
Anticaking agents
Anticaking agents keep powders such as milk powder from caking or sticking.
Antifoaming and foaming agents
Antifoaming agents reduce or prevent foaming in foods. Foaming agents do the reverse.
Antioxidants
Antioxidants such as vitamin C are preservatives by inhibiting the degradation of food by oxygen.

Bulking agents
Bulking agents such as starch are additives that increase the bulk of a food without affecting its taste.
Food coloring
Colorings are added to food to replace colors lost during preparation or to make food look more attractive.
Fortifying agents
Vitamins, minerals, and dietary supplements to increase the nutritional value
Color retention agents
In contrast to colorings, color retention agents are used to preserve a food's existing color.
Emulsifiers
Emulsifiers allow water and oils to remain mixed together in an emulsion, as in mayonnaise, ice cream, and homogenized milk.
Flavors
Flavors are additives that give food a particular taste or smell, and may be derived from natural ingredients or created artificially.
Flavor enhancers
Flavor enhancers enhance a food's existing flavors. A popular example is monosodium glutamate. Some flavor enhancers have their own flavors that are independent of the food.
Flour treatment agents
Flour treatment agents are added to flour to improve its color or its use in baking.
Glazing agents
Glazing agents provide a shiny appearance or protective coating to foods.
Humectants
Humectants prevent foods from drying out.
Tracer gas
Tracer gas allow for package integrity testing to prevent foods from being exposed to atmosphere, thus guaranteeing shelf life.
Preservatives
Preservatives prevent or inhibit spoilage of food due to fungi, bacteria and other microorganisms.
Stabilizers
Stabilizers, thickeners and gelling agents, like agar or pectin (used in jam for example) give foods a firmer texture. While they are not true emulsifiers, they help to stabilize emulsions.
Sweeteners
Sweeteners are added to foods for flavoring. Sweeteners other than sugar are added to keep the food energy (calories) low, or because they have beneficial effects regarding diabetes mellitus, tooth decay, or diarrhea.
Thickeners
Thickening agents are substances which, when added to the mixture, increase its viscosity without substantially modifying its other properties.
Packaging
Bisphenols, phthalates, and perfluoroalkyl chemicals (PFCs) are indirect additives used in manufacturing or packaging. In July 2018 the American Academy of Pediatrics called for more careful study of those three substances, along with nitrates and food coloring, as they might harm children during development.[6]

With the increasing use of processed foods since the 19th century, food additives are more widely used. Many countries regulate their use. For example, boric acid was widely used as a food preservative from the 1870s to the 1920s,[7][8] but was banned after World War I due to its toxicity, as demonstrated in animal and human studies. During World War II, the urgent need for cheap, available food preservatives led to it being used again, but it was finally banned in the 1950s.[7] Such cases led to a general mistrust of food additives, and an application of the precautionary principle led to the conclusion that only additives that are known to be safe should be used in foods. In the United States, this led to the adoption of the Delaney clause, an amendment to the Federal Food, Drug, and Cosmetic Act of 1938, stating that no carcinogenic substances may be used as food additives. However, after the banning of cyclamates in the United States and Britain in 1969, saccharin, the only remaining legal artificial sweetener at the time, was found to cause cancer in rats. Widespread public outcry in the United States, partly communicated to Congress by postage-paid postcards supplied in the packaging of sweetened soft drinks, led to the retention of saccharin, despite its violation of the Delaney clause.[9] However, in 2000, saccharin was found to be carcinogenic in rats due only to their unique urine chemistry.[10][11]

Periodically, concerns have been expressed about a linkage between additives and hyperactivity,[12] however "no clear evidence of ADHD was provided".[13]

In 2007, Food Standards Australia New Zealand published an official shoppers' guidance with which the concerns of food additives and their labeling are mediated.[14] In the EU it can take 10 years or more to obtain approval for a new food additive. This includes five years of safety testing, followed by two years for evaluation by the European Food Safety Authority and another three years before the additive receives an EU-wide approval for use in every country in the European Union.[15] Apart from testing and analyzing food products during the whole production process to ensure safety and compliance with regulatory standards, Trading Standards officers (in the UK) protect the public from any illegal use or potentially dangerous mis-use of food additives by performing random testing of food products.[16]

There has been significant controversy associated with the risks and benefits of food additives.[17] Natural additives may be similarly harmful or be the cause of allergic reactions in certain individuals. For example, safrole was used to flavor root beer until it was shown to be carcinogenic. Due to the application of the Delaney clause, it may not be added to foods, even though it occurs naturally in sassafras and sweet basil.[18]

A subset of food additives, micronutrients added in food fortification processes preserve nutrient value by providing vitamins and minerals to foods such as flour, cereal, margarine and milk which normally would not retain such high levels.[19] Added ingredients, such as air, bacteria, fungi, and yeast, also contribute manufacturing and flavor qualities, and reduce spoilage.[20]

Standardization of its derived products

ISO has published a series of standards regarding the topic and these standards are covered by ICS 67.220.[21]