Small Island Developing States (SIDS) are a group of developing countries that are small island countries which tend to share similar sustainable development challenges. These include small but growing populations, limited resources, remoteness, susceptibility to natural disasters, vulnerability to external shocks, excessive dependence on international trade, and fragile environments. Their growth and development is also held back by high communication, energy and transportation costs, irregular international transport volumes, disproportionately expensive public administration and infrastructure due to their small size, and little to no opportunity to create economies of scale.

The SIDS were first recognized as a distinct group of developing countries at the United Nations Conference on Environment and Development in June 1992. The Barbados Programme of Action was produced in 1994 to assist the SIDS in their sustainable development efforts. The United Nations Office of the High Representative for the Least Developed Countries, Landlocked Developing Countries and Small Island Developing States (UN-OHRLLS) represents the group of states.

Many SIDS now understand the need to move towards low-carbon, climate resilient economies, as set out in the Caribbean Community (CARICOM) implementation plan for climate change-resilient development. SIDS often rely heavily on imported fossil fuels, spending an ever-larger proportion of their GDP on energy imports. Renewable technologies have the advantage of providing energy at a lower cost than fossil fuels and making SIDS more sustainable. Barbados has been successful in adopting the use of solar water heaters (SWHs). A 2012 report published by the Climate & Development Knowledge Network showed that its SWH industry now boasts over 50,000 installations. These have saved consumers as much as US$137 million since the early 1970s. The report suggested that Barbados' experience could be easily replicated in other SIDS with high fossil fuel imports and abundant sunshine.[1]

Additionally, the implementation of targets of the United Nations Sustainable Development Goal 14 has the potential to increase economic benefits of marine resources to SIDS through aquaculture and sustainable tourism.[2] 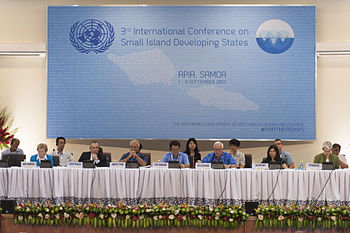 SIDS are some of the regions most vulnerable to climate change. Due to their proximity to water, SIDS are especially vulnerable to the marine effects of climate change like sea level rise, ocean acidification, marine heatwaves, and the increase in cyclone intensity. Changing precipitation patterns could also cause droughts. Many citizens of SIDS live near a coastline, meaning that they have a high risk exposure to the effects of marine climate change. Additional climate change vulnerability comes through their economies: many SIDS have economies that are based on natural resources, such as ecotourism, fishing, or agriculture. Phenomena like sea level rise, coastal erosion, and severe storms have the potential to severely impact their economies.[3]

SIDS may also have reduced financial and human capital to mitigate climate change risk, as many rely on international aid to cope with disasters like severe storms. Worldwide, climate change is projected to have an average annual loss of 0.5% GDP by 2030; in Pacific SIDS, it will be 0.75–6.5% GDP by 2030. Caribbean SIDS will have average annual losses of 5% by 2025, escalating to 20% by 2100 in projections without regional mitigation strategies.[3]

As of 2020, the United Nations Department of Economic and Social Affairs lists 52 small island developing states. They are grouped into three geographic regions: the Caribbean;[4] the Pacific;[5] and Africa, Indian Ocean, Mediterranean and South China Sea (AIMS),[6] including Associate Members of the Regional Commissions. Each of these regions has a regional cooperation body: the Caribbean Community, the Pacific Islands Forum and the Indian Ocean Commission respectively, which many SIDS are members or associate members of. In addition, most (but not all) SIDS are members of the Alliance of Small Island States (AOSIS), which performs lobbying and negotiating functions for the SIDS within the United Nations system. The UNCTAD website states that "the UN never established criteria to determine an official list of SIDS" but UNCTAD maintains a shorter, unofficial list on its website for analytical purposes.[7]