The geography and modes of food production within Sikkim inform the food culture within the state.[2] The economy of Sikkim is largely agrarian.[3] Due to the state's mountainous terrain, much of the land is unsuitable for farming, so terrace farming, particularly of rice, is common. In addition to rice, other cereal crops cultivated in Sikkim include wheat, maize, barley, and millet. Potatoes, ginger, oranges, tea, and cardamom are also cultivated.[4][5] Sikkim produces the most cardamom of any Indian state, about 4200 tons annually.[6] Vegetables commonly grown include tomatoes, broccoli, and iskus.[7]

Although dairy and, to a lesser extent, meat products are common elements of the Sikkimese diet, livestock primarily plays a subsidiary role in Sikkim's agricultural sector. Cattle, sheep, goats, pigs, yaks, and pigs are raised. 11.7% of people in the rural areas of Sikkim are vegetarian.[8] 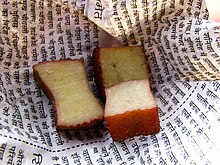 Fermented foods and beverages are an integral part of Sikkimese cuisine, comprising 12.6% of total food consumption in the state. Polling indicates that 67.7% of Sikkimese people prepare fermented foods at home rather than purchasing them. This suggests that most fermentation is done at the household level with the notable exceptions of chhurpi and marchaa (a starter culture for fermentation), which are purchased in markets.[8]

Various fermented alcoholic beverages are produced by the introduction of marchaa to a cereal grain and subsequent saccharification and fermentation in an airtight vessel. Millet, rice, and maize are commonly used. The grain is washed, cooked, combined with marchaa, then saccharified in an earthware pot for about 1-2 days, then fermented for 2-8 days.[10]

In the morning, many Sikkimese individuals drink a full mug of tea and have curry as a meal.[14]