Sideritis (Gr: σιδηρίτις), also known as ironwort,[1] mountain tea and shepherd's tea, is a genus of flowering plants well known for their use as herbal medicine, commonly as an herbal tea. They are abundant in Mediterranean regions, the Balkans, the Iberian Peninsula and Macaronesia, but can also be found in Central Europe and temperate Asia.[2][3][4][5]

In Greek "sideritis" can be literally translated as "he who is made of iron". The plant was known to ancient Greeks, specifically Pedanius Dioscorides and Theophrastus.[6] Although Dioscorides describes three species, only one (probably S. scordioides) is thought to belong to Sideritis. In ancient times "sideritis" was a generic reference for plants capable of healing wounds caused by iron weapons during battles. However, others hold that the name stems from the shape of the sepal, which resembles the tip of a spear.[3]

In 2002, molecular phylogenetic research found Sideritis and five other genera to be embedded in Stachys.[7] Further studies will be needed before Stachys, Sideritis, and their closest relatives can be revised.

Some schemes recognize and categorize up to 319 distinct species, subspecies, ecotypes, forms or cultivars, including:[8][3]

Botanists have encountered difficulties in naming and classifying the varieties of Sideritis due to their subtle differences. One particularly confusing case is that of S. angustifolia Lagasca and S. tragoriganum Lagasca.[9]

It is pubescent, either villous or coated by a fine, woolly layer of microscopic intertwined hairs. 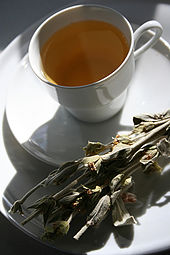 Very popular in Albania, Bulgaria, Greece, Kosovo, North Macedonia and Turkey, , , Sideritis syriaca, and various others species from the section Empedoclia are used as a herb either for the preparation of herbal teas, or for its aromatic properties in local cuisines. The herbal tea is commonly prepared by decoction, by boiling the stems, leaves and flowers in a pot of water, then often serving with honey and lemon.

Ironwort has been traditionally used to aid digestion, strengthen the immune system and suppress common cold, the flu and other viruses, allergies and shortness of breath, sinus congestion, even pain and mild anxiety.

Scientists have suggested that the popular pronouncement of ironwort as panacea may have some basis in fact. Studies indicate a positive effect on many common ailments.[12] Ironwort is known scientifically to be anti-microbial, anti-inflammatory, and anti-oxidant. Active elements include diterpenoid and flavonoids.[13] Significant research has been done on ironwort confirming its popular use to prevent colds, flu, and allergies. Most of this research has taken place in universities in the Netherlands and in the southern Balkans where the plant is indigenous.[14]

Sideritis raeseri is the most commonly cultivated Sideritis in Albania, Bulgaria, Greece and North Macedonia, where advanced hybrids also exist.[5] Planting is recommended during two periods (October–November or February–March in the Northern hemisphere) and gathering in July, when in full bloom. The plant is typically dried before usage.[15]