A sausage roll is a savoury pastry snack, popular in Commonwealth nations. They are sold at retail outlets and are also available from bakeries as a take-away food. A miniature version can be served as buffet or party food. Similar meat and pastry recipes include the Czech klobásník, the Dutch saucijzenbroodje, the German Münsterländer Wurstbrötchen and sausage bread in the United States. 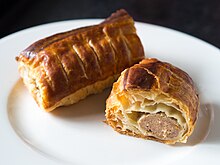 A Dutch sausage roll (saucijzenbroodje) showing the puff pastry surrounding the roll of minced meat inside.

The basic composition of a sausage roll is sheets of puff pastry formed into tubes around sausage meat and glazed with egg or milk before being baked.[1] They can be served either hot or cold. In the 19th century, they were made using shortcrust pastry instead of puff pastry.[2]

A vegetarian or vegan sausage roll can be made in the same manner, using a meat substitute.[3] 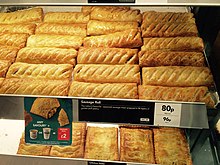 Sausage rolls for sale in Britain

In the UK, the bakery chain Greggs sells around 2.5 million sausage rolls per week,[4] or around 140 million per year.[5]

The wrapping of meat or other foodstuffs into dough can be traced back to the Classical Greek or Roman eras. However sausage rolls in the modern sense of meat surrounded by rolled pastry, appear to have been conceived at the beginning of the 19th century in France. From the beginning, use was made of flaky pastry, which in turn originated with the Hungarian croissant of the late 17th century. Early versions of the roll with pork as a filling proved popular in London during the Napoleonic Wars and it became identified as an English dish.[citation needed]

On 20 September 1809, the Bury and Norwich Post mentions T. Ling, aged 75, (an industrious vendor of saloop, buns, and sausage rolls).[6] The Times first mentions the food item in 1864 when William Johnstone, "wholesale pork pie manufacturer and sausage roll maker", was fined £15 (2015: £1,300), under the Nuisances Removal Act (Amendment) Act 1863, for having on his premises a large quantity of meat unsound, unwholesome and unfit for food.[7] In 1894, a theft case provided further insights into the Victorian sausage roll production whereby the accused apprentice was taught to soak brown bread in red ochre, salt, and pepper to give the appearance of beef sausage for the filling.[8]