Salvadoran cuisine is a style of cooking derived from the nation of El Salvador. The traditional foods consist of a mix of Native American cuisine from indigenous groups such as the Lenca, Pipil, Xinca, Poqomam, Chʼortiʼ, Alaguilac, Mixe, Mangue, and Cacaopera peoples with influences from Spanish cuisine. Many of the dishes are made with maize (corn). There is also heavy use of pork and seafood.

El Salvador's most notable dish is the pupusa, a thick handmade corn flour or rice flour flatbread stuffed with cheese, chicharrón (cooked pork meat ground to a paste consistency), refried beans or loroco (a vine flower bud native to Central America). There are also vegetarian options, often with ayote (a type of squash) or garlic. Some restaurants even offer pupusas stuffed with shrimp or spinach which are served with salsa roja, a cooked tomato sauce, often served with curtido. Pollo encebollado is another popular Salvadoran dish that contains chicken simmered with onions. Salvadoran cheeses, queso duro (hard cheese), queso fresco (fresh cheese), and cuajada, are eaten with meals.

Two other typical Salvadoran dishes are and . Yuca frita is deep-fried cassava root served with curtido (a pickled cabbage, onion and carrot topping) and chicharron with pepesca (fried baby sardines). The yuca is sometimes served boiled instead of fried. Panes rellenos ("stuffed bread") are warm submarine sandwiches. The turkey or chicken is marinated and then roasted with Pipil spices and hand-pulled. This sandwich is traditionally served with turkey or chicken, tomato, and watercress along with cucumber, cabbage, and traditional stuffed panes do not include mayonnaise.

El Salvador is known for different types of tamales, which are usually wrapped in plantain leaves. These tamales include: 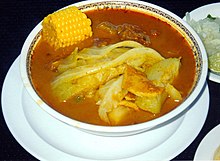 Soups and salads are popular among Salvadorans of every social level.

Sopa de pata is a soup made from the tripe of a cow, plantain, corn, tomatoes, cabbage and spices, locally a delicacy.

Sopa de res is a soup made from beef shank, beef bone with meat, carrots, plantain, corn, potatoes, zucchini, and many other ingredients.

Gallo en chicha is a soup made with rooster, corn, dulce de tapa, and sometimes other things.

Sopa de pescado is a soup made out of fish or seafood with corn flour, tomatoes, green peppers, cumin, achiote and other ingredients, commonly eaten for the Christian holiday of Good Friday.

Sopa de gallina india is a chicken broth with vegetables. Some people add lorocos and cream.

Salpicón is a dish made with minced beef, mint and onions. Some people add rice.

(stuffed bread) are warm sandwiches, often made with chicken, carne asada, or turkey. The chicken or turkey is marinated and then roasted with Pipil spices and hand-pulled. This sandwich is traditionally served with tomatoes, cucumbers, lettuce, and watercress.

Alguashte is a seasoning typical of Salvadoran cuisine made from ground pepitas (pumpkin seeds). Alguashte likely has Mayan origins, as pepitas have been consumed in Mesoamerica for several centuries

A very popular soda that originated in El Salvador is , which is a soda with sugar cane flavor. Minutas, shaved ice flavored with fruit flavored syrup, and horchata, a beverage made from rice milk and a mix of spices such as cinnamon, peanut beverage, ajonjolí (sesame seeds) and morro, are popular throughout the country and enjoyed on a hot day.

Licuados are like the minutas with added fresh fruit and (sometimes) milk. Refrescos refer to lemonades or other sweetened fruit drinks. Other drinks include , Chuco and Chilate. Another popular beverage is ensalada ("salad"), made of pineapple juice with finely chopped fruits, usually apples, marañón, mamey, and watercress.

Tamarindo juice is consumed in all of El Salvador. Coconuts are sold at roadside estansas throughout the country. Typically, they are chopped with machetes and a straw is inserted so that the coconut water can be consumed. Adults drink coconut milk, mixed with vodka, as an aperitif. Vinagre de piña is a drink of trimmed pineapples mixed with Panela and water and set aside to ferment for a few weeks or even months.

The most common alcoholic beverage in El Salvador is beer (cerveza). The most popular brand name is . Suprema is considered the premier local brew. Both of these and other popular beers are made by . More recently, Cerveza Cadejo[2] has become increasingly popular in El Salvador. Cadejo is a microbrewery based in San Salvador that was inspired by US microbreweries.[3]

The national liquor of El Salvador is Tic Tack, a sugar cane distillate. Tick Tack has similar flavors to cachaça.

Salvadorans eat a large variety of seafood. Salvadoran ceviches are made with clams, oysters, fish, shrimp, snails, octopus, squid, and a type of black clam called conchas by locals. Cocktails and ceviches are prepared with a type of tomato and chopped onion sauce or a dark sauce called Salsa Perring, which is a local way of pronouncing Lea & Perrins Worcestershire sauce, and both are sprinkled with lemon juice.