Idiyappam (Malayalam: ഇടിയപ്പം, Tamil: இடியாப்பம்), also known as nool puttu (Malayalam: നൂൽപ്പുട്ട്, Tamil: நூல்புட்டு) or string hopper, or noolappam (Malayalam: നൂലപ്പം), is a rice noodle dish originating from the Indian states of Kerala and Tamil Nadu and as well as from Sri Lanka. It consists of rice flour pressed into noodles, woven into a flat disc-like shape and steamed. The dish also spread to Southeast Asia, where it is called putu mayam in Malaysian and putu mayang in Indonesian.

According to food historian K. T. Achaya, Idiyappam and Appam were already known in ancient Tamil country around 1st century AD, as per references in the Sangam literature.[1]

The origins of these dishes may stem from South India and Sri Lanka, northern and eastern Sri Lanka, where a similar rice flour noodle is served with sugar and coconut, and sometimes banana too, and is known as idiyappam.

Idiyappam is a culinary speciality in Sri Lanka and throughout the Indian states of Tamil Nadu, Kerala, and Karnataka. The name idiyappam derives from the Tamil and Malayalam word idi (meaning beat) and appam, (meaning pancake). The dish is also, frequently, called noolappam or noolputtu, originating from the Tamil and Malayalam word nool, meaning string or thread. In coastal areas of Karnataka, such as Mangalore and Udupi, it is also termed semige or semé da addae in Tulu. It is eaten with Tuluva chicken or fish curry, and a coconut milk dish called rasayana.[2] It is also a common breakfast item in Malaysia, where it is called putumayam, typically served with brown sugar and grated coconut. 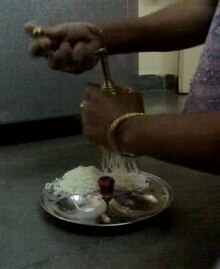 It is made of rice flour or ragi flour (Finger millet flour), salt and water. It is generally served as the main course at breakfast or dinner together with a curry (potato, egg, fish or meat curry) and coconut chutney. It is served with coconut milk and sugar in the Malabar region of Kerala. It is not usually served at lunch. In other parts of Kerala, Sri Lanka and Tamil Nadu, it is mostly eaten with spicy curries. Using wheat flour in its preparation gives it a brownish hue.

Mix rice flour with hot water, optionally add ghee, season with salt. Knead into a smooth dough. Fill an 'idiyappam' press or a sieve with the dough and press the noodles onto banana leaves or directly into an idli steamer. Add a little grated coconut if desired. Steam for 5–10 minutes. The idiyappam is served with coconut gratings and coconut milk.[3][4][5]

The process for making putu mayam consists of mixing rice flour or idiyappam flour with water and/or coconut milk, and pressing the dough through a sieve to make vermicelli-like noodles. These are steamed, usually with the addition of juice from the aromatic pandan leaf (screwpine) as flavouring. The noodles are served with grated coconut and jaggery, or, preferably, (date palm sugar). In some areas, gula melaka (coconut palm sugar) is the favourite sweetener. Putu piring is a Malaysian version of putu mayam in which the rice flour dough is used to form a small cake around a filling of coconut and gur or jaggery.[6][unreliable source?]

In Malaysia and Singapore, putu mayam and its relatives are commonly sold as street food from market stalls or carts, as well as being made at home, and are usually served cold. In Indonesia, putu mayam is called Putu mayang and is served with palm sugar mixed with coconut milk.

This dish may be eaten for breakfast with a vegetable stew or aviyal, or a fish curry, etc. The same liking for serving the slightly sweet putu mayam, putu piring, or cendol with savoury dishes also occurs in Malaysia and Singapore. Idiyappam is typical of Tamil Nadu, Kerala and other southern Indian states, as well as Sri Lanka. A very finely ground, commercial iddiyapam flour is sold as a sort of "instant" way to make all of these dishes.