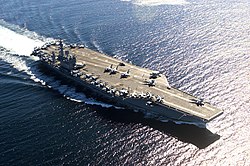 Aircraft carriers such as the USS Nimitz play an important role in modern power projection.

Power projection (or force projection or strength projection) is a term used in international relations to refer to the capacity of a state to deploy and sustain forces outside its territory.[1]

This ability is a crucial element of a state's power in international relations. Any state able to direct its military forces outside its territory might be said to have some level of power projection capability, but the term itself is used most frequently in reference to militaries with a worldwide reach (or at least significantly broader than a state's immediate area). Even states with sizable hard power assets (such as a large standing army) may only be able to exert limited regional influence so long as they lack the means of effectively projecting their power on a global scale. Generally, only a select few states are able to overcome the logistical difficulties inherent in the deployment and direction of a modern, mechanized military force.

While traditional measures of power projection typically focus on hard power assets (tanks, soldiers, aircraft, naval vessels, etc.), the developing theory of soft power notes that power projection does not necessarily have to involve the active use of military forces in combat. Assets for power projection can often serve dual uses, as the deployment of various countries' militaries during the humanitarian response to the 2004 Indian Ocean earthquake illustrates. The ability of a state to project its forces into an area may serve as an effective diplomatic lever, influencing the decision-making process and acting as a potential deterrent on other states' behavior.

Early examples of power projection includes Roman dominance of Europe: the ability to project power is tied to the ability to innovate and field such innovations. Roman engineering innovations such as machines (pile driver), concrete, aqueducts and modern roads provided the footing for an economic engine that powered a military that was unmatched in its day. Examples of Roman power projection include Julius Caesar constructing the Rhine bridge in 10 days to demonstrate the ability to march his 40,000 troops as he saw fit: the local inhabitants enjoyed the natural protection of the river and fled when this natural protection was overcome. Although Rome is far from the center of modern power, its influence can be seen in the architecture of modern capitols around the world (domes, arches, columns). The demonstration of an extraordinary innovative military capability will signal power and, when properly applied, terminate conflicts summarily.[citation needed]

During the Ming treasure voyages in the 15th century, the Chinese treasure fleet was heavily militarized to exercise power projection around the Indian Ocean and thereby promote its interests.[2]

The modern ability to project power and exert influence on a global scale can be tied to innovations stemming from the Industrial Revolution and the associated modernizations in technology, communications, finance and bureaucracy; this finally allowed the state to create unprecedented amounts of wealth and to effectively marshal these resources to exert power over long distances.[citation needed]

The first such industrial-technological power was the British Empire in the 19th century. As a maritime power, its strength and ability to project power to further its interests lay in the Royal Navy. A worldwide system of naval bases and coaling stations, a large logistical bureaucracy to oversee shipbuilding, the supply of coal, food, water, and sailors, and an industrial base for the manufacture and technological enhancement of the fleet were among the essential ingredients for this capability. During the First Opium War (1839–42), it was this capacity that enabled a British expeditionary force of 15 barracks ships, 4 steam-powered gunboats and 25 smaller boats with 4,000 marines to successfully defend its interests 6,000 miles from the fleet's home port.[3]

An illustration of the burning of Magdala, an event which took place during the British Expedition to Abyssinia in 1868. The expedition came about as a result of Tewodros II of Ethiopia's imprisonment of European missionaries and officials, and demonstrated the power projection capabilities of the British Empire.

The Anglo-French expeditionary force sent to shore up the Ottoman Empire against Russian aggression during the Crimean War (1853–56) was one of the first examples of a planned expeditionary power-projection campaign. It was the first campaign to use modern technology, including steam-powered warships and telegraph communications.[citation needed]

Another illustrative example of industrial power projection, was the British Expedition to Abyssinia in 1868 as a retaliation against Emperor Tewodros II of Ethiopia's imprisonment of several missionaries and British government representatives. The expeditionary force sent was a tremendous logistical and technological challenge at the time. Commanded by Lieutenant-General Sir Robert Napier of the Bombay Army, military intelligence was used to estimate the required size of the army and the difficulties of traversing the inhospitable terrain.[citation needed]

A force of over 30,000 was shipped from British India to Zula on the Red Sea on a fleet of more than 280 steam ships, while an advance detachment of engineers built a large port with two piers, warehouses and a lighthouse, and constructed a 20-mile-long railway towards the interior.[4] A road was also built for the artillery to be moved along with the help of elephants. After three months of trekking, the British force repelled an Ethiopian attack and launched an artillery bombardment against the fortress of Magdala which led to its capitulation; Tewodros committed suicide.[5][6]

In the Russo-Japanese War of 1904–05, the Japanese destruction of the Imperial Russian Navy's Pacific Fleet demonstrated Imperial Russia's inability to project force in the East. This immediately diminished Russia's diplomatic sway in that region. At the same time, Russia's western armies became less credible, as mobilization exposed organizational flaws and threw the western armies into chaos. This led analysts in Europe, such as German chief of staff Count Alfred von Schlieffen, to conclude that Russia would prove inept at projecting force in Europe, thus demoting Russia in European diplomatic relations.

Many other actions can be considered projections of force. The 19th century is full of incidents such as the 1864 Shimonoseki campaign and the Boxer Rebellion. More recently, the Falklands War provided an example of the United Kingdom's ability to project force far from home. Other recent examples of power projection include the U.S.-led invasion of Iraq and the NATO bombing of Yugoslavia. The ability of the U.S. Navy, the British Royal Navy, and the French Navy to deploy large numbers of ships for long periods of time away from home are notable projection abilities.[citation needed]

The cargo hold and intercontinental flight capabilities of the C-5 Galaxy make it a major asset for deploying military equipment around the globe.

The U.S. Department of Defense defines power projection as the "ability of a nation to apply all or some of its elements of national power—political, economic, informational, or military—to rapidly and effectively deploy and sustain forces in and from multiple dispersed locations to respond to crises, to contribute to deterrence, and to enhance regional stability".[7]

As distance between a fighting force and its headquarters increases, command and control inevitably becomes more difficult. Modern-day power projection often employs high-tech communications and information technology to overcome these difficulties, a process sometimes described as the "Revolution in Military Affairs".

While a few long-range weapons such as the intercontinental ballistic missiles (ICBMs) and some unmanned combat aerial vehicles (drones) are capable of projecting deadly force in their own right, it is military logistics that is at the heart of power projection. The ability to integrate naval and air forces with land armies as part of joint warfare is a key aspect of effective power projection; airlift and sealift capabilities facilitate the deployment of soldiers and weapons to a distant theater of war.

The aircraft carrier strike group, strategic bomber, ballistic missile submarine, and strategic airlifter are all examples of power projection platforms. Military units designed to be light and mobile, such as airborne forces (paratroopers and air assault forces) and amphibious assault forces, are utilized in power projection. Forward basing is another method of power projection, which, by pre-positioning military units or stockpiles of arms at strategically located military bases outside a country's territory, reduces the time and distance needed to mobilize them.

Examples of soft power projection include:

Examples of hard power projection include: