In international relations, power is defined in several different ways.[1] Material definitions of state power emphasize economic and military power.[2][3][4] Other definitions of power emphasize the ability to structure and constitute the nature of social relations between actors.[5][4] Power is an attribute of particular actors in their interactions, as well as a social process that constitutes the social identities and capacities of actors.[5]

Michael Barnett and Raymond Duvall define power as "the production, in and through social relations, of effects that shape the capacities of actors to determine their circumstances and fate."[5] They reject definitions of power that conflate power as any and all effects because doing so makes power synonymous with causality.[5] They also reject persuasion as part of the definition of power, as it revolves around actors freely and voluntarily changing their minds once presented with new information.[5]

Power as a goal

The primary usage of "power" as a goal in international relations belongs to political theorists, such as Niccolò Machiavelli and Hans Morgenthau.[7] Especially among Classical Realist thinkers, power is an inherent goal of mankind and of states. Economic growth, military growth, cultural spread etc. can all be considered as working towards the ultimate goal of international power. The German military thinker Carl von Clausewitz[8] is considered to be the quintessential projection of European growth across the continent. In more modern times, Claus Moser has elucidated theories centre of distribution of power in Europe after the Holocaust, and the power of universal learning as its counterpoint.[9] Jean Monnet[10] was a French left-wing social theorist, stimulating expansive Eurocommunism, who followed on the creator of modern European community, the diplomat and statesman Robert Schuman.[11] 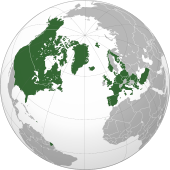 Political scientists principally use "power" in terms of an actor's ability to exercise influence over other actors within the international system. This influence can be coercive, attractive, cooperative, or competitive. Mechanisms of influence can include the threat or use of force, economic interaction or pressure, diplomacy, and cultural exchange.

Under certain circumstances, states can organize a sphere of influence or a bloc within which they exercise predominant influence. Historical examples include the spheres of influence recognized under the Concert of Europe, or the recognition of spheres during the Cold War following the Yalta Conference. The Eastern Bloc, the Western Bloc, and the Non-Aligned Movement were the blocs that arose out of the Cold War contest. Military alliances like NATO and the Warsaw Pact are another forum through which influence is exercised. However, "realist" theory attempted to maintain the balance of power from the development of meaningful diplomatic relations that can create a hegemony within the region. British foreign policy, for example, dominated Europe through the Congress of Vienna after the defeat of France. They continued the balancing act with the Congress of Berlin in 1878, to appease Russia and Germany from attacking Turkey. Britain has sided against the aggressors on the European continent—i.e. the German Empire, Nazi Germany, Napoleonic France or the Austrian Empire, known during the Great War as the Central Powers and, in World War II as the Axis Powers.[14][15]

International orders have both a material and social component.[16] Martha Finnemore argues that unipolarity does not just entail a material superiority by the unipole, but also a social structure whereby the unipole maintains its status through legitimation, and institutionalization. In trying to obtain legitimacy from the other actors in the international system, the unipole necessarily gives those actors a degree of power. The unipole also obtains legitimacy and wards off challenges to its power through the creation of institutions, but these institutions also entail a diffusion of power away from the unipole.[17] David Lake has argued along similar lines that legitimacy and authority are key components of international order.[18][19]

Susan Strange made a key contribution to International Political Economy on the issue of power, which she considered essential to the character and dynamics of the global economy.[20] Strange was skeptical of static indicators of power, arguing that it was structural power that mattered.[21] In particular, interactions between states and markets mattered.[22] She pointed to the superiority of the American technology sector, dominance in services, and the position of the U.S. dollar as the top international currency as real indicators of lasting power.[23] She distinguished between relational power (the power to compel A to get B to do something B does not want to do) and structural power (the power to shape and determine the structure of the global political economy).[24] Political scientists Henry Farrell and Abraham L. Newman argue that state power is in part derived from control over important nodes in global networks of informational and financial exchange, which means that states can "weaponize interdependence" by fighting over control of these nodes.[25]

Power is also used when describing states or actors that have achieved military victories or security for their state in the international system. This general usage is most commonly found among the writings of historians or popular writers.

Power is the capacity to direct the decisions and actions of others. Power derives from strength and will. Strength comes from the transformation of resources into capabilities. Will infuses objectives with resolve. Strategy marshals capabilities and brings them to bear with precision. Statecraft seeks through strategy to magnify the mass, relevance, impact, and irresistibility of power. It guides the ways the state deploys and applies its power abroad. These ways embrace the arts of war, espionage, and diplomacy. The practitioners of these three arts are the paladins of statecraft.[26]

Power is also used to describe the resources and capabilities of a state. This definition is quantitative and is most often[dubious – discuss] used by geopoliticians and the military. Capabilities are thought of in tangible terms—they are measurable, weighable, quantifiable assets. A good example for this kind of measurement is the Composite Indicator on Aggregate Power, which involves 54 indicators and covers the capabilities of 44 states in Asia-Pacific from 1992 to 2012.[27] Hard power can be treated as a potential and is not often enforced on the international stage.

Chinese strategists have such a concept of national power that can be measured quantitatively using an index known as comprehensive national power.

Michael Beckley argues that gross domestic product and military spending are imprecise indicators of power. He argues that better measurements of power should take into account "net" indicators of powers: "[Gross] indicators systematically exaggerate the wealth and military capabilities of poor, populous countries, because they tally countries’ resources without deducting the costs countries pay to police, protect, and serve their people. A country with a big population might produce vast output and field a large army, but it also may bear massive welfare and security burdens that drain its wealth and bog down its military, leaving it with few resources for power projection abroad."[28]

Much effort in academic and popular writing is devoted to deciding which countries have the status of "power", and how this can be measured. If a country has "power" (as influence) in military, diplomatic, cultural, and economic spheres, it might be called a "power" (as status). There are several categories of power, and inclusion of a state in one category or another is fraught with difficulty and controversy. In his famous 1987 work, The Rise and Fall of the Great Powers, British-American historian Paul Kennedy charts the relative status of the various powers from AD 1500 to 2000. He does not begin the book with a theoretical definition of "great power"; however he lists them, separately, for many different eras. Moreover, he uses different working definitions of great power for different eras. For example;

"France was not strong enough to oppose Germany in a one-to-one struggle... If the mark of a Great Power is country which is willing to take on any other, then France (like Austria-Hungary) had slipped to a lower position. But that definition seemed too abstract in 1914 to a nation geared up for war, militarily stronger than ever, wealthy, and, above all,. endowed with powerful allies."[29]

Neorealist scholars frequently define power as entailing military capabilities and economic strength.[2][3][30] Classical realists recognized that the ability to influence depended on psychological relationships that touched on ethical principles, legitimacy and justice,[31] as well as emotions, leaders' skill and power over opinion.[32][31][33]

In the modern geopolitical landscape, a number of terms are used to describe various types of powers, which include the following:

Some political scientists distinguish between two types of power: Hard and Soft. The former is coercive (example: military invasion) while the latter is attractive (example: broadcast media or cultural invasion).

Hard power refers to coercive tactics: the threat or use of armed forces, economic pressure or sanctions, assassination and subterfuge, or other forms of intimidation. Hard power is generally associated to the stronger of nations, as the ability to change the domestic affairs of other nations through military threats. Realists and neorealists, such as John Mearsheimer, are advocates of the use of such power for the balancing of the international system.

Joseph Nye is the leading proponent and theorist of soft power. Instruments of soft power include debates on cultural values, dialogues on ideology, the attempt to influence through good example, and the appeal to commonly accepted human values. Means of exercising soft power include diplomacy, dissemination of information, analysis, propaganda, and cultural programming to achieve political ends.

Others have synthesized soft and hard power, including through the field of smart power. This is often a call to use a holistic spectrum of statecraft tools, ranging from soft to hard.