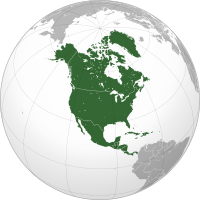 North America is a continent in the Northern Hemisphere and almost entirely within the Western Hemisphere. It can also be described as the northern subcontinent of a single continent, America. It is bordered to the north by the Arctic Ocean, to the east by the Atlantic Ocean, to the southeast by South America and the Caribbean Sea, and to the west and south by the Pacific Ocean. Because it is on the North American Tectonic Plate, Greenland is included as part of North America geographically.

North America covers an area of about 24,709,000 square kilometers (9,540,000 square miles), about 16.5% of the Earth's land area and about 4.8% of its total surface. North America is the third-largest continent by area, following Asia and Africa, and the fourth by population after Asia, Africa, and Europe. In 2013, its population was estimated at nearly 579 million people in 23 independent states, or about 7.5% of the world's population.

North America was reached by its first human populations during the last glacial period, via crossing the Bering land bridge approximately 40,000 to 17,000 years ago. The so-called Paleo-Indian period is taken to have lasted until about 10,000 years ago (the beginning of the Archaic or Meso-Indian period). The classic stage spans roughly the 6th to 13th centuries. The first recorded Europeans to visit North America (other than Greenland) were the Norse around 1000 AD. Christopher Columbus's arrival in 1492 sparked a transatlantic exchange which included migrations of European settlers during the Age of Discovery and the early modern period. Present-day cultural and ethnic patterns reflect interactions between European colonists, indigenous peoples, African slaves, immigrants from Europe, Asia, and South Asia, and the descendants of these groups.

Owing to Europe's colonization of the Americas, most North Americans speak European languages such as English, Spanish or French, and their cultures commonly reflect Western traditions. However, in parts of Canada, the United States, Mexico, and Central America, there are indigenous populations continuing their cultural traditions and speaking their own languages. (Full article...) 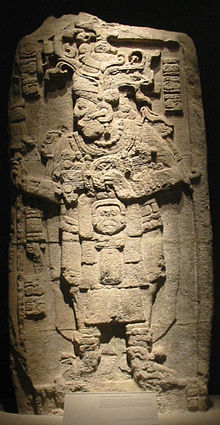 Stela 51 from Calakmul, dating to 731, is the best preserved monument from the city. It depicts the king Yuknoom Tookʼ Kʼawiil.

Maya stelae (singular stela) are monuments that were fashioned by the Maya civilization of ancient Mesoamerica. They consist of tall, sculpted stone shafts and are often associated with low circular stones referred to as altars, although their actual function is uncertain. Many stelae were sculpted in low relief, although plain monuments are found throughout the Maya region. The sculpting of these monuments spread throughout the Maya area during the Classic Period (250–900 AD), and these pairings of sculpted stelae and circular altars are considered a hallmark of Classic Maya civilization. The earliest dated stela to have been found in situ in the Maya lowlands was recovered from the great city of Tikal in Guatemala. During the Classic Period almost every Maya kingdom in the southern lowlands raised stelae in its ceremonial centre.

Stelae became closely associated with the concept of divine kingship and declined at the same time as this institution. The production of stelae by the Maya had its origin around 400 BC and continued through to the end of the Classic Period, around 900, although some monuments were reused in the Postclassic (c. 900–1521). The major city of Calakmul in Mexico raised the greatest number of stelae known from any Maya city, at least 166, although they are very poorly preserved. (Full article...)

This is a Featured picture that the Wikimedia Commons community has chosen as one of the highest quality on the site.

The airship USS Akron flying over the southern tip of Manhattan circa 1931–1933. The Akron was a commissioned 'ship' of the United States Navy, built for them by the Goodyear Zeppelin Corporation in Akron, Ohio. She cast off for her maiden voyage on 2 November 1931, but crashed less than two years later. 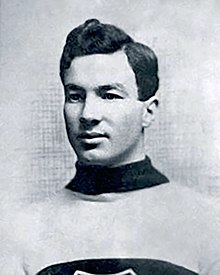 Ross with the Montreal Wanderers, circa 1907–18

Arthur Howe Ross (January 13, 1885 – August 5, 1964) was a Canadian professional ice hockey player and executive from 1905 until 1954. Regarded as one of the best defenders of his era by his peers, he was one of the first to skate with the puck up the ice rather than pass it to a forward. He was on Stanley Cup championship teams twice in a playing career that lasted thirteen seasons; in January 1907 with the Kenora Thistles and 1908 with the Montreal Wanderers. Like other players of the time, Ross played for several different teams and leagues, and is most notable for his time with the Wanderers while they were members of the National Hockey Association (NHA) and its successor, the National Hockey League (NHL). In 1911 he led one of the first organized player strikes over increased pay. When the Wanderers' home arena burned down in January 1918, the team ceased operations and Ross retired as a player.

After several years as an on-ice official, he was named head coach of the Hamilton Tigers for one season. When the Boston Bruins were formed in 1924, Ross was hired as the first coach and general manager of the team. He would go on to coach the team on three separate occasions until 1945 and stayed as general manager until his retirement in 1954. Ross helped the Bruins finish first place in the league ten times and to win the Stanley Cup three times; Ross personally coached the team to two of those victories. After being hired by the Bruins, Ross, along with his wife and two sons, moved to a suburb of Boston, and he became an American citizen in 1938. He died near Boston in 1964. (Full article...)

This is a Good article, an article that meets a core set of high editorial standards.

Calgary International Airport (IATA: YYC, ICAO: CYYC), branded as YYC Calgary International Airport, is an international airport that serves the city of Calgary, Alberta, Canada. It is located approximately 17 km (11 mi) northeast of downtown and covers an area of 20.82 km2 (8.04 sq mi) or 5,144 acres. With 17.96 million passengers and 238,843 aircraft movements in 2019, Calgary International is the busiest airport in Alberta and the fourth-busiest in Canada by both measures. This airport is served by the Calgary International Airport Emergency Response Service for aircraft rescue and firefighting (ARFF) protection. The region's petroleum and tourism industries (and its proximity to Banff National Park) have helped foster growth at the airport, which has nonstop flights to an array of destinations in North and Central America, Europe, and Asia. Calgary serves as the headquarters for WestJet and is a hub for Air Canada.

Built in the late 1930s, the site has since grown to house four runways, two terminal buildings with five concourses for passengers, warehouses for cargo handling, and other infrastructure. The Calgary Airport Authority operates the property while paying rent to the federal government. Close to the airport is the Deerfoot Trail freeway for transport into the city, and public transit also serves the airport. (Full article...)

Los Angeles is the second-largest city in the United States, with an estimated population of 3.85 million people. Los Angeles is one of the cultural, economic, scientific and entertainment centers of the country.