Wikipedia portal for content related to the Caribbean
The CARIBBEAN PORTAL

A mostly tropical geography, the climates are greatly shaped by sea temperatures and precipitation, with the hurricane season regularly leading to natural disasters. Because of its tropical climate and low-lying island geography, the Caribbean is vulnerable to a number of climate change effects, including increased storm intensity, saltwater intrusion, sea level rise and coastal erosion, and precipitation variability. These weather changes will greatly change the economies of the islands, and especially the major industries of agricultural and tourism.

The Caribbean was occupied by indigenous people since at least 6000 BC. When European settlement followed the arrival of Columbus in Hispaniola, the Spanish established the first permanent colony in the region, and the native population was quickly decimated by brutal labour practices, enslavement and disease. Europeans supplanted the natives with enslaved Africans in most islands. Following the independence of Haiti from France in the early 19th century and the decline of slavery in the 19th century, island nations in the Caribbean gradually gained independence, with a wave of new states during the 1950s and 60s. Because of the proximity to the United States, there is also a long history of United States intervention in the region. (Full article...)

Refresh with new selections below (purge)

This is a Good article, an article that meets a core set of high editorial standards.

The Ejército Popular Boricua ("Boricua Popular/People's Army"), also known as Los Macheteros ("The Machete Wielders"), is a clandestine organization based in Puerto Rico, with cells in the states and other nations. It campaigns for, and supports, the independence of Puerto Rico from the United States.

During their first decade of existence, they had an average of two actions per year. The group claimed responsibility for the 1978 bombing of a small power station in the San Juan area, the 1979 retaliation attacks against the United States armed forces personnel, the 1981 Muñiz Air National Guard Base attack, and a 1983 Wells Fargo bank robbery. (Full article...)

listen); French: Sainte-Lucie) is an island country in the West Indies in the eastern Caribbean Sea on the boundary with the Atlantic Ocean. The island was previously called Iyonola, the name given to the island by the native Arawaks, and later Hewanorra, the name given by the native Caribs, two separate Amerindian peoples. Part of the Windward Islands of the Lesser Antilles, it is located north/northeast of the island of Saint Vincent, northwest of Barbados and south of Martinique. It covers a land area of 617 km2 (238 square miles) and reported a population of 165,595 in the 2010 census. Its capital is Castries. Soufrière was colonized by the French and was the original capital of the island.

The French were the first Europeans to settle on the island. They signed a treaty with the native Island Caribs in 1660. England took control of the island from 1663 to 1667. In ensuing years, it was at war with France fourteen times, and the rule of the island changed frequently. (It was ruled seven times each by the French and British.) In 1814, the British took definitive control of the island. Because it switched so often between British and French control, Saint Lucia was also known as the "Helen of the West" after the Greek mythological character, Helen of Troy. (Full article...)

Selected fare or cuisine - show another 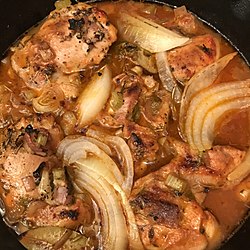 Poul an sòs (chicken in sauce)

Haitian cuisine consists of cooking traditions and practices from Haiti. It is a Creole cuisine, that originates from a blend of several culinary styles that populated the western portion of the island of Hispaniola, namely the African, French, indigenous Taíno, Spanish and Arab influence. Haitian cuisine is comparable to that of "criollo" (Spanish for 'creole') cooking and similar to the rest of the Latin Caribbean, but differs in several ways from its regional counterparts.

The flavors are of a bold and spicy nature that demonstrate African and French influences, with notable derivatives coming from native Taíno and Spanish techniques. (Full article...)

Did you know? - show another

Adult in the Dominican Republic

The golden swallow (Tachycineta euchrysea) is a swallow endemic to the Caribbean island of Hispaniola (split between the Dominican Republic and Haiti) and was once native to Jamaica, but is now extirpated there. It is restricted to isolated montane forests that primarily consist of the Hispaniolan pine (Pinus occidentalis). This species is considered to be a vulnerable species by the International Union for Conservation of Nature (IUCN). The exact cause of its extirpation from Jamaica is unknown, but likely factors include predation by introduced mammals and habitat loss, although the habitat loss theory is not supported by much evidence. The last sighting of the nominate subspecies was in Hardwar Gap (located on the boundary between Saint Andrew and Portland parishes), with three birds being seen on 8 June 1989.

A relatively small swallow, the Jamaican subspecies had bronze upperparts and bronze sides of the head. The ears and lores were duller and the forehead area was more green than bronze. The shoulders, back, rump, and uppertail-coverts were, on the other hand, a coppery-bronze colour. The lesser and median coverts were more coppery, with the greater and primary-wing-coverts being more of a dusky green. The primaries, secondaries, and tail were a dusky bronze-green. The underparts are mostly white. The legs, feet, and irides are dark brown, and the bill was black. The female is similar, but with its breast, and occasionally throat and undertail-coverts, being mottled grey-brown. The juvenile is also mottled-grey brown, in addition to it being duller overall. The Hispaniolan subspecies, T. e. sclateri, is primarily differentiated by its more deeply forked tail, blue-green forehead and uppertail-coverts, and blue-black wings and tail. (Full article...)

Ska (/skɑː/; Jamaican: [skjæ]) is a music genre that originated in Jamaica in the late 1950s and was the precursor to rocksteady and reggae. It combined elements of Caribbean mento and calypso with American jazz and rhythm and blues. Ska is characterized by a walking bass line accented with rhythms on the off beat. It was developed in Jamaica in the 1960s when Stranger Cole, Prince Buster, Clement "Coxsone" Dodd, and Duke Reid formed sound systems to play American rhythm and blues and then began recording their own songs. In the early 1960s, ska was the dominant music genre of Jamaica and was popular with British mods and with many skinheads.

Music historians typically divide the history of ska into three periods: the original Jamaican scene of the 1960s; the 2 Tone ska revival of the late 1970s in Britain, which fused Jamaican ska rhythms and melodies with the faster tempos and harder edge of punk rock forming ska-punk; and third wave ska, which involved bands from a wide range of countries around the world, in the late 1980s and 1990s. (Full article...)

The following are images from various Caribbean-related articles on Wikipedia.

This list was generated from these rules. Questions and feedback are always welcome! The search is being run daily with the most recent ~14 days of results. Note: Some articles may not be relevant to this project.

Note: The list display can now be customized by each user. See List display personalization for details.