Not to be confused with Alaska pollock or Norway pollock.
For the painter, see Jackson Pollock. For other uses, see Pollock (disambiguation).
North Atlantic marine fish in the genus Pollachius

Pollock or pollack[1] (pronounced /ˈpɒlək/) is the common name used for either of the two species of North Atlantic marine fish in the genus Pollachius. Pollachius pollachius is referred to as pollock in both North America and the United Kingdom, while Pollachius virens is usually known as coley in the British Isles (derived from the older name coalfish). Other names for P. pollachius include the Atlantic pollock, European pollock, lieu jaune, and lythe; while P. virens is also known as Boston blue (distinct from bluefish), silver bill, or saithe.

The recognized species in this genus are:[2]

Both species can grow to 105 centimetres (3 feet 5 1⁄2 inches) and can weigh up to 21 kilograms (46 pounds). P. virens has a strongly defined, silvery lateral line running down the sides. Above the lateral line, the colour is a greenish black. The belly is white, while P. pollachius has a distinctly crooked lateral line, grayish to golden belly, and a dark brown back. P. pollachius also has a strong underbite. It can be found in water up to 180 metres (600 feet; 100 fathoms) deep over rocks and anywhere in the water column. Pollock is a whitefish. 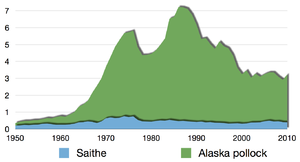 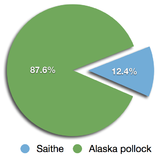 Atlantic pollock is largely considered to be a whitefish, although it is a fairly strongly flavoured one.[citation needed] Traditionally a popular source of food in some countries, such as Norway, in the United Kingdom it has previously been largely consumed as a cheaper and versatile alternative to cod and haddock. However, in recent years,[when?] pollock has become more popular due to overfishing of cod and haddock. It can now be found in most supermarkets as fresh fillets or prepared freezer items. For example, it is used minced in fish fingers or as an ingredient in imitation crab meat and is commonly used to make fish and chips.

Because of its slightly grey colour, pollock is often prepared, as in Norway, as fried fish balls, or if juvenile-sized, breaded with oatmeal and fried, as in Shetland. Year-old fish are traditionally split, salted, and dried over a peat hearth in Orkney, where their texture becomes wooden.[clarification needed] The fish can also be salted and smoked and achieve a salmon-like orange color (although it is not closely related to the salmon), as is the case in Germany, where the fish is commonly sold as Seelachs or sea salmon. In Korea, pollock may be repeatedly frozen and defrosted to create hwangtae, half-dried to create ko-da-ri, or fully dried and eaten as book-o. In 2019, South Korea imposed a total ban on pollock fishing "to help replenish depleted stocks" of the fish.[4]

In 2009, UK supermarket Sainsbury's briefly renamed pollock colin in a bid to boost ecofriendly sales of the fish as an alternative to cod.[5] Sainsbury's, which said the new name was derived from the French for cooked pollock (colin), launched the product under the banner "Colin and chips can save British cod."

One member of the genus Gadus is also commonly referred to as pollock: the Alaska pollock or walleye pollock (Gadus chalcogrammus), including the form known as the Norway pollock. They are also members of the family Gadidae but not members of the genus Pollachius.