Peasant foods are dishes specific to a particular culture, made from accessible and inexpensive ingredients, and usually prepared and seasoned to make them more palatable. They often form a significant part of the diets of people who live in poverty, or have a lower income compared to the average for their society or country.

Peasant foods have been described as being the diet of peasants, that is, tenant or poorer farmers and their farm workers,[1] and by extension, of other cash-poor people. They may use ingredients, such as offal and less-tender cuts of meat, which are not as marketable as a cash crop. Characteristic recipes often consist of hearty one-dish meals, in which chunks of meat and various vegetables are eaten in a savory broth, with bread or other staple food. Sausages are also amenable to varied readily available ingredients, and they themselves tend to contain offal and grains.

Peasant foods often involve skilled preparation by knowledgeable cooks using inventiveness and skills passed down from earlier generations. Such dishes are often prized as ethnic foods by other cultures and by descendants of the native culture who still desire these traditional dishes.[citation needed] 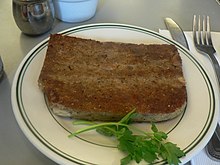 Ground meat or meat scraps mixed with grain in approximately equal proportions, then often formed into a loaf, sliced, and fried

Ground meat or meat scraps extended with crackers or bread and vegetables, then formed into balls, patties, or loaves and baked. 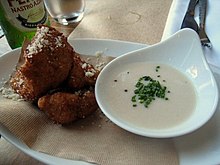 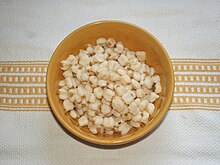 Bowl of hominy, a form of treated corn

Pot-au-feu, the basic French stew, a dish popular with both the poor and the rich alike