"PBH" redirects here. For the RTÉ journalist and presenter, see Philip Boucher-Hayes.
Not to be confused with Faro Airport.

Paro International Airport (Dzongkha: སྤ་རོ་གནམ་ཐང༌ paro gnam thang) (IATA: PBH, ICAO: VQPR) is the sole international airport of the four airports in Bhutan. It is 6 km (3.7 mi; 3.2 nmi) from Paro in a deep valley on the bank of the river Paro Chhu. With surrounding peaks as high as 5,500 m (18,000 ft), it is considered one of the world's most challenging airports,[2] and less than two dozen pilots are certified to land at the airport.[3][4]

Flights to and from Paro are allowed under visual meteorological conditions only and are restricted to daylight hours from sunrise to sunset.[5] Paro airport was the only airport in Bhutan until 2011.[6] Paro Airport is accessible by road, 6 km (3.7 mi; 3.2 nmi) from Paro city, and 54 km (34 mi; 29 nmi) from Thimphu by Paro-Thimphu road. 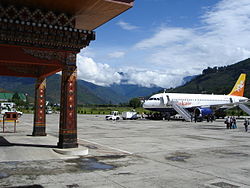 In 1968, the Indian Border Roads Organisation built an airstrip in the Paro valley, which was initially used for on-call helicopter operations by the Indian Armed Forces on behalf of the Royal Government of Bhutan. Bhutan's first airline, Drukair, was established by Royal Charter on 5 April 1981.

Paro Airport is deep in a valley 2,235 m (7,332 ft) above mean sea level and is surrounded by mountains as high as 5,500 m (18,000 ft).[7] The airport was constructed with a runway 1,200 m (3,900 ft) in length,[8] giving the Bhutanese government specific requirements for a choice of aircraft to be operated from Paro. They required an 18–20 seat STOL-capable aircraft with operating capabilities which included a high service ceiling, high rate of climb and high manoeuvrability. The major requirement for the aircraft was that it must be capable of flying Kolkata – Paro – Kolkata, a 1,200 km (750 mi; 650 nmi) round-trip, without refuelling, due to minimal infrastructure being available at Paro. Three aircraft types were considered after flight tests that had been conducted in India and Bhutan between 1978 and 1980; however, none was deemed suitable.[8]

In mid-1981, the Indian government set up a committee to study its own requirements for a light transport aircraft. Based upon this study, the Bhutanese government ordered one Dornier 228-200 for delivery in January 1983, with the option for a second aircraft for delivery in late 1983. The first 18-seat Dornier 228-200 landed at Paro Airport on 14 January 1983. The exact time of landing, the number of passengers on board and even the direction the aircraft was parked on the airport apron being predetermined by the high lama of Paro Dzong.[8]

Drukair inaugurated scheduled revenue flights from Paro on 11 February 1983, with Flight 101 departing Paro for Kolkata and returning the next day as Flight 102. At the time of service commencement, Paro Airport consisted of the runway, a two-room air traffic control building (with the ground floor acting as the check-in counter) and a departure lounge on the lawn.[9] Before the establishment of the Department of Civil Aviation in January 1986, Drukair was responsible for the operation and maintenance of the airport's infrastructure.[10]