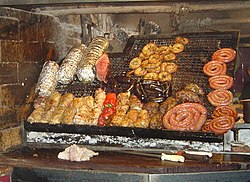 Asado with achuras (offal) and sausages.

The cuisine of Paraguay is the set of dishes and culinary techniques of Paraguay. It has a marked influence of the Guarani people, in fusion with the Spanish cuisine and other marked influences coming from the immigration received by bordering countries such as Italian cuisine and Portuguese food. The gastronomy product of the syncretism and Hispanic-Guaraní fusion, is of greater weight in the Paraguayan history and considered the mother of the whole region, having Asunción as the starting point of many Spanish expeditions in the Southern Cone.[1] It is worth clarifying that in society Paraguayan, the exchange of knowledge occurred between mestizos, criollos and guaraníes, before and even after the Jesuit missions. In 2017, the Ministry of the National Secretariat of Culture of Paraguay decided:

"Declare as 'Intangible Cultural Heritage of Paraguay' the production, handcrafted and traditional production of four typical Paraguayan meals still in force such as vori-vori, locro, Paraguayan soup and jopara (mixed bean and locro) and its recipes, knowledge, practices and knowledge that are passed down from generation to generation and document the material and immaterial elements associated with it (such as corn, in its different varieties) as a cultural manifestation. "[2]

Meat, vegetables, manioc,[3] maize,[3] and fruits are common in Paraguayan cuisine.[4] Barbecuing is both a cooking technique and often a social event, and are known as the Asado. Many dishes are based on corn, milk, cheese and meat, and fish caught in rivers are also eaten.[5] There are about 70 varieties of chipa (cake) in Paraguay. Most chipas are made from manioc flour, which is derived from cassava, and cornmeal. 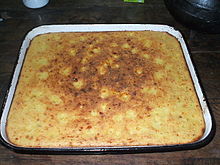 Terere is the national drink of Paraguay.[4] Fruit juices and soft drinks are common. Beer and wine are also available.[4] Caña is an alcoholic beverage made from sugarcane juice, and mosto is a non-alcoholic variety.[4] Cocido is hot tea made out of yerba mate and sugar cooked on a pan with burning coal. The elements are then filtered with hot water and can be taken alone or with milk. The color of cocido is dark brown similar to black coffee and is usually enjoyed with chipa or mbejú.