Map showing North and South Ossetia when they were part of the Soviet Union.

Ossetia (/ɒˈsɛtjə, ɒˈsiːʃə/;[1] Ossetian: Ир, Ирыстон, romanized: Ir, Iryston; Russian: Осетия, romanized: Osetiya; Georgian: ოსეთი, translit. Oseti) is an ethnolinguistic region located on both sides of the Greater Caucasus Mountains, largely inhabited by the Ossetians. The Ossetian language is part of the Eastern Iranian branch of the Indo-European languages family. The Ossetian-speaking area south of the main Caucasus ridge is recognized by most countries as within the borders of Georgia, but under the control of the Russian-backed de facto government of the Republic of South Ossetia. The northern portion of the region consists of the republic of North Ossetia–Alania within the Russian Federation. 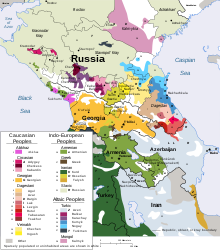 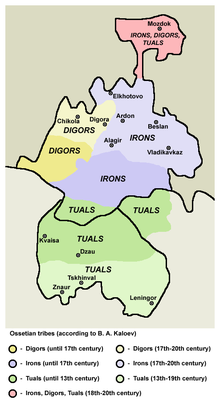 Although a Russian-mediated and Organization for Security and Co-operation in Europe-monitored ceasefire was implemented in South Ossetia in 1992, the Georgian-Ossetian conflict still remains unresolved even though a recent peace plan proposed by the government of Georgia promised the South Ossetians larger autonomy and pledged expanded international involvement in the political settlement of the conflict. Meanwhile, the South Ossetian secessionist authorities demand independence or unification with North Ossetia under the Russian Federation while the international community refuses to recognize South Ossetia as an independent country and considers the area part of Georgia.

On Sunday 12 November 2006, South Ossetians (mostly ethnic Ossetians) went to the polls to vote in a referendum regarding the region's independence from Georgia. The result was a "yes" to independence, with a turnout above 95% from those among the territory's 70,000 people who were eligible to vote at that time.[7] There was also a vote in favour of a new term for South Ossetia's president, Eduard Kokoity.