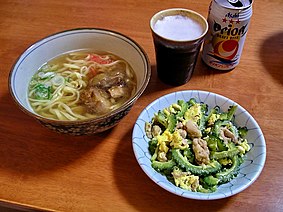 Okinawan cuisine (沖縄料理, Okinawa ryōri) is the cuisine of the Okinawa Prefecture of Japan. The cuisine is also known as Ryūkyūan cuisine (琉球料理, Ryūkyū ryōri), a reference to the Ryukyu Kingdom.[1] Due to differences in culture, historical contact between other regions, climate, vegetables and other ingredients, Okinawan cuisine differs from mainland Japanese cuisine.

Okinawan cuisine incorporates influences from Chinese cuisine and Southeast Asian cuisine due to its long history of trade. The sweet potato, introduced in Okinawa in 1605, became a staple food in Okinawa from then until the beginning of the 20th century. An article about Okinawan food written by Kikkoman states that Goya (bitter melon) and Nabera (luffa or towel gourd) were "likely" introduced to Okinawa from Southeast Asia. Since Ryukyu had served as a tributary state to China, Ryukyuan cooks traveled to Fujian Province to learn how to cook Chinese food; Chinese influence seeped into Okinawa in that manner. The same Kikkoman article states that the method of distillation of awamori likely originated from Siam (Thailand) and traveled to Okinawa during the 15th century. After the lord of the Kagoshima Domain invaded the Ryukyus, Okinawan cooks traveled to Japan to study Japanese cuisine, causing that influence to seep into Okinawan cuisine.[2]

Okinawa was administered by the United States after World War II, during which time various canned foods were popularized. American hamburger shops entered into the Okinawa market earlier than on the mainland. It was during this period that Okinawans became familiar with Americanized food culture. The cuisine has evolved in modern times, especially because of the American military presence on Okinawa since the end of World War II.[1]

Besides vegetables and fruits, the influences of southern and southeastern Asia are evident in Okinawan cuisine in its use of herbs and spices, such as turmeric, used in Okinawa more often than in mainland Japan, but less frequently than other tropical island cuisines.[3] Okinawan cuisine's condiments consist mainly of salt, miso, bonito flakes (katsuobushi) or kombu. Compared to mainland diets, Okinawan dishes do not use as many kinds of mushroom.[citation needed]

Another characteristic of Okinawan cuisine is its reliance on meat. The main protein sources of Okinawan cuisine are derived from livestock, specifically pigs. Buddhism spread less widely in Okinawa, and the islands were less influenced by the non-meat eating practices of the Tokugawa shogunate. Okinawan has had a culture of using livestock since the Edo period. An Okinawan saying states that Okinawan cuisine "begins with pig and ends with pig" and "every part of a pig can be eaten except its hooves and its oink."[2]

Despite being surrounded by the sea, Okinawans eat relatively little seafood compared to other maritime cultures. Fish and other seafood products were traditionally difficult to preserve in the high temperatures of the Okinawan islands. Additionally, the islands are surrounded by relatively few fish species. The primary preparations of fish are pickling in salt (shio-zuke), dried, grilled, simmered in soy sauce (nitsuke), and as kamaboko, a processed seafood product typically made from white fish. Sashimi is served in Okinawa, but is limited by the inability to retain freshness due to high temperatures on the islands. Sashimi, unlike on the main islands of Japan, is not part of a full course meal.[1]

Edible kelp varieties are also popular ingredients, such as kombu. Okinawans make salad, soup, or tempura using Cladosiphon okamuranus(モズク), Hijiki and so on. Okinawan cuisine frequently uses kombu, not only in making soup stock, but also in preparing braised dishes, stir fried dishes and so on. Although it is not cultivated in the region, Okinawa is one of the largest consumers of kombu in Japan.[citation needed]

Okinawan staple foods are traditionally potatoes, such as sweet potato or taro root, but they are substituted to rice or wheat flour, then Okinawans developed original dishes such as taco rice, etc.

After the end of the occupation, they still have original food cultures, and Americanized foods are frequently eaten in their diets. But, Okinawan people do not consume dairy foods so much, such as milk and cheese. Bread is not so popular as a staple food.

Okinawans are known for their longevity; five times as many Okinawans live to be 100 than the rest of Japan, and the Japanese themselves are the longest lived nationality in the world.[5][page needed]