For the species of snake mackerel, see Oilfish.

Most small forage fish, like these schooling anchovies, are also oily fish.

Oily fish have oil in their tissues and in the belly cavity around the gut. Their fillets contain up to 30% oil, although this figure varies both within and between species. Examples include small forage fish, such as sardines, herring and anchovies, and other larger pelagic fish, such as salmon, trout, tuna, swordfish and mackerel.[1]

Oily fish can be contrasted with white fish, which contain oil only in the liver, and much less overall than oily fish. Examples of white fish are cod, haddock and flatfish. White fish are usually demersal fish which live on or near the seafloor, whereas oily fish are pelagic, living in the water column away from the bottom.

Oily fish meat is a good source of vitamins A and D, and is rich in omega-3 fatty acids (white fish also contain these nutrients but at a much lower concentration). For this reason the consumption of oily fish rather than white fish can be more beneficial to humans, particularly concerning cardiovascular diseases;[2] however, oily fish are known to carry higher levels of contaminants (such as mercury or dioxin or POPs) than whitefish.[citation needed] Among other benefits, studies suggest that the omega-3 fatty acids in oily fish may help improve inflammatory conditions such as arthritis.[3] 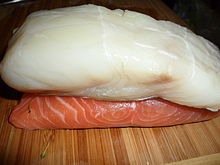 A 1997 study published in Annals of Neurology followed 5,386 elderly participants in Rotterdam. It found that fish consumption decreased the risk of dementia.[4] However, the 2.1-year average follow-up was less than the three years dementia commonly affects people prior to diagnosis. Thus, the study was unclear as to whether fish consumption protected against dementia, or if dementia prevented the participants from wanting more fish.[5]

French research published in 2002 in the British Medical Journal (BMJ) followed 1,674 elderly residents of southern France for seven years, studying their consumption of meat versus seafood and the presence of dementia symptoms. The conclusion was that people who ate fish at least once a week had a significantly lower risk of being diagnosed with dementia over a seven-year period. This study reinforced the Annals of Neurology findings. Because of the longer term, the BMJ study provided stronger evidence of a genuine protective effect.[5] There was a possible confounding factor in that individuals with higher education have both a lower risk of dementia and higher consumption of fish.[6]

Consuming 200–400 g of oily fish twice per week may also help prevent sudden death due to myocardial infarction by preventing cardiac arrhythmia.[7] The eicosapentaenoic acid found in fish oils appears to dramatically reduce inflammation through conversion within the body to resolvins, with beneficial effects for the cardiovascular system and arthritis.[8] 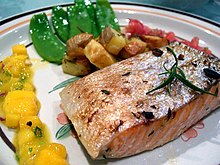 In 1994, the UK Committee on Medical Aspects of Food and Nutrition Policy recommended that people eat at least two portions of fish per week, one of which should be oily fish.

In 2004 the UK Food Standards Agency published advice on the recommended minimum and maximum quantities of oily fish to be eaten per week, to balance the beneficial qualities of the omega-3 fatty acids against the potential dangers of ingesting polychlorinated biphenyls and dioxins. It reiterated the 1994 guideline of two portions of fish per week including one portion of oily fish, but advised eating no more than four portions per week, and no more than two portions for people who are pregnant, may become pregnant or who are breastfeeding.[9]

The United States Environmental Protection Agency's (EPA) Exposure Reference Dose (RfI) for methylmercury (MeHg) is 0.1 micrograms per kg body weight per day. The corresponding limit of blood mercury is 5.8 micrograms per liter. The restrictions apply to certain oily fish – "marlin, swordfish, shark and, to a lesser extent, tuna"[10] The recommendations on maximum consumption of oily fish were up to four portions (1 portion = 140g, or approx 4.9 ounces) a week for men, boys, and women past childbearing age, and up to two portions a week for women of childbearing age, including pregnant and breastfeeding women, and girls. There is no recommended limit on the consumption of white fish.

The EPA and 2007 U.S. Department of Agriculture guidelines sets a limit only on consumption of fatty fish with greater than one part per million of methylmercury, specifically tilefish, king mackerel, shark and swordfish[citation needed]. There are limits, however, for nursing/pregnant women and children under the age of six. This population should completely avoid fish with high risk of mercury contamination (those listed above) and limit consumption of moderate and low-mercury fish to 12 ounces or less per week[citation needed]. Albacore tuna should be limited to six ounces or less per week[citation needed].

Concerns about contamination, diet or supply have led to investigation of plant sources of omega-3 fatty acids, notably flax, hempseed and perilla oils. Lactating women who supplemented their diet with flaxseed oil showed increases in blood and breastmilk concentration of alpha-linolenic acid and eicosapentaenoic acid but no changes to concentrations of docosahexaenoic acid.[11]