Northern Irish cuisine encompasses the cooking styles, traditions and recipes associated with Northern Ireland. It has distinctive attributes of its own, but has also drawn heavily from British cuisine and that of the Republic of Ireland.

Northern Ireland’s culinary heritage has its roots in the staple diet of generations of farming families; bread and potatoes.[1] Historically, limited availability of ingredients and low levels of immigration resulted in restricted variety and relative isolation from wider international culinary influences. Recent decades, however, have seen significant developments in the local cuisine, characterised by an increase in the variety, quantity and quality of gastropubs and restaurants. There are currently two Michelin star restaurants in Northern Ireland, both of which specialise in traditional dishes made using local ingredients.[2] Northern Irish cuisine received international attention in March 2018 when it was reported that Prince Harry and Meghan Markle had Irish stew and sausage with champ for lunch at the Crown Liquor Saloon, during a tour of Belfast.[3]

Ardglass potted herring is found in butcher's shops and fish traders. It is herring that is marinated in vinegar, rolled with bay leaf and baked with breadcrumbs.

Potato bread a flat bread prepared with potato, flour, and buttermilk.[4] It is cooked on a griddle.[4]

Soda bread is one of Northern Ireland’s griddle breads, it can be eaten straightaway, or cooked until golden in an Ulster fry. They are sometimes eaten with butter and homemade jam, or with savoury food such as smoked salmon, fresh fried eel, or thick dry-cured bacon.

Soda bread is a soft, thick and fluffy bread. It was first baked in the 1800s in Ireland, and local people used baking soda to cause the dough to rise. It's typically served with an Ulster fry.[4]

Wheaten bread is a brown bread made with whole wheat flour which also uses baking soda as a rising agent. It is often sweetened in contrast to the savoury white soda bread.[4]

A soft tray bake cake which gets its name from using Fifteen of each main ingredient (marshmallows, digestive biscuits, cherries).

Boxty is mainly found in County Fermanagh, Boxty is a weighty, starchy potato cake made with 50:50 mix of cooked mashed potatoes and grated, strained, raw potato. The most common variety is boiled boxty, also known as hurley, a large round loaf which is boiled whole for several hours, allowed to rest and then sliced and fried, often with bacon.

Champ is made with potatoes when they are mashed with milk and chopped spring onions are added.[4]

There is a particular vegetable soup made throughout Ulster from carrots, celery, thin leeks and parsley, thickened with red lentils and barley. Packets of these six ingredients are often sold together as 'soup veg'.[4]

Dulse is a seaweed snack food. Originally, it was harvested by fishermen for income supplementation when fishing was meager.[4]

Pasties are made from a mixture of sausage meat, onions, and mashed potato, shaped like a burger and spiced with black pepper. They can be ordered battered from most chip shops. 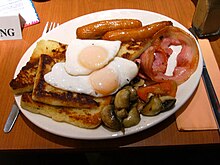 The best known traditional dish in Northern Ireland is the Ulster fry. An Ulster fry, although not originally particularly associated with breakfast time, has in recent decades been marketed as Northern Ireland's version of a cooked breakfast. It is distinguishable from a full breakfast by its griddle breads – soda bread and potato bread, fried (or occasionally grilled) until crisp and golden. Sometimes also including small pancakes. Bacon, sausages, an egg, and (as a modern development) tomato and sometimes mushrooms complete the dish It is usually served with tea and toast.

At breakfast people of Northern Ireland are also partial to porridge, made with rolled oats, milk or water and a pinch of salt or sugar. For extra luxury, in the weekend, it can be dressed with cream rather than milk, and brown sugar. Some even add a dash of whiskey.

Yellowman is a crunchy golden confectionery and looks a bit like honeycomb. It is mainly sold at fairs and markets.