The word noon means 'salt' in several Indian languages such as Kashmiri, Bengali, Rajasthani, Hindi and Nepali.[3] It is used in several other terms, such as the noon-dab ("salt promise") custom of Rajasthan, where a hand is dipped in salt to signify a solemn promise.[4] 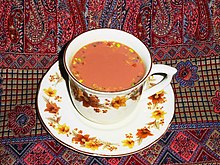 Noon chai is traditionally made from a type of green tea leaves, milk, salt, baking soda and usually cooked in a samavar.[5] A pinch of baking soda gives it a pronounced pink color. Sugar is not traditionally used in Kashmiri home recipes, although newer commercial preparations in Indian and Pakistani restaurants and tea stalls may include sweetener.

Noon chai is served in many states of India usually in Northern India (Jammu and Kashmir, Himachal Pradesh) and areas with even small Tibetan population such as Mainpat, Chhattisgarh. In Pakistan, it is often served with sugar and nuts (for non-Kashmiris who are not acquainted with salty tea),[5] at special occasions, weddings, and during the winter months. Noon chai is an essential part of Kashmiri breakfast and supper, It is consumed with various types of traditional bread made in Kashmir. Kashmiri chai or Kashmiri tea is pink, milky and creamy and is usually garnished with a sprinkling of chopped almonds and pistachios.

6. Life of a Notable Kashmiri by Abid Bashir