Montenegrin cuisine is a result of Montenegro's geographic position and its long history and tradition. 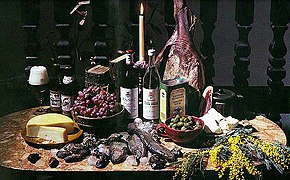 The first large influence came from the Levant and Turkey, largely via Serbia: sarma, musaka, pilav, pita, gibanica, burek, ćevapi, kebab, đuveč, and Turkish sweets such as baklava and tulumba.

Central European cuisine is evident in the prevalence of crêpes, doughnuts, jams, many types of biscuits and cakes, and various kinds of breads.

Montenegrin cuisine also varies geographically; the cuisine in the coastal area differs from that of the northern highland region. The coastal area is traditionally a representative of Mediterranean cuisine, with seafood being a common dish. The traditional dishes of Montenegro's Adriatic coast, unlike its heartland, have a distinctively Italian influence as well.[1]

Homemade-style bread prepared in Montenegro is closest to what is known in Italy as pane casareccio. It is served with every meal. Includes; Ječmeni (barley bread), Ražani (rye bread), Pšenični (wheat bread), Rumetinov (corn bread)

Traditionally, after the broth is made, a handful of rice is added to the pot to make the soup more substantial. Nowadays, pasta took over as the preferred addition.

The most common salads served in Montenegrin homes:

A piece of seasonal fruit is the most common way to end the meal. The proper sweets are usually served on their own, around tea-time or at any time coffee is served.

Affordable fast food and includes; Ćevapi, Pljeskavica (served in a local form of hamburger) and Ražnjići

The most common non-alcoholic drink in Montenegrin homes is the famed pomegranate syrup. Turkish coffee is also almost unavoidable in any but the most brief meeting or a visit.

Beer is brewed in the Trebjesa brewery. Wine is also made in the country, see Montenegrin wine Vranac. Rakia and pelinkovac are traditional distilled drinks from the Balkan.