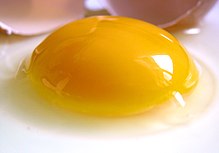 Molecular gastronomy includes the study of how different cooking temperatures affect eggs,[1][2] their viscosity, surface tension, and different ways of introducing air into them.[3]

Spherification of juices and other liquids is a technique of molecular gastronomy.

A molecular gastronomy rendition of eggs Benedict served by wd~50 in New York City. The cubes are deep-fried Hollandaise sauce.

Molecular gastronomy is a subdiscipline of food science that seeks to investigate the physical and chemical transformations of ingredients that occur in cooking. Its program includes three areas, as cooking was recognized to have three components: social, artistic, and technical.[4] Molecular cuisine is a modern style of cooking, and takes advantage of many technical innovations from the scientific disciplines.

The term "Molecular and Physical Gastronomy" was coined in 1988 by late Oxford physicist Nicholas Kurti and the French INRA chemist Hervé This.[5] Some chefs associated with the term choose to reject its use.[6] 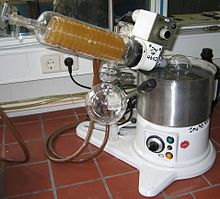 Rotary evaporator used in the preparation of distillates and extracts 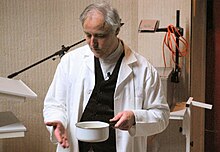 French chemist and cook Hervé This, known as "The Father of Molecular Gastronomy"[8]

There are many branches of food science that study different aspects of food, such as safety, microbiology, preservation, chemistry, engineering and physics. Until the advent of molecular gastronomy, there was no branch dedicated to studying the chemical processes of cooking in the home and in restaurants. Food science has primarily been concerned with industrial food production and, while the disciplines may overlap, they are considered separate areas of investigation.

The creation of the discipline of molecular gastronomy was intended to bring together what had previously been fragmented and isolated investigations into the chemical and physical processes of cooking into an organized discipline within food science, to address what the other disciplines within food science either do not cover, or cover in a manner intended for scientists rather than cooks.

The term "molecular and physical gastronomy" was coined in 1988 by Hungarian physicist Nicholas Kurti and French physical chemist Hervé This. In 1992, it became the title for a set of workshops held in Erice, Italy (originally titled "Science and Gastronomy")[5] that brought together scientists and professional cooks for discussions about the science behind traditional cooking preparations. Eventually, the shortened term "molecular gastronomy" became the name of the approach, based on exploring the science behind traditional cooking methods.[5][10][11]

Kurti and This considered the creation of a formal discipline around the subjects discussed in the meetings.[11] After Kurti's death in 1998, the name of the Erice workshops were changed by This to "The International Workshop on Molecular Gastronomy 'N. Kurti'". This remained the sole director of the subsequent workshops from 1999, and continued his research in the field of molecular gastronomy at the Inra-AgroParisTech International Centre for Molecular Gastronomy, remaining in charge of organizing the international meetings.[12]

The idea of using techniques developed in chemistry to study food is not a new one, for instance the discipline of food science has existed for many years. Kurti and This acknowledged this fact and though they decided that a new, organized and specific discipline should be created within food science that investigated the processes in regular cooking (as food science was primarily concerned with the nutritional properties of food and developing methods to process food on an industrial scale), there are several notable examples throughout history of investigations into the science of everyday cooking recorded as far as back to 18th century.[4][13] 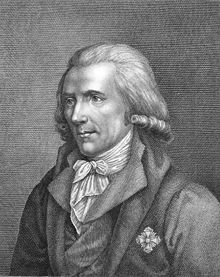 The concept of molecular gastronomy was perhaps presaged by Marie-Antoine Carême, one of the most famous French chefs, who said in the early 19th century that when making a food stock "the broth must come to a boil very slowly, otherwise the albumin coagulates, hardens; the water, not having time to penetrate the meat, prevents the gelatinous part of the osmazome from detaching itself."

In 1943 the University of Chicago Press published a book titled Food Chemistry and Cookery by the then University of Chicago Associate Professor of Home Economics Evelyn G. Halliday and University of Minnesota Associate Professor of Home Economics Isabel T. Noble. In the foreword of the 346-page book, the authors state that, "The main purpose of this book is to give an understanding of the chemical principles upon which good practices in food preparation and preservation are based." [14]

The book includes chapters such as "The Chemistry of Milk", "The Chemistry of Baking Powders and Their Use in Baking", "The Chemistry of Vegetable Cookery" and "Determination of Hydrogen Ion Concentration" and contains numerous illustrations of lab experiments including a Distillation Apparatus for Vegetable Samples and a Pipette for Determining the Relative Viscosity of Pectin Solutions.[14] The professors had previously published The Hows and Whys of Cooking in 1928.[15]

In 1932, Belle Lowe, then the professor of Food and Nutrition at Iowa State College, published a book titled Experimental Cookery: From The Chemical And Physical Standpoint which became a standard textbook for home economics courses across the United States. The book is an exhaustively researched look into the science of everyday cooking referencing hundreds of sources and including many experiments. At a length of over 600 pages with section titles such as "The Relation Of Cookery To Colloidal Chemistry", "Coagulation Of Proteins", "The Factors Affecting The Viscosity Of Cream And Ice Cream", "Syneresis", "Hydrolysis Of Collagen" and "Changes In Cooked Meat And The Cooking Of Meat", the volume rivals or exceeds the scope of many other books on the subject, at a much earlier date.[16][17]

Though rarely credited, the origins of the Erice workshops (originally entitled "Science and Gastronomy") can be traced back to cooking teacher Elizabeth Cawdry Thomas, who studied at Le Cordon Bleu in London and ran a cooking school in Berkeley, California. The one-time wife of a physicist, Thomas had many friends in the scientific community and an interest in the science of cooking. In 1988, while attending a meeting at the Ettore Majorana Center for Scientific Culture in Erice, Thomas had a conversation with Professor Ugo Valdrè of the University of Bologna, who agreed with her that the science of cooking was an undervalued subject, and encouraged Kurti to organize a workshop at the Ettore Majorana Center. However nothing happened until Kurti met Hervé This: both approached the director of the Ettore Majorana center, physicist Antonino Zichichi who liked the idea. They invited the food science writer Harold McGee to join them as invited co-director of the first workshops in 1992.[5]

University of Oxford physicist Nicholas Kurti advocated applying scientific knowledge to culinary problems. He was one of the first television cooks in the UK, hosting a black-and-white television show in 1969 entitled The Physicist in the Kitchen, where he demonstrated techniques such as using a syringe to inject hot mince pies with brandy in order to avoid disturbing the crust.[18] That same year, he held a presentation for the Royal Society of London (also entitled "The Physicist in the Kitchen") in which he stated:[19]

I think it is a sad reflection on our civilization that while we can and do measure the temperature in the atmosphere of Venus we do not know what goes on inside our soufflés.

Kurti demonstrated making meringue in a vacuum chamber, the cooking of sausages by connecting them across a car battery, the digestion of protein by fresh pineapple juice, and a reverse baked alaska—hot inside, cold outside—cooked in a microwave oven.[19][20] Kurti was also an advocate of low temperature cooking, repeating 18th century experiments by British scientist Benjamin Thompson by leaving a 2 kg (4.4 lb) lamb joint in an oven at 80 °C (176 °F). After 8.5 hours, both the inside and outside temperature of the lamb joint were around 75 °C (167 °F), and the meat was tender and juicy.[19]

With his wife, Giana Kurti, Nicholas Kurti edited an anthology on food and science by fellows and foreign members of the Royal Society.

Hervé This started collecting "culinary precisions" (old kitchen wives' tales and cooking tricks) the 24th of March 1980, and started testing these precisions to see which held up; his collection eventually numbered some 25,000. In 1995, he received a PhD in Physical Chemistry of Materials, for which he wrote his thesis on "La gastronomie moléculaire et physique" (molecular and physical gastronomy). He served as an adviser to the French minister of education, lectured internationally, and was invited to join the lab of Nobel-winning molecular chemist Jean-Marie Lehn.[21][22] This has published several books in French, four of which have been translated into English, including Molecular Gastronomy: Exploring the Science of Flavor, Kitchen Mysteries: Revealing the Science of Cooking, Cooking: The Quintessential Art, and Building a Meal: From Molecular Gastronomy to Culinary Constructivism.

The objectives of molecular gastronomy, as defined by Hervé This, are seeking for the mechanisms of culinary transformations and processes (from a chemical and physical point of view) in three areas:[10][26]

The original fundamental objectives of molecular gastronomy were defined by This in his doctoral dissertation as:[26]

Hervé This later recognized points 3, 4, and 5 as being not entirely scientific endeavors (more application of technology and educational), and has revised the list.[4]

Prime topics for study include[27]

Grant Achatz shown plating a dish at Alinea, has been called the leading American chef in molecular gastronomy.[28]

Homaro Cantu of Moto Restaurant was a molecular gastronomer.

In the late 1990s and early 2000s, the term started to be used to describe a new style of cooking in which some chefs began to explore new possibilities in the kitchen by embracing science, research, technological advances in equipment and various natural gums and hydrocolloids produced by the commercial food processing industry.[29][30][31] It has since been used to describe the food and cooking of a number of famous chefs, though many of them do not accept the term as a description of their style of cooking.[6]

Despite their central role in the popularisation of science-based cuisine, both Adria and Blumenthal have expressed their frustration with the common mis-classification of their food and cooking as "molecular gastronomy",[32] On 10 December 2006 Blumenthal and Harold McGee published a 'Statement on the "New Cookery" in the Observer in order to summarise what they saw as the central tenets of modern cuisine. Ferran Adria of El Bulli and Thomas Keller of the French Laundry and Per Se signed up to this and together released a joint statement in 2006 clarifying their approach to cooking,[6] stating that the term "molecular gastronomy" was coined in 1992 for a single workshop that did not influence them, and that the term does not describe any style of cooking.[6]

The term molecular gastronomy was originally intended to refer only to the scientific investigation of cooking,[41] though it has been adopted by a number of people and applied to cooking itself or to describe a style of cuisine. 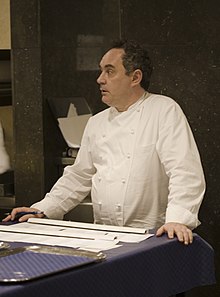 Ferran Adrià of El Bulli, prefers the term 'deconstructivist' to describe his style of cooking.[42]

Other names for the style of cuisine practiced by these chefs include:

No singular name has ever been applied in consensus, and the term "molecular gastronomy" continues to be used often as a blanket term to refer to any and all of these things—particularly in the media. Ferran Adrià hates the term "molecular gastronomy"[42] and prefers 'deconstructivist' to describe his style of cooking.[42] A 2006 open letter by Ferran Adria, Heston Blumenthal, Thomas Keller and Harold McGee published in The Times used no specific term, referring only to "a new approach to cooking" and "our cooking".[52]