The oil industry significantly impacts the entire region, both through the wealth that it generates and through the movement of labor. Most of the countries in the region have undertaken efforts to diversify their economies in recent years, however.

Policies advocating Middle East economic integration aim to bring about peace, stability, and prosperity in the Middle East, which they believe can only be sustained over the long run via regional economic cooperation.[1]

Former U.S. Secretary of State Warren Christopher said that, "Governments can create the climate for economic growth...[but] only the private sector can produce a peace that will endure."[2] 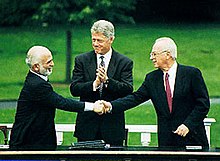 In 1993, Israeli Prime Minister Shimon Peres, a leading architect of the Oslo peace plan, envisioned that:[1]

The next stage, after bilateral and multilateral relationships have been established, will entail formation of regional industries through the cooperation of international bodies and independent international consortiums. At this point, the regional economic process will be upgraded and the new reality, in which business precedes politics, will be instituted. Ultimately, the Middle East will unite in a common market after we achieve peace. And the very existence of this common market will foster vital interests in maintaining peace over the long term.

A prerequisite to economic integration is the establishment of peace. To date, several initiatives have enabled rapprochement among former enemies:

The Oslo Peace Accords and the 1994 Israel–Jordan peace treaty have promulgated greater economic interactions between Israel and its Arab neighbors. Despite this progress, problems like the Israeli–Palestinian conflict continue to be a hindrance to peace and development. Furthermore, the instability created by the war in Afghanistan, civil wars in Syria, Libya, Yemen and Egypt and the 2003 U.S. invasion of Iraq are considered negative factors to be overcome before the establishment of an economic union in this region.

Arabic, Persian, Turkish, Kurdish and Hebrew, are the main languages spoken in the Middle East by over 400 million people; English and French are common supplementary languages.