structure of the brain stem

The medulla oblongata or simply medulla is a long stem-like structure which makes up part of the brainstem. It is anterior and partially inferior to the cerebellum. It is a cone-shaped neuronal mass responsible for autonomic (involuntary) functions ranging from vomiting to sneezing. The medulla contains the cardiac, respiratory, vomiting and vasomotor centers and therefore deals with the autonomic functions of breathing, heart rate and blood pressure as well as the sleep wake cycle.

During embryonic development the medulla oblongata develops from the myelencephalon. The myelencephalon is a secondary vesicle which forms during the maturation of the rhombencephalon, also referred to as the hindbrain. 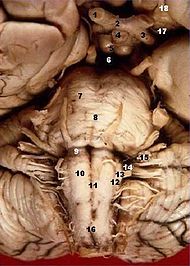 Medulla-animated as it protrudes from the foramen magnum of the skull-base, after which it gives rise to the spinal cord.

The medulla can be thought of as being in two parts:

The anterior median fissure contains a fold of pia mater, and extends along the length of the medulla oblongata. It ends at the lower border of the pons in a small triangular area, termed the foramen cecum. On either side of this fissure are raised areas termed the medullary pyramids. The pyramids house the pyramidal tracts–the corticospinal and the corticobulbar tracts of the nervous system. At the caudal part of the medulla these tracts cross over in the decussation of the pyramids obscuring the fissure at this point. Some other fibers that originate from the anterior median fissure above the decussation of the pyramids and run laterally across the surface of the pons are known as the anterior external arcuate fibers.

The region between the anterolateral and posterolateral sulcus in the upper part of the medulla is marked by a pair of swellings known as olivary bodies (also called olives). They are caused by the largest nuclei of the olivary bodies, the inferior olivary nuclei.

Just above the tubercles, the posterior aspect of the medulla is occupied by a triangular fossa, which forms the lower part of the floor of the fourth ventricle. The fossa is bounded on either side by the inferior cerebellar peduncle, which connects the medulla to the cerebellum.

The lower part of the medulla, immediately lateral to the cuneate fasciculus, is marked by another longitudinal elevation known as the tuberculum cinereum. It is caused by an underlying collection of gray matter known as the spinal trigeminal nucleus. The gray matter of this nucleus is covered by a layer of nerve fibers that form the spinal tract of the trigeminal nerve.

Blood to the medulla is supplied by a number of arteries.

The medulla oblongata forms in fetal development from the myelencephalon. The final differentiation of the medulla is seen at week 20 gestation.[1][full citation needed]

Neuroblasts from the alar plate of the neural tube at this level will produce the sensory nuclei of the medulla. The basal plate neuroblasts will give rise to the motor nuclei.

The medulla oblongata connects the higher levels of the brain to the spinal cord, and is responsible for several functions of the autonomous nervous system which include:

A blood vessel blockage (such as in a stroke) will injure the pyramidal tract, medial lemniscus, and the hypoglossal nucleus. This causes a syndrome called medial medullary syndrome.

Lateral medullary syndrome can be caused by the blockage of either the posterior inferior cerebellar artery or of the vertebral arteries.

Both lampreys and hagfish possess a fully developed medulla oblongata.[3][4] Since these are both very similar to early agnathans, it has been suggested that the medulla evolved in these early fish, approximately 505 million years ago.[5] The status of the medulla as part of the primordial reptilian brain is confirmed by its disproportionate size in modern reptiles such as the crocodile, alligator, and monitor lizard.