Genus of plants in the family Proteaceae indigenous to Australia

Macadamia is a genus of four species of trees indigenous to Australia, and constituting part of the plant family Proteaceae.[1][2] They are native to north eastern New South Wales and central and south eastern Queensland. Three species of the genus are commercially important for their fruit, the macadamia nut /ˌmækəˈdeɪmiə/ (or simply macadamia), with a total global production of 160,000 tonnes (180,000 short tons) in 2015.[3] Other names include Queensland nut, bush nut, maroochi nut, bauple nut, and Hawaii nut.[4] In Australian Aboriginal languages, the fruit is known by names such as bauple, gyndl, jindilli,[4] and boombera. It was an important source of bushfood for the Aboriginal peoples who were the original inhabitants of the area.

Fresh macadamia nut with husk or pericarp cut in half 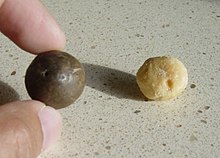 Macadamia nut in its shell and a roasted nut 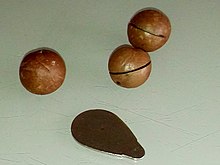 The German-Australian botanist Ferdinand von Mueller gave the genus the name Macadamia in 1857 in honour of the Scottish-Australian chemist, medical teacher, and politician John Macadam.[6]

The leaves are arranged in whorls of three to six, lanceolate to obovate or elliptic in shape, 60–300 mm (2–10 in) long and 30–130 mm (1–5 in) broad, with an entire or spiny-serrated margin. The flowers are produced in a long, slender, simple raceme 50–300 mm (2–10 in) long, the individual flowers 10–15 mm (0.4–0.6 in) long, white to pink or purple, with four tepals. The fruit is a hard, woody, globose follicle with a pointed apex, containing one or two seeds. The nut shell ("coat") is particularly tough, and requires around 2000 N to crack. The shell material is 5 times harder than hazelnut shells, and has mechanical properties similar to aluminium. It has a Vickers hardness of 35.[7][8]

Nuts from M. jansenii contain toxic amounts of cyanogenic glycosides,[citation needed] the other three species are cultivated in the commercial production of macadamia nuts for human consumption.

Virotia L.A.S.Johnson & B.G.Briggs, formerly Macadamia until the first species renaming began in 1975 and comprehensive in 2008 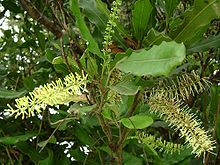 The macadamia tree is usually propagated by grafting, and does not begin to produce commercial quantities of seeds until it is 7–10 years old, but once established, may continue bearing for over 100 years. Macadamias prefer fertile, well-drained soils, a rainfall of 1,000–2,000 mm (40–80 in), and temperatures not falling below 10 °C (50 °F) (although once established, they can withstand light frosts), with an optimum temperature of 25 °C (80 °F). The roots are shallow and trees can be blown down in storms; like most Proteaceae, they are also susceptible to Phytophthora root disease. As of 2019, the macadamia nut is the most expensive nut in the world, which is attributed to the slow harvesting process.[28]

A Macadamia integrifolia / M. tetraphylla hybrid commercial variety is widely planted in Australia and New Zealand; it was discovered by Dr. J. H. Beaumont. It is high in oil, but is not sweet. New leaves are reddish, and flowers are bright pink, borne on long racemes. It is one of the quickest varieties to come into bearing once planted in the garden, usually carrying a useful crop by the fourth year, and improving from then on. It crops prodigiously when well pollinated. The impressive, grape-like clusters are sometimes so heavy, they break the branchlets to which they are attached. In commercial orchards, it has reached 18 kg (40 lb) per tree by eight years old. On the downside, the macadamias do not drop from the tree when ripe, and the leaves are a bit prickly when one reaches into the interior of the tree during harvest. Its shell is easier to open than that of most commercial varieties. 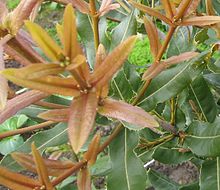 A pure M. tetraphylla variety from Australia, this strain is cultivated for its productive crop yield, flavor, and suitability for pollinating 'Beaumont'.

A South African M. integrifolia / M. tetraphylla hybrid cultivar, it has a sweet seed, which means it has to be cooked carefully so that the sugars do not caramelise. The sweet seed is usually not fully processed, as it generally does not taste as good, but many people enjoy eating it uncooked. It has an open micropyle (hole in the shell) which may let in mould. The crack-out percentage (ratio of nut meat to whole nut, by weight) is high. Ten-year-old trees average 22 kg (50 lb) per tree. It is a popular variety because of its pollination of 'Beaumont', and the yields are almost comparable.

A M. integrifolia / M. tetraphylla hybrid, this is a rather spreading tree. On the plus side, it is high yielding commercially, 17 kg (37 lb) from a 9-year-old tree has been recorded, and the nuts drop to the ground. However, they are thick-shelled, with not much flavor.

The first commercial orchard of macadamia trees was planted in the early 1880s by Rous Mill, 12 km (7.5 mi) southeast of Lismore, New South Wales, consisting of M. tetraphylla.[30] Besides the development of a small boutique industry in Australia during the late 19th and early 20th centuries, macadamia was extensively planted as a commercial crop in Hawaii from the 1920s. Macadamia seeds were first imported into Hawaii in 1882 by William H. Purvis, who planted seeds that year at Kapulena.[31] The Hawaiian-produced macadamia established the well-known seed internationally, and in 2017 Hawaii produced over 22,000 tonnes.[32]

In 2019, researchers collected samples from hundreds of trees in Queensland, and compared the genetic profiles to samples from Hawaiian orchards. They determined that essentially all the Hawaiian trees must have descended from a small population of Australian trees from Gympie, possibly just a single tree.[33] This lack of genetic diversity in the commercial crop puts it at risk of succumbing to pathogens (as has happened in the past to banana cultivars). Growers may seek to diversify the cultivated population, by hybridizing with wild specimens.

The seeds (nuts) are a valuable food crop.

Compared with other common edible nuts, such as almonds and cashews, macadamias are high in total fat and relatively low in protein (table). They have a high amount of monounsaturated fats (59% of total content, table) and contain, as 17% of total fat, the monounsaturated fat, omega-7 palmitoleic acid.[34]

Macadamias are toxic to dogs. Ingestion may result in macadamia toxicity marked by weakness and hind limb paralysis with the inability to stand, occurring within 12 hours of ingestion.[35] Depending on the quantity ingested and size of the dog, symptoms may also include muscle tremors, joint pain, and severe abdominal pain. In high doses of toxin, opiate medication may be required for symptom relief until the toxic effects diminish, with full recovery usually within 24 to 48 hours.[35]

The trees are also grown as ornamental plants in subtropical regions for their glossy foliage and attractive flowers. The flowers produce a well regarded honey. The wood is used decoratively for small items.[36] Macadamia species are used as food plants by the larvae of some Lepidoptera species, including Batrachedra arenosella.

Macadamia seeds are often fed to hyacinth macaws in captivity. These large parrots are one of the few animals, aside from humans, capable of cracking the shell and removing the seed.[37]