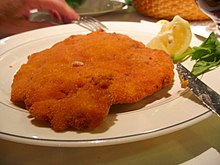 The regional cuisine of Lombardy is heavily based upon ingredients like rice, beef, pork, butter, and lard.[1] Despite being a form of Italian cuisine, Lombard food, like other cuisine of Northern Italy, tends to have little in common with Central or Southern Italian dishes, in many cases lacking the presence of tomato and olive oil, being more meat-based and buttery.[2] In many aspects, Lombard cuisine has much in common with that of Austria and central Europe in general with dishes such as Milanese scallop, Spätzle and Spezzatino also known as Gulasch.

Similarly to Italian cuisine, Lombard cuisine has much variety and every city and part of the region offers its own specialities. A characteristic Lombard dish is risotto, most famously risotto alla milanese (which contains saffron), with rice-based food being highly common throughout the region. Similarly to risotto, maize-based dishes such as polenta are also common parts of the regional cuisine. Famous Lombard dishes include cotoletta, cassoeula and ossobuco. The region also offers several delicacies and desserts, amongst which noted ones such as mostarda and panettone. Regional cheeses include Robiola, Crescenza, Taleggio, Gorgonzola and Grana Padano (the plains of central and southern Lombardy allow intensive cattle-raising). The various Lombard provinces have their own specialties.

The capital of Lombardy is also home to many culinary specialties. One of the best known is risotto alla milanese, flavoured with saffron and typically served with many typical Milanese main courses, such as ossobuco alla milanese (cross-cut veal shanks braised with vegetables, white wine and broth) and cotoletta alla milanese (a fried cutlet similar to Wiener schnitzel, but cooked "bone-in"). Other Milanese specialities include cassoeula (a typical winter dish prepared with cabbage and pork), Rustin Negaa (a roast using veal covered with white wine or "drowned" in wine) and the famous panettone Christmas cake (sweet bread with candied orange, citron, and lemon zest, as well as raisins, which are added dry and not soaked). 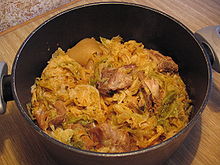 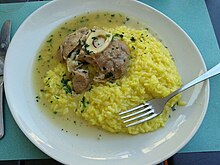 The province of Brescia is the largest and most varied in Lombardy, this obviously also influences the cuisine, ranging from the typical peasant recipes of the lower Brescia, to the mountain cuisine of the valleys up to the cuisine of the lakes characterized by fish, olive oil and citrus fruits. Surely the most characteristic dish is the spiedo alla bresciana (Brescia-style spit), other typical dishes of Brescia include: "riso alla pitocca", "brofadei", "gnocarei e mariconde" (a soup), casoncelli, "luccio e polenta", "tinca al forno" "polenta pasticciata", "polenta e uccelli", "frittata di rane", "anguilla ai ferri", "verzata" and also dessert such as "bossolà", "chisöl", "spongada" and "persicata".

The cuisine in Como is heavily influenced by its lake. Typical are dishes of fish, like the "missultin", agoni salted and sun-dried, or whitefish and pikefish. There is even a special polenta, called "toch", made with equal parts of corn flour, butter and cheese, a very difficult and rich (in every sense) dish. Some villages and valleys around the lake, such as Oliveto Lario, are one of the few parts of northern Italy where olive trees were historically grown, called for this "zoca de l'oil" (valley of the oil). In Canzo, Nocciolini, made with hazelnut flour, and the liqueur Vespetrò are typical.

Cremona's Mostarda (a rich condiment made with candied fruit and a mustard flavoured syrup) is known throughout Italy and so is Torrone, which is a typical dessert from this province.

Mantuan cuisine is noted for dishes of medieval origin and for sweet and sour flavors. Tortelli di zucca (ravioli with pumpkin filling) accompanied by melted butter and followed by turkey stuffed with chicken or other stewed meats [3] are one of the best known dishes from this area.

Pavia province is divided in a hilly area, the Oltrepo Pavese, which is one of the main winemaking areas of Lombardy, and a plains area to the north, Lomellina, where rice is grown. Not surprisingly, local specialties are rice dishes, such as "Risotto alla Certosina" and "Ris e Ran" (a risotto with frog meat) from Pavia and "Risotto coi Peperoni" and "Ris in Cagnon" (rice with ragu' meat sauce) from the town of Voghera. Traditional wines from Oltrepo Pavese are Bonarda, Barbera and Pinot Noir. Many of the local wines have curious names, like Buttafuoco (spitfire), Sangue di Giuda (the blood of Judas) and Barbacarlo (the beard of Charles; probably one of the rarest wines on earth with a production of only 10,000 bottles a year). White wines are made from the grape varieties of Malvasia, Moscato and Cortese. Oltrepo is becoming well known for its sparkling wines, in particular "Spumante" and "Cruase".[4] Voghera produces Agnolotti containing a beef filling which are known as "Agnolotti di stufato di Voghera" and are typically served "asciutti" (dry and not in a soup form) and dressed with a meat sauce (ragu'). Zuppa alla Pavese was supposedly invented on the spot to feed the captive king Francis I of France after his defeat at the Battle of Pavia on February 24, 1525. "Torta del Paradiso" is a cake from Pavia, which is also noted for the "Colomba Pasquale" a cake in the shape of a dove which is traditionally eaten at Easter. Voghera is noted for "Mostarda di Voghera", a pickled fruit accompaniment for boiled meats, and the "Zuppa di Voghera" a torte with coffee and cream and the "Stracchino di Voghera" a variety of gelato. "Bollito misto con Salsa Verde" is a specialty shared with Piedmontese and Emilian cuisines. In the Oltrepo Pavese a variety of hard doughnuts called "Brasade'", which originated in the tiny village of Staghiglione, is extremely popular for breakfast. A very simple pancake, known as "Schita" is eaten by children as a snack. The village of Varzi in the Oltrepo Pavese is renowned for its Salame, while the tiny village of Pometo is locally famous for its superb bread.[5]

Valtellina's specialties are Bresaola (air-dried salted beef) and Pizzoccheri (a flat ribbon pasta, made with 80% buckwheat flour and 20% wheat flour cooked along with greens, cubed potatoes and layered with pieces of Valtellina Casera cheese). Sfursat is a local wine which has attained DOCG status.