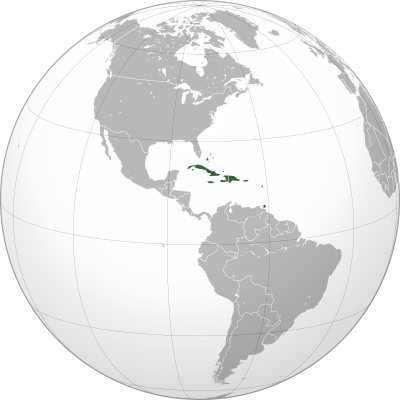 This a list of sovereign states and dependent territories in the West Indies.

The West Indies can be taken to mean all the countries in and around the Caribbean Sea that lies within an area that stretches from Grand Bahama Island in the north to Curaçao in the south, and French Guiana in the east to Belize in the west. This is an expanse (mostly of ocean) which measures about 1,000 miles (1,600 kilometres) from north to south, and over 2,500 miles (4,000 kilometres) from east to west.

Ignoring the Central and South American nations that border the Caribbean Sea (whose cultural and linguistic heritage sets their history out of the scope of the region) there is a total of thirteen independent or sovereign states and nine island groupings that remain dependencies in one form or another, to the nations of the United Kingdom, United States, France, and the Netherlands.[1]

Most sovereign states in the West Indies (and one British dependency) are members of the Caribbean Community, which is an international organisation formed to promote regional integration and collaboration among its member states.

Note that Bermuda, is a member of the Caribbean Community, though the nation lies in the Atlantic Ocean, not in the West Indies.

Montserrat is a member of both the Organisation of Eastern Caribbean States and the Caribbean Community despite being a dependent nation of the United Kingdom. The island regions of Martinique, Guadeloupe and the BES islands are not included here because they are not technically dependent territories of the countries mentioned, instead being integrated areas of France and the Netherlands respectively.

Depending on the speaker and the context, the phrase "Caribbean countries" has a variety of meanings:[34] Such as these images show below