French fries wrapped in a traditional paper cone, served with mayonnaise and curry ketchup, with a small plastic fork on top and a frikandel on the side. The frietkot is seen in the background.

An assortment of Belgian sauces 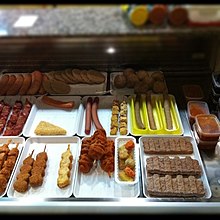 A typical assortment of meats offered at a Belgian friterie.

Even the smallest Belgian town has a frietkot (literally, "fries shack").[3] Traditionally, take-away fries were picked by the fingers out of a tip bag wrapped from a square sheet of paper, while walking on the streets. By the 1970s and 1980s, with several meat accompaniments gaining popularity, more practical open carton boxes and tiny plastic forks became available. One can order a small or large portion; often three or four sizes are priced. Fries with mayonnaise or one of a wide variety of other typical Belgian sauces is a fast food classic in Belgium, often eaten without any side orders. Prior to 1960, the choice of accompanying items was limited to a pickled herring, a cold large meatball boulet or red-coloured garlic sausage cervela, or a beef or horsemeat stew. Since 1960, these choices include stoofvlees or stoofkarbonade and a wide variety of deep-fried meats, such as chicken legs, beef or pork sticks, minced beef, pork, chicken, or turkey in all shapes (balls, sticks, sausages) mixed with a dosage of fat and condiments to one's preference. An example of an additional on-the-spot preparation is sometimes in Flanders called mammoet speciaal (mammoth special), a large frikandel (curryworst in Antwerp and Flemish Brabant) deep-fried and cut so as to put chopped onion in the V-shaped length and dressed with mayonnaise and (curry-)ketchup. The earliest of the current wide array of sauces, are mayonnaise, fritessaus or sauce pommes-frites ("fries sauce" in English—see the sections on France and the Netherlands) and a local pickle-sauce similar to piccalilli.[2][4] Though Belgians do not sprinkle vinegar on fries, they may eat them with cold mussels out of the shells preserved in vinegar, entirely uncomparable to the national dish with freshly boiled hot mussels served in the shells.

In Bulgaria, a serving of fries can be ordered with a covering of sirene, a grated white brine cheese.[5]

In Canada, French fries are the main component of a dish called poutine, a mixture of French fries with fresh cheese curds, covered with a hot gravy (usually), hot chicken sauce (much less common), or chicken BBQ sauce (rarely). This dish was invented in rural Quebec in the late 1950s and is now popular in many parts of the country and is served at many fast-food chains. Several Québécois communities claim to be the birthplace of poutine.[6] A variant, "disco fries", may be found in the Northeastern United States, notably in New Jersey.[7]

In Newfoundland, "chips, dressing and gravy" (referred to by outsiders as "Newfie fries"[8]) comprise French fries topped with "dressing" (turkey stuffing made with summer savory) and gravy. Another variation consists of topping the French fries with either ground beef, hot dogs, dressing and cheese and topped with gravy. Yet another Newfoundland recipe called a "mess" (compare with "poutine") consists of fries, gravy, dressing, and wieners.

In Prince Edward Island, "fries with the works" (or FWTW as it is some times called)[9] is a combination of French fries, fried hamburger, fried onions, gravy (usually beef), peas, and optionally mushrooms. Other common toppings include green onions, tomatoes, carrots, sour cream, and grated cheese.

In the Ottawa Valley, french fries are sold from trucks known as "chip wagons," and fries are available topped with melted butter. It is also customary for the server to allow the customer to add seasonings like salt, pepper, and vinegar halfway through filling the container.[10] 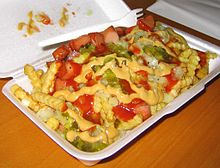 In Finland, french fries (ranskalaiset perunat) are colloquially known just as ranskalaiset (literally, "the French"). A traditional way of serving accompanied fries at food carts (grilli) is (literally, "sausage potatoes"), a dish consisting of deep-fried slices of sausage and crinkle-cut fries mixed together and usually served in either a paper or styrofoam tray. The dish probably originated in the early 1960s. Today, makkaraperunat is mainly considered a late-night snack and is usually not served outside of food carts or gas stations.

At fast food chains such as McDonald's, Burger King or the indigenous Hesburger, ketchup is always provided. Some chains also offer complimentary Finnish or American style mustard as well as packets of grillimauste, a type of barbecue rub. In kebab shops, fries are often partly or entirely covered in tomato-based and/or yoghurt-based kebab sauces and döner kebab strips. French fries are also used as sides for hamburgers, steaks and deep-fried meats at the ubiquitous American style restaurants and gastropubs in Finland. Crinkle-cut fries are seen as old-fashioned and associated with food carts or home-cooking, while straight-cut fries are seen as more modern.

In France, a common dish is fries and a steak. French fries are also popular as a side dish to kebabs, roasted or fried chicken, and hamburgers. The fries are often accompanied by ketchup, mayonnaise, Dijon mustard, and sometimes a vaguely béarnaise-like sauce called "sauce pommes frites" (found also under the same name and with a similar form in French-speaking Belgium, and in Dutch-speaking Belgium and the Netherlands as fritessaus), which is available at local McDonald's restaurants and in bottled form in supermarkets.[11]

In Iceland, french fries are served either salted or seasoned with a special blend of spices (including Salt, Sugar, Onion Powder, Garlic Powder, Black Pepper, MSG, and various other seasonings) marketed as French Fry Mix (kartöflukrydd), and accompanied by cocktail sauce or ketchup. Fries are commonly sold in fast food outlets as a side dish. The earliest mention of french fries in Iceland is in a cookbook published in 1945, under the title Potatoes boiled in lard.[citation needed]

In Ireland french fries are generally known as 'chips' (aside from the 'skinny' fries commonly served in some fast-food outlets). The accompaniments and condiments served with them are very similar to those served in the United Kingdom.

Some Japanese restaurants, such as First Kitchen, offer a variety of flavour packets that can be used to season the French fries. The packets consist of powdered flavouring and salt.[12]

Fries with "speciaal saus" is a popular combination in the Netherlands 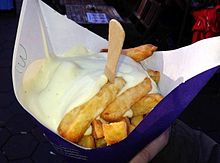 In the Netherlands, fries are popular as fast food and served in vending points similar to the ones in Belgium. Fries are served with mayonnaise or a lower-fat version called fritessaus (fries sauce), although the latter is often also referred to as mayonnaise. This combination is usually called patatje met (for "fries with"), as opposed to patatje zonder (fries without, without any sauce).

Other popular sauces are satésaus (satay sauce, a peanut sauce that is also served with the Indonesian meat sate), curry ketchup, and speciaal (special; a mixture of chopped raw onions, frietsaus, and curry ketchup or tomato ketchup). Another interesting combination is Patatje Oorlog (Dutch for French Fries War), which is French fries with mayonnaise, sate sauce, and onions, a variety that differs from region to region, and even from one snackbar to another. While it sometimes means mayonnaise (or rather, fritessaus, or fries sauce), peanut sauce and chopped raw onions, in other places it means the fries are accompanied with all condiments available.[15][16][17]

On average, Dutch snackbars typically offer between 9 and 10 different condiments to be eaten with fries, or to be combined (the condiments are rarely free in Dutch snackbars), but some venues serve many more.[18][19] A recently introduced way of serving fries is the kapsalon (hair salon, named so because Nataniël Gomes, a hairdresser from Rotterdam invented the dish), which consists of fries, shoarma (or another kebab style such as Doner), lettuce, molten cheese, hot sauce and garlic sauce in an aluminum foil tray which is then briefly baked in an oven.[20]

Another recent addition to the plethora of accompaniments is Joppiesaus, a mayonnaise-based sauce whose recipe is a trade secret. In 2013 a fast food store in Amsterdam started selling fries with cannabis sauce.[21][22][23]

Fries are often accompanied by other popular deep-fried fast foods such as the kroket and frikandel, but fries are also served as a side dish in regular restaurants.[24]

In the Philippines, they are often served with a sprinkling of powdered flavors, primarily cheese, sour cream, or barbecue. In some fast food chains, these are topped with cheese sauce and minced bacon. They also serve fries with ketchup and some restaurants serves it with gravy.[25][26] Banana Ketchup (ketchup made from bananas instead of tomatoes) is also a very popular french fry accompaniment in the Philippines.

In Romania, fried potatoes are sometimes served with mujdei, a popular garlic sauce,[27] or sprinkled with grated or crumbled brânză (a kind of sheep milk cheese).[28] Fries are a popular side dish with grilled steaks, schnitzels and mititei, and are also a frequent ingredient in shawarmas.

In the South Africa french fries are generally known as 'chips' (aside from the 'skinny' fries commonly served in some fast-food outlets). They are normally made with potatoes that have been soaked in vinegar beforehand. They are often known as "Slap Chips" (slap being the word for soft in Afrikaans) as the soaking in vinegar process makes them soft and soggy. After cooking they are normally served with accompaniments of salt and vinegar.

In Turkey, they are popular as a side dish to hamburger. In fast food restaurants, they are mostly served with ketchup, mayonnaise and dijon mustard. But in the traditional restaurants -especially in sea foods restaurants- they are served with special fries sauce which includes tomatoes, parsley, lemon, garlic and olive oil.[29] Also this special fries sauce using with mixture of vegetable fries which includes potatoes, aubergine, green pepper, zucchini.

In Thailand, French fries are called man farang thot (Thai: มันฝรั่งทอด; lit. 'deep fried potato') but are also commonly known as fren frai (Thai: เฟรนซ์ฟรายด์, or Thai: เฟรนช์ฟรายด์). Besides being available from the usual Western fast food outlets or in areas with a large Western (tourist) population,[30][31] they are increasingly popular at local Thai bars and nightlife venues as a snack.[32] French fries in Thailand are usually served with either tomato ketchup or chili sauce.[33][34][35]

In the United Kingdom french fries are generally known as 'chips' (aside from the 'skinny' fries commonly served in some fast-food outlets). The archetypal British take-away meal is fish and chips. The traditional accompaniments are table salt and malt vinegar although these days the majority of chip shops and fast food outlets provide a cheaper 'non-brewed condiment' alternative made from acetic acid along with water and ammonia caramel colouring. Other popular accompaniments include tomato ketchup (known as "red sauce" in Wales and as "tomato sauce" in certain parts of the country), brown sauce, chippy sauce (brown sauce mixed with vinegar and/or water and popular around the Edinburgh area of Scotland only), barbeque sauce, worcestershire sauce, partially melted cheddar cheese (cheesy chips), mint sauce, mushy peas, baked beans, curry sauce, gravy, mayonnaise, salad cream, aioli, tartare sauce, mustard and chilli sauce.

Whole cut fries with a burger, served in an American diner.

The consumption of restaurant fries drives ketchup sales throughout the United States.[36] Regionally throughout the nation, other french fry accompaniments are sometimes preferred. Chili cheese fries and cheese fries are common in many communities in diners and fast food chains. Examples of more localized preferences include New Jersey's disco fries (with brown gravy and mozzarella cheese) and Utah-style fry sauce (a combination of ketchup and mayonnaise).[37]

Steak fries are thicker-cut fries, often with the skins intact. They are often coated with spices or marinated before cooking. They may be fried or baked in the oven.[38]

In Vietnam, some restaurants are usually found serving fries with sugar over a dollop of soft butter.[39]