Languages of the region 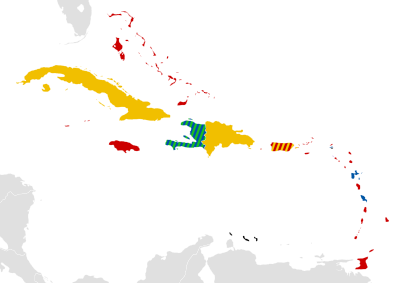 Spanish-speakers are the most numerous in the Caribbean. English is the first or second language in most Caribbean islands and is also the unofficial "language of tourism", the dominant industry in the Caribbean region. In the Caribbean, the official language is usually determined by whichever colonial power (England, Spain, France, or the Netherlands) held sway over the island first or longest.

The first permanent English colonies were founded at Saint Kitts (1624) and Barbados (1627). The English language is the third most established throughout the Caribbean; however, due to the relatively small populations of the English-speaking territories, only 14%[2] of West Indians are English speakers. English is the official language of about 18 Caribbean territories inhabited by about 6 million people, though most inhabitants of these islands may more properly be described as speaking English creoles rather than local varieties of standard English.

The Caribbean English-speakers are outnumbered by Spanish speakers by a ratio of about four to one due to the high densities of populations on the larger, Spanish-speaking, islands; some 64% of West Indians speak Spanish. The countries that are included in this group are Cuba, the Dominican Republic, Puerto Rico, Belize, and some islands off Central (Cozumel, Isla Mujeres, San Andrés and Providencia, Corn Islands, The Bay Islands) and South America (Federal Dependencies of Venezuela and Nueva Esparta).

About one-quarter of West Indians speak French or a French-based creole. They live primarily in Guadeloupe and Martinique, both of which are overseas departments of France; Saint Barthélemy and the French portion of Saint Martin (where the local language is English, but not an official language), both of which are overseas collectivities of France; the independent nation of Haiti (where both French and Haitian Creole are official languages);[3][4] and the independent nations of Dominica and Saint Lucia, which are both officially English-speaking but where the French-based Antillean Creole is widely used, and French to a lesser degree.

Dutch is an official language of the Caribbean islands that remain under Dutch sovereignty. However, Dutch is not the dominant language on these islands. On the islands of Aruba, Curaçao and Bonaire, a creole based on Portuguese and West African languages known as Papiamento is predominant, while in Sint Maarten, Saba and Sint Eustatius, English, as well as a local English creole, are spoken. A Dutch creole known as Negerhollands was spoken in the former Danish West Indian islands of Saint Thomas and Saint John, but is now extinct. Its last native speaker died in 1987.[5]

Caribbean Hindustani is a form of the Bhojpuri and Awadhi dialect of Hindustani (Hindi-Urdu) spoken by descendants of the indentured laborers from India in Trinidad and Tobago, Guyana, Suriname, and other parts of the Caribbean.[6]

Several languages spoken in the Caribbean belong to language groups concentrated or originating in the mainland countries bordering on the Caribbean: Suriname, Guyana, French Guiana, Brazil, Venezuela, Colombia, and Peru.

Many indigenous languages (actually spoken with the mainland Caribbean rather than the islands) have been added to the list of endangered or extinct languages—for example, Arawak languages (Shebayo, Igñeri, Lokono, Garifuna of St. Vincent, and the one now labeled Taíno by scholars, once spoken in the Greater Antilles), Caribbean (Nepuyo and Yao), Taruma, Atorada, Warrau, Arecuna, Akawaio and Patamona. Some of these languages are still spoken there by a few people.[7][8]

Creoles are contact languages usually spoken in rather isolated colonies, the vocabulary of which is mainly taken from a European language (the lexifier).[9] Creoles generally have no initial or final consonant clusters but have a simple syllable structure which consists of alternating consonants and vowels (e.g. "CVCV").[10]

A substantial proportion of the world's creole languages are to be found in the Caribbean and Africa, due partly to their multilingualism and their colonial past. The lexifiers of most of the Caribbean creoles and patois are languages of Indo-European colonizers of the era. Creole languages continue to evolve in the direction of European colonial languages to which they are related, so that decreolization occurs and a post-creole continuum arises. For example, the Jamaican sociolinguistic situation has often been described in terms of this continuum.[11] Papiamento, spoken on the so-called 'ABC' islands (Aruba, Bonaire, and Curaçao), shows traces of both indigenous languages and Spanish,[12] Portuguese, and Dutch lexicons.).

In Jamaica though generally English-speaking island, a patois, often called "patwa" drawing on a multitude of influences including Spanish, Portuguese, Hindi, Arawak and African languages as well as Irish. In Barbados, a dialect often known as "bajan" have influences from West African languages that can be heard on a regular daily basis.

Contact between French- and English-lexified creoles is fairly common in the Lesser Antilles (apart from Saint Lucia), and can also be observed on Dominica, Saint Vincent, Carriacou, Petite Martinique and Grenada.[13]

Trade languages are another age-old phenomenon in the Caribbean linguistic landscape. Cultural and linguistic innovations that spread along trade routes, and languages of peoples dominant in trade, developed into languages of wider communication (linguae francae). Of particular importance in this respect are French (in the central and east Caribbean) and Dutch (in the south and the east Caribbean).

After gaining independence, many Caribbean countries, in the search for national unity, selected one language (generally the former colonial language) to be used in government and education. In recent years, Caribbean countries have become increasingly convinced of the importance of linguistic diversity. Language policies that are being developed nowadays are mostly aimed at multilingualism.[16]

Of the 38 million West Indians (as of 2001),[17] about 62% speak Spanish (a west Caribbean lingua franca). About 25% speak French, about 15% speak English, and 5% speak Dutch. Spanish and English are important second languages: 24 million and 9 million speak them as second languages.

The following is a list of major Caribbean languages (by total number of speakers)[needs updating]:

Some linguistic features are particularly common among languages spoken in the Caribbean, whereas others seem less common. Such shared traits probably are not due to a common origin of all Caribbean languages. Instead, some may be due to language contact (resulting in borrowing) and specific idioms and phrases may be due to a similar cultural background.

Widespread syntactical structures include the common use of adjectival verbs for e.g.:" He dirty the floor. The use of juxtaposition to show possession as in English Creole, "John book" instead of Standard English, "John's book", the omission of the copula in structures such as "he sick" and "the boy reading". In Standard English, these examples would be rendered, 'he seems/appears/is sick' and "the boy is reading".

Quite often, only one term is used for both animal and meat; the word nama or nyama for animal/meat is particularly widespread in otherwise widely divergent Caribbean languages.