Kheer or Payasam is a type of pudding from the Indian subcontinent, made by boiling milk and sugar with one of the following: rice, broken wheat, millet, tapioca, vermicelli, or sweet corn. It is flavoured with desiccated coconut, cardamom, raisins, saffron, cashews, pistachios, almonds or other dry fruits and nuts. It is typically served during a meal or as a dessert.

The word 'Kheer' is derived from the Sanskrit word for milk, Ksheer(क्षीर). Ksheer is also the archaic name for sweet rice pudding.[3]

Kheer was a part of the ancient Indian diet and is mentioned in the Ayurveda.[4]

According to the food historian K. T. Achaya, kheer or payas, as it is known in southern India, was a popular dish in ancient India, first mentioned in ancient Indian literature, it was a mixture of rice, milk and sugar, a formula that has endured for over two thousand years. Payas was also a staple Hindu temple food, in particular, it was associated with Lord Shiva and served as Prasāda to his devotees.[5]

Payasam was always the main sweet dish at Hindu temples and part of their celebrations. It was mainly served in sadhya in marriage functions of Nair community. Other terms like Payasam or payesh (used in the Bengal region) are derived from the Sanskrit word Payasa or Payasam, which also means "milk". It is prepared using milk, rice, ghee, sugar/jaggery, and khoya but is less thick than original kheer. Some also add a little bit of heavy cream for a richer taste. It is often garnished using almonds, cashews, raisins and pistachios. There is one more popular version of North Indian kheer, prepared during festivals and havan in Varanasi by using only milk, rice, ghee, sugar, cardamom, dried fruit, and kesar (saffron milk). It is an essential dish in many Hindu feasts and celebrations. While the dish is most often made with rice, it can also be made with other ingredients, such as vermicelli (semiya in South India, seviyan, seviyaan, sayviah, or other spellings) or tapioca (locally known as sabudana). In Kashmir, firni is made with semolina (suji), milk, saffron, sugar, dry fruits, etc.[6]

In Gujarat, a variation of kheer known as dūdpāk, દૂધપાક, is also made. The ingredients remain largely the same, but the cooking process is different and wdudhpak is less dense and thick than kheer.

Rice was known to the Romans, and possibly introduced to Europe as a food crop, dating as early as the 8th or 10th Century AD,[7] and so the recipe for the popular English rice pudding is believed by some to be descended from kheer.[better source needed] Similar rice recipes (originally called potages) go back to some of the earliest written recipes in English history.[8]

Payes made of date molasses, popular in Odisha and Bengal. 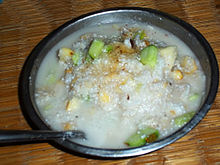 Sagukhiri, a khiri made in Odisha.

The Odia version of rice kheer (known as Kheeri) and (Payas in Northern Odisha) likely originated in the city of Puri, in Odisha more than 2,000 years ago.[9][10] Although original Kheer Payas originated as two separate dishes, they are increasingly considered by some to be similar but it is not. The Odia version has more fruits and is little less thicker. Payas are cooked to this day within the temple precincts there wheres as Kheer is available in restaurants mostly during Ramadan. Every single day, hundreds of temple cooks work around 752 hearths in what is supposed to be the world's largest kitchen to cook over 100 different dishes, including kheer, enough to feed at least 10,000 people.

Payas is also regarded as an auspicious food and generally associated with annaprashana (weaning ritual of an infant), as well as other festivals and birthday celebrations in an Odia household.

Although white sugar is commonly used, adding Gurh (jaggery) as a sweetener, is a variation prepared in Bengal and Odisha, especially during winter and spring when fresh gurh is available.

In Bengal, it is called payas or payesh. A traditional Bengali meal can be traced 2000 years old[citation needed] and it is one of important sweet dishes payas followed by other sweets.

Payesh is also regarded as an auspicious food and generally associated with annaprashana (weaning ritual of an infant) and Janmatithi (birthday) in a Bengali household. Payesh is made with rice (preferably gobindobhog rice), milk, and "guur" (jaggery/molasses) or sugar, often with raisins, cashew nuts, and cardamom as well. The people of West Bengal and Bangladesh prepare payesh variously with gurh, ketaki, glutinous rice (usually gobindobhog rice), vermicelli, semolina and coconut milk, and the result is a stickier and creamier dessert. Bengali kheer (which is different to payesh and is not to be confused with the Hindi word "kheer") does not have rice, and is made by prolonged boiling of milk with either sugar or gurh till the milk fat solidifies as thick flakes (heating it even longer would make rabri).

In Assam, it is called payoxh and in addition to other dried fruits, cherries are added to give it a light delicate pink colour. Sometimes rice may be replaced with sago. It is one of the most significant desserts served in Assamese families and quite often a part of religious ceremonies.

In Bihar, it is called "Chawal ki Kheer".[11] It is made with rice, full fat cream, milk, sugar, cardamom powder, an assortment of dried fruits, and saffron. Another version of this kheer, called Rasiya, is made with jaggery. Jaggery is used instead of sugar in the process. The jaggery version looks brown in color and has a mild, sweet taste. 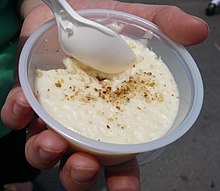 In a South Indian meal, payasam or payasa, is served first at any formal or auspicious occasion. Payasam is also served after rasam rice, while rice with buttermilk forms the last item of the meal.[12] Payasam also forms an integral part of the Kerala feast (sadya), where it is served and relished from the flat banana leaf instead of cups. In Malayalee or Kerala cuisine, there are several different kinds of payasam that can be prepared from a wide variety of fruits and starch bases, an example being chakkapradhaman made from jackfruit pulp and adapradhaman made from flat ground rice.

The Hyderabadi version is called gil-e-firdaus. It is a thick kheer made with milk and bottle gourd. Gil-e-firdaus, literally translated, means "the clay of paradise".

Firni or phirni, also known as "Indian rice pudding", allowed to set in a shallow earthen dish, and garnished with strands of saffron, chopped almonds and pistachios.

Across the Subcontinent, Payasam/Paisam is prepared and eaten at festivals. It is offered to Hindu deities as a bhog or prasadam. Since it is watery and contains vermicelli, it is tight to call it Payasam/Paisam but not Kheer.

Among the Muslims of the Indian subcontinent, the dish is mainly consumed during Ramadan and prepared for the feasts of Muslim weddings and festivals, such as Eid ul-Fitr and Eid ul-Adha.

A similar dessert, known as firni, is eaten in Iran, Azerbaijan, Afghanistan and among the Muslim communities of India, Bangladesh and Pakistan. Today, restaurants offer firni in a wide range of flavours, similar to kheer. Firni uses ground rice rather than whole rice.