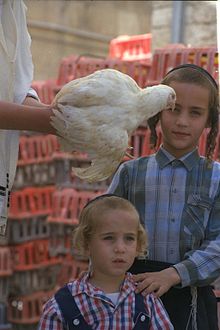 Kapparot ritual on the eve of Yom Kippur

Kapparot (Hebrew: כפרות‎, Ashkenazi transliteration: Kapporois, Kappores) is a customary atonement ritual practiced by some Jews on the eve of Yom Kippur. This is a practice in which a chicken or money is waved over a person's head and the chicken is then slaughtered in accordance with halachic rules. 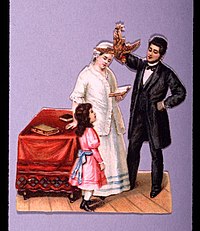 The Shochet with Rooster by Israel Tsvaygenbaum, 1997

On the afternoon before Yom Kippur, one prepares an item to be donated to the poor for consumption at the pre-Yom Kippur meal,[2] recites the two biblical passages of Psalms 107:17-20 and Job 33:23-24, and then swings the prepared charitable donation over one's head three times while reciting a short prayer three times.

A vendor at Mahane Yehuda Market in Jerusalem sells roosters for kapparot before Yom Kippur.

In one variant of the practice of kapparot, the item to be donated to charity is a rooster. In this case, the rooster would be swung overhead while still alive. After the kapparot ritual is concluded, the rooster would be treated as a normal kosher poultry product, i.e., it would be slaughtered according to the laws of shechita. It would then be given to charity for consumption at the pre-Yom Kippur meal. In modern times, this variant of the ritual is performed with a rooster for men and a hen for women.

In this case, the prayer recited translates as:

This is my exchange, this is my substitute, this is my atonement. This rooster (hen) will go to its death, while I will enter and proceed to a good long life and to peace.[3]

In a second variant of the practice of kapparot, a bag of money is swung around the head and then given to charity.[4]

In this case, the prayer recited translates as:

This is my exchange, this is my substitute, this is my atonement. This money will go to charity, while I will enter and proceed to a good long life and to peace.[5]

The practice of kapparot is mentioned for the first time by Amram Gaon of Sura Academy in Babylonia in 670 and later by Natronai ben Hilai, also of Sura Academy, in 853. Jewish scholars in the ninth century explained that since the Hebrew word גבר[6] means both "man" and "rooster", a rooster may substitute as a religious and spiritual vessel in place of a man. 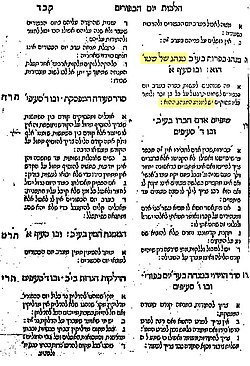 The original printing of Joseph ben Ephraim Karo's Shulchan Aruch, Orach Chayim, ch. 605, states in the chapter heading that kapparot is a nonsensical custom that should be abolished. Later editions removed this. However, according to Samson Morpurgo, (Shemesh Tsedakah, 1:23) the chapter heading was not written by Rabbi Karo but was inserted by the publishers.

Kapparot was strongly opposed by some rabbis, among them Nachmanides, Shlomo ben Aderet, and the Sephardi rabbi Joseph ben Ephraim Karo in the Shulchan Aruch. According to the Mishnah Berurah, his reasoning was based on the caution that it is similar to non-Jewish rites.

The Ashkenazi rabbi Moses Isserles disagreed with Karo and encouraged kapparot.[7] In Ashkenazi communities especially, Rabbi Isserles' position came to be widely accepted, since Ashkenazi Jews will generally follow the halachic rulings of Rabbi Isserles where the Sephardic and Ashkenazic customs differ. It was also approved by Asher ben Jehiel (c. 1250–1327) and his son Jacob ben Asher (1269–1343) and other commentators. The ritual was also supported by Kabbalists, such as Isaiah Horowitz and Isaac Luria, who recommended the selection of a white rooster as a reference to Isaiah 1:18 and who found other mystic allusions in the prescribed formulas. Consequently, the practice became generally accepted among the Ashkenazi Jews and Hasidim of Eastern Europe. The Mishnah Berurah agrees with Rabbi Isserles, solidifying support for the practice among Lithuanian Jews as well. The Mishnah Berurah only supports the use of money (i.e., not a chicken) if there might be a problem with the slaughter due to haste or fatigue.[8]

In the late 19th-century work Kaf Hachaim, Yaakov Chaim Sofer approves of the custom for Sephardi Jews as well.

Some Jews also oppose the use of chickens for kapparot on the grounds of tza'ar ba'alei chayim, the principle banning cruelty to animals.[9]

On Yom Kippur eve 2005, a number of caged chickens were abandoned in rainy weather as part of a kapparot operation in Brooklyn, New York; some of these starving and dehydrated chickens were subsequently rescued by the American Society for the Prevention of Cruelty to Animals.[10] Jacob Kalish, an Orthodox Jewish man from Williamsburg, Brooklyn, was charged with animal cruelty for the drowning deaths of 35 of these kapparot chickens.[11] In response to such reports of the mistreatment of chickens, Jewish animal rights organizations have begun to picket public observances of kapparot, particularly in Israel.[12][13]

The kapparot ritual would seem to be constitutionally protected as an exercise of freedom of religion in the United States, based upon a 1993 Supreme Court of the United States decision in the case of Church of the Lukumi Babalu Aye v. City of Hialeah. In that case, the court upheld the right of Santería adherents to practice ritual animal sacrifice, with Justice Anthony Kennedy stating in the decision, "Religious beliefs need not be acceptable, logical, consistent or comprehensible to others in order to merit First Amendment protection" (quoted by Justice Kennedy from the opinion by Justice Warren E. Burger in Thomas v. Review Board of the Indiana Employment Security Division, 450 U.S. 707 (1981)).[14] However, the Supreme Court's principal concern in its decision was that the City of Hialeah specifically targeted as religious ritual, curbing the religious rights of a specific community, which conflicts with the First Amendment's Establishment Clause.

In October, 2017, public health and animal rights activists in New York City launched a campaign to compel NYC's Health Commissioner, Dr. Mary Bassett, to enforce seven public health codes violated during kapporot.[15] From October 2017 to May 2018, the activists disrupted four of her public speaking engagements and staged four protests in the lobby of the NYC Department of Health (DOH).[16] The activists alleged that Commissioner Bassett was turning a blind eye to the health code violations because the ultra-Orthodox Jews who practiced the ritual represented a powerful voting bloc. A toxicology report submitted to the court as part of an ongoing lawsuit against the DOH stated that the ritual posed a risk to public health in the neighborhoods where it took place.[17] While Commissioner Bassett has not publicly acknowledged the toxicology report or the activists' claims about the health code violations, she has issued a public statement asserting that "there remains no evidence that the use of chickens for Kaporos poses a significant risk to human health."[18]