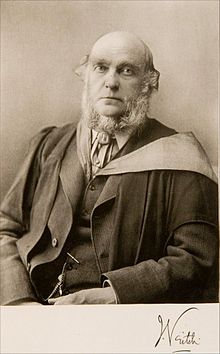 Prof John Veitch (October 24, 1829 – September 3, 1894), Scottish poet, philosopher, and historian, son of a Peninsular War veteran, was born at Peebles, and educated at the University of Edinburgh.[1]

He was assistant lecturer successively to Sir William Hamilton and Alexander Campbell Fraser (1856–60). In 1860 he was appointed to the chair of logic, metaphysics and rhetoric at the University of St Andrews, and in 1864 to the corresponding chair at the University of Glasgow.[1]

He lived at 8 Playfair Terrace in St Andrews.[2]

In philosophy an intuitionist, he dismissed the idealist arguments with some abruptness, and thereby lost much of the influence gained by the force of his personal character. He will be remembered chiefly for his work on Border literature and antiquities. See Memoir by his niece, Mary RL Bryce (1896).[1]