Jaggery is a traditional non-centrifugal cane sugar[1] consumed in Asia.[2] It is a concentrated product of cane juice and often date or palm sap without separation of the molasses and crystals, and can vary from golden brown to dark brown in colour, and is similar to the Latin American panela.[2] It contains up to 50% sucrose, up to 20% invert sugars, and up to 20% moisture, with the remainder made up of other insoluble matter, such as wood ash, proteins, and bagasse fibres.[2]

The word "jaggery" comes from Portuguese, ultimately from the Sanskrit शर्करा (śarkarā), the root of the word "sugar" itself.[3] 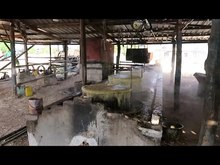 Jaggery is made of the products of sugarcane and the toddy palm tree. The sugar made from the sap of the date palm is more prized and less commonly available outside of the regions where it is made. The toddy palm is tapped for producing jaggery in India, Bangladesh, Pakistan, Nepal, and Sri Lanka.

All types of the sugar come in blocks or pastes of solidified concentrated sugar syrup heated to 200 °C (392 °F). Traditionally, the syrup is made by boiling raw sugarcane juice or palm sap in large, shallow, round-bottomed vessels.

Historically, the sugarcane cultivators used crushers that were powered by oxen, but all modern crushers are power-driven. These crushers are placed in fields near the sugarcane plants. The cut and cleaned sugarcane is crushed and the extracted cane juice is collected in a large vessel. A certain quantity of the juice is transferred to a smaller vessel for heating on a furnace.

The vessel is heated for about an hour. Dried wood pulp from the crushed sugarcane is traditionally used as fuel for the furnace. While boiling the juice, lime is added to it so that all the wood particles rise to the top of the juice in a froth, which is skimmed off. Finally, the juice is thickened. The resulting thick liquid is about one-third of the original volume.

This hot liquid is golden. It is stirred continuously and lifted with a spatula to observe whether it forms a thread or drips while falling. If it forms many threads, it has completely thickened. It is poured into a shallow flat-bottomed pan to cool and solidify. The pan is extremely large to allow only a thin coat of this hot liquid to form at its bottom, so as to increase the surface area for quick evaporation and cooling. After cooling, the jaggery becomes a soft solid that is molded into the desired shape. The quality of jaggery is judged by its colour; brown means it is higher in impurities and golden-yellow implies it is relatively pure. Due to this grading scale, coloured adulterants are sometimes added to jaggery to simulate the golden hue.

Jaggery is used as an ingredient in sweet and savoury dishes in the cuisines of India, Bangladesh, Nepal, Sri Lanka, Afghanistan, Iran and Pakistan. For example, a pinch of it is sometimes added to sambar, rasam, and other staples. Jaggery is added to lentil soups (dāl) to add sweetness to balance the spicy, salty, and sour components, particularly in Gujarati cuisine.

In Sri Lanka, jaggery is usually made using the syrup of the kithul palm tree, or from coconut syrup. The respective names in Sinhalese are kitul hakuru (කිතුල් හකුරු) and pol hakuru (පොල් හකුරු). Jaggery from the syrup of the Palmyrah palm is more prominent in the northern part of the country; this is referred to as palmyrah jaggery or thal hakuru (තල් හකුරු). Jaggery made from sugarcane syrup is considered inferior to these types of palm syrup based jaggery varieties, and the term jaggery (හකුරු) is generally understood in the country to refer to palm syrup based jaggery rather than sugarcane jaggery.[4]

Maharashtra in India is the largest producer and consumer of jaggery (gur (गुड़) in Hindi, "gul" (गुळ) in Marathi, "gur" (گڑھ) in Urdu, "bellam" (బెల్లం) in Telugu, and bella (ಬೆಲ್ಲ) in Kannada).

Kolhapur is one of the largest producers of jaggery in India and has a GI Tag for Jaggery.[5] Most vegetable dishes, curries, and dals, and many desserts contain it. Jaggery is especially used during Makar Sankranti for making a dessert called tilgul. In Gujarat, jaggery is known as gôḷ (ગોળ); during Makara Sankranti, a similar preparation called tal na ladu or tal sankli is made. In rural Maharashtra and Karnataka, water and a piece of jaggery are given to a person arriving home from working under a hot sun.

Molasses (काकवी), a byproduct of the production of jaggery, is used in rural Maharashtra and Karnataka as a sweetener. It contains many minerals not found in ordinary sugar and is considered beneficial to health in traditional Ayurvedic medicine.[6] It is an ingredient of many sweet delicacies, such as gur ke chawal / chol ("jaggery rice"), a traditional Rajasthani or Punjabi dish. 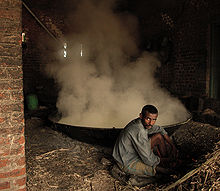 Jaggery preparation by heating juice in the vessel on furnace

In Gujarat, laddus are made from wheat flour and jaggery. A well-known Maharashtrian recipe, puran poli, uses it as a sweetener apart from sugar. Jaggery is considered an easily available sweet which is shared on any good occasion. In engagement ceremonies, small particles of it are mixed with coriander seeds (ધાણા). Hence, in many Gujarati communities, engagement is commonly known by the metonym gol-dhana (ગોળ-ધાણા), literally "jaggery and coriander seeds".

Jaggery is used extensively in South India to balance the pungency of spicy foods. In Andhra Pradesh, it is used for sweets like chakkara pongali, milk pongali (prepared with rice, milk, jaggery). During Sankranti they prepare 'Ariselu' which is an authentic Andhra Pradesh dish. A sweet liquid called "Paanakam", made of water, jaggery and peppercorns is prepared as the favorite offering to Lord Rama on the auspicious SreeRaamaNavami festival. In Kerala, it is considered auspicious and is widely used in cooking. It is a vital ingredient in many varieties of payasam, a sweet dish.

In Tamil Nadu, jaggery is used exclusively as a sweetener. It is used in a dish called chakkarai pongal. It is prepared during the festival of Pongal (Thai Pongal), which is held when the harvesting season begins. It is used to make kalhi, to sweeten fruit salads and payasam (sweet milk) that are offered to the Gods. Jaggery is used in religious rituals. In rural areas, cane jaggery and palm jaggery are used to sweeten beverages, whereas refined sugar has replaced it in urban areas. 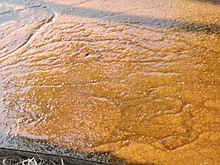 Semisolid sugarcane juice drying in another pan for preparation of jaggery: a practice in India

In Odia cuisine, cakes or piṭhas contain jaggery. Pithas like Arisa pitha are made out of jaggery called as guda in Odia. Kakara pitha contains coconut filings which are caramelized using jaggery. Guda is also added to rice flakes called as chuda and eaten as breakfast. Some marmalade made of mango and dillenia contain the ingredient.

In Bengali Hindu cuisine, it is commonly used in making sweet dishes, some of which mix jaggery with milk and coconut. Popular sweet dishes such as laḍḍu/laṛu or paṭishapta piṭha mix it with coconut shreds. Jaggery is molded into novel shapes as a type of candy. The same preparation of sweets have been made in its neighbouring state of Assam. Some of the popular sweet dishes of Assam such as til-pitha (made of rice powder, sesame and jaggery), other rice-based pitha, and payas are made of jaggery. In some villages of Assam, people drink salty red tea with a cube of gurd (jaggery), which is popularly called cheleka-chah (licking tea).

Traditional Karnataka sweets, such as paayasa, obbattu (holige) and unday use different kinds of jaggery. A pinch is commonly added to sambar (a.k.a. huLi saaru) and rasam (a.k.a. saaru). Karnataka produces sugar- and palm-based jaggery. The combination of crushed jaggery with ghee is excellent and goes well with chapathi.

In Myanmar, jaggery is harvested from toddy palm syrup. In central Myanmar and around Bagan (Pagan), toddy syrup is collected solely for making jaggery. The translucent white syrup is boiled until it becomes golden brown and then made into bite-size pieces. It is considered a sweet and is eaten by children and adults alike, usually in the afternoon with a pot of green tea. It has been referred to locally as Burmese chocolate. Toddy palm jaggery is sometimes mixed with coconut shreds, jujube puree or sesame, depending on the area. This type of jaggery is used in Burmese cooking, usually to add colour and enrich the food.

Other uses include jaggery toffees and jaggery cake made with pumpkin preserve, cashew nuts, peanuts and spices. Jaggery may be used in the creation of alcoholic beverages such as palm wine.

Besides being a food, jaggery may be used (mixed in an emulsion with buttermilk and mustard oil) to season the inside of tandoor ovens.[7]

Jaggery is used in natural dying of fabric. It is also used in hookahs in rural areas of Pakistan and India. 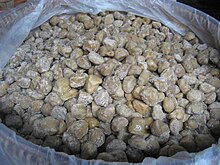 Burmese jaggery at a market in Mandalay 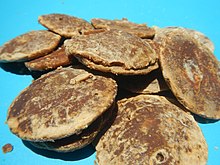 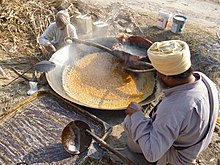