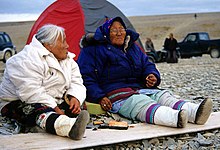 Traditionally Inuit cuisine consisted of a diet of foods that were fished, hunted, and gathered locally. In the 20th century the Inuit diet began to change and by the 21st century the diet was closer to a Western diet. Although traditional or country foods still play an important role in the identity of Inuit, a large amount of food is purchased from the store, which has led to health problems and food insecurity.[1][2]

According to Edmund Searles in his article "Food and the Making of Modern Inuit Identities", they consume this type of diet because a mostly meat diet is "effective in keeping the body warm, making the body strong, keeping the body fit, and even making that body healthy".[3]

There has been a decline of hunting partially due to the fact that most young people lack the skills to survive off the land. They are no longer skilled in hunting like their ancestors and are growing more accustomed to the Qallunaat ("white people") food that they receive from the south. The high costs of hunting equipment—snowmobiles, rifles, sleds, camping gear, gasoline, and oil—is also causing a decline in families who hunt for their meals.[10] 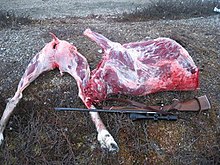 Because the climate of the Arctic is ill-suited for agriculture and lacks forageable plant matter for much of the year, the traditional Inuit diet is lower in carbohydrates and higher in fat and animal protein compared to the global average. When carbohydrate intake is inadequate for total energy requirements, protein is broken down in the liver through gluconeogenesis and utilized as an energy source. Inuit studied in the 1970s were found to have abnormally large livers, presumably to assist in this process. Their urine volumes were also high, a result of additional urea which the body uses to purge waste products from gluconeogenesis.[11] However, in multiple studies the traditional Inuit diet has not been shown to be a ketogenic diet.[12][13][14][15] Not only have multiple researchers been unable to detect any evidence of ketosis resulting from the traditional Inuit diet, but the ratios of fatty-acid to glucose were observed to be well below the generally accepted level of ketogenesis.[12][13][14][15]

Inuit actually consume more carbohydrates than most nutritionists have assumed.[16] Because some of the meat the Inuit eat is raw and fresh, or freshly frozen, they can obtain more carbohydrates from their meat, as dietary glycogen, than Westerners can.[16][17] The Inuit practice of preserving a whole seal or bird carcass under an intact whole skin with a thick layer of blubber also permits some proteins to ferment, or hydrolyze, into carbohydrates.[16] Furthermore, the blubber, organs, muscle and skin of the marine mammals that Inuit eat have significant glycogen stores, which assist those animals when oxygen is depleted on prolonged dives.[18][19][20] For instance, when blubber is analyzed by direct carbohydrate measurements, it has been shown to contain as much as 8—30% carbohydrates.[19] While postmortem glycogen levels are often depleted through the onset of rigor mortis, marine mammals have a much delayed onset of rigor mortis, even in warm conditions, presumably due to the high content of oxymyoglobin in the muscle that may permit aerobic metabolism to continue slowly for some time after the death of the animal.[19][21] Additionally, in cold conditions, glycogen's depletion is halted at -18 °C (-0.4 °F) and lower temperatures in comminuted meat.[22][23]

Traditional Inuit diets derive approximately 50% of their calories from fat, 30–35% from protein and 15–20% of their calories from carbohydrates, largely in the form of glycogen from the raw meat they consumed.[24][25] This high fat content provides valuable energy and prevents protein poisoning, which historically was sometimes a problem in late winter when game animals grew lean through winter starvation. It has been suggested that because the fats of the Inuit's wild-caught game are largely monounsaturated and rich in omega-3 fatty acids, the diet does not pose the same health risks as a typical Western high-fat diet.[26] However, actual evidence has shown that Inuit have a similar prevalence of coronary artery disease as non-Inuit populations and they have excessive mortality due to cerebrovascular strokes, with twice the risk to that of the North American population.[27][28] Indeed, the cardiovascular risk of this diet is so severe that the addition of a more standard American diet has reduced the incidence of mortality in the Inuit population.[29] Furthermore, fish oil supplement studies have failed to support claims of preventing heart attacks or strokes.[30][31][32]

Vitamins and minerals which are typically derived from plant sources are nonetheless present in most Inuit diets. Vitamins A and D are present in the oils and livers of cold-water fishes and mammals. Vitamin C is obtained through sources such as caribou liver, kelp, muktuk, and seal brain; because these foods are typically eaten raw or frozen, the vitamin C they contain, which would be destroyed by cooking, is instead preserved.[33]

Searles defines Inuit food as mostly "eaten frozen, raw, or boiled, with very little mixture of ingredients and with very few spices added."[3] Some preparations include:

One common way to eat the meat hunted is frozen. Many hunters will eat the food that they hunt on location where they found it. This keeps their blood flowing and their bodies warm. One custom of eating meat at the hunting site pertains to fish. In Overland to Starvation Cove: A History, Heinrich Klutschak explains the custom: "...no fish could be eaten in a cooked state on the spot where caught but could only be enjoyed raw; only when one is a day's march away from the fishing site is it permitted to cook the fish over the flame of a blubber lamp."[34]

Inuit eat only two main meals a day, but it is common to eat many snacks every hour.[34] Customs among Inuit when eating and preparing food are very strict and may seem odd for people of different cultures.[34]

When eating a meal, Inuit place large slabs of meat, blubber, and other parts of the animal on a piece of metal, plastic, or cardboard on the floor.[3] From here, anyone in the house is able to cut off a piece of meat. At these meals, no one is obliged to join in the meal; Inuit eat only when hungry.[3] Sometimes, though, meals are announced to the whole camp. A woman does this by the shout of "Ujuk!" which means "cooked meat".[34]

After a hunt, the eating habits differ from normal meals.[35] When a seal is brought home, the hunters quickly gather around it to receive their pieces of meat first. This happens because the hunters are the coldest and hungriest among the camp and need the warm seal blood and meat to warm them.[35] The seal is cut in a specific way directly after a hunt. Borré explains the cutting of the seal in this way: "one of the hunters slits the abdomen laterally, exposing the internal organs. Hunters first eat pieces of liver or they use a tea cup to gather some blood to drink."[35] At this time, hunters may also chop up pieces of fat and the brain to mix together and eat with meat.[35]

Women and children are accustomed to eating different parts of the seal because they wait until the hunters are done eating. Intestines are the first thing to be chosen and then any leftover pieces of the liver are consumed.[35] Finally, ribs and backbone are eaten and any remaining meat is distributed among the camp.[35]

Food sharing in the community

Inuit are known for their practice of food sharing, a form of food distribution where one person catches the food and shares with the entire community. Food sharing was first documented among the Inuit in 1910 when a little girl decided to take a platter around to four neighboring families who had no food of their own.[36] 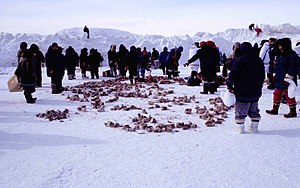 According to Uqalurait: An Oral History of Nunavut, "food sharing was necessary for the physical and social welfare of the entire group."[9] Younger couples would give food from their hunt to the elders, most often their parents, as a sign of respect. Food sharing was not only a tradition, but also a way for families to make bonds with one another. Once you shared food with someone, you were in a "lifelong partnership" with them.[9]

Inuit often are relentless in making known that they are not like Qallunaat in the sense that they do not eat the same food and they are communal with their food. Qallunaat believe that the person who purchases the food is the owner of the food and is free to decide what happens to the food. Searles describes the Inuit perspective on food by saying that "in the Inuit world of goods, foods as well as other objects associated with hunting, fishing, and gathering are more or less communal property, belonging not to individuals but to a larger group, which can include multiple households." Food in an Inuit household is not meant to be saved for the family who has hunted, fished, gathered, or purchased it, but instead for anyone who is in need of it. Searles and his wife were visiting a family in Iqaluit and he asked for permission to have a cup of orange juice. This small gesture of asking was taken as offensive because Inuit do not consider food belonging to one person.[3]

Perceived benefits and beliefs of the diet 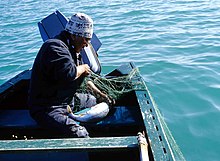 The Inuit believe that their diet has many benefits over the western Qallunaat food. They are adamant about proving that their diet will make one stronger, warmer, and full of energy.

One example is the drinking of seal blood. When interviewing an Inuit elder, Searles was told that "Inuit food generates a strong flow of blood, a condition considered to be healthy and indicative of a strong body."[3] After the consumption of seal blood and meat, one could look at their veins in the wrist for proof of the strength that Inuit food provides.[3] Borré states that "seal blood is seen as fortifying human blood by replacing depleted nutrients and rejuvenating the blood supply, it is considered a necessary part of the Inuit diet."[35]

Inuit also believe that eating raw meat keeps them warmer and stronger.[37] They say that raw meat takes effect on one's body when eaten consistently.[37] One Inuk, Oleetoa, who ate a combination of "Qallunaat" and Inuit food, told of a story of his cousin Joanasee who ate a diet consisting of mostly raw Inuit food. The two compared their strengths, warmth, and energy and found that Joanasee benefited most based on his diet.[3]

A particularly strong belief held by the Inuit is about the relationship between seal and Inuit. According to Inuit hunters and elders, hunters and seals have an agreement that allows the hunter to capture and feed from the seal if only for the hunger of the hunter's family. Borré explains that through this alliance "both hunter and seal are believed to benefit: the hunter is able to sustain the life of his people by having a reliable source of food, and the seal, through its sacrifice, agrees to become part of the body of the Inuit."[35]

Inuit are under the belief that if they do not follow the alliances that their ancestors have laid out, the animals will disappear because they have been offended and will cease to reproduce.[35]

As saltwater animals, seals are always considered to be thirsty and are therefore offered a drink of fresh water as they die. This is shown as a sign of respect and gratitude toward the seal and its sacrifice. This offering is also done to please the spirit Sedna to ensure food supply.[9]

Borré tells of a time when she saw an Inuit woman fall ill who blamed her sickness on the lack of seal in her diet. Once receiving seal meat, the woman felt better within hours and said that her quick recovery was due to the consumption of seal meat and blood. Borré experienced this many times among many different members of the group and they all attributed their sickness to the lack of Inuit food.[35]