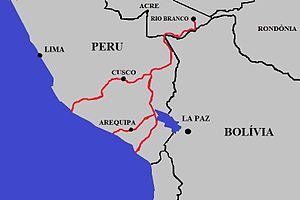 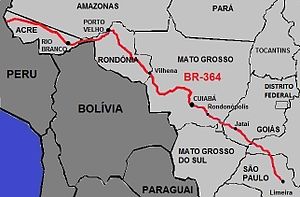 The Interoceanic Highway or Trans-oceanic highway is an international, transcontinental highway in Peru and Brazil to connect the two countries.[1] The east–west passageway spans 2600 kilometers. From Peru's Pacific Ocean coastline, it continues across the Andes mountains and through a large part of the Amazon rainforest in the Peruvian department of Madre de Dios. It then travels into Brazil where it connects with a network of existing highways to the Atlantic. It entailed the renovation and construction of roughly 2,600 kilometers of roads and 22 bridges. Completed in 2011, it creates a connected highway from the Peruvian ports of San Juan de Marcona to the Brazilian city of Rio Branco its ZPE (Special Export Zone) and the rest of the country. The project came into being via a 2004 agreement between Alejandro Toledo and Luiz Inácio Lula da Silva, then presidents of the two countries.

In Peru the project is known by the MTC (Ministerio de Transportes y Comunicaciones) as the Corredor Vial Interoceánico Sur Perú-Brasil[2] and by ProInversion (Private Investment Promotion Agency - Peru) as the Initiative for the Integration of the Regional Infrastructure of South America, (Iniciativa para la Integración de la Infraestructura Regional Suramericana) (IIRSA), SUR axis.[3] The project is part of a national road investment plan which involves the construction of three longitudinal highways, and 20 transversal highways. Parts of these transversal highways make up part of IIRSA SUR.[4]

As the project now links three Peruvian ports to Brazil, the route has several branches (map). Furthermore, the construction of the various branches has been divided up into a number of stretches or sections, each of which has been constructed as part of a separate concession. Five concessions were constructed in two blocks:

In June 2005, the second, third, and fourth sections were leased to specialized Peruvian and Brazilian consortia of private companies for 25 years, in which they will be responsible for looking after the highway, the built and forthcoming bridges, and tollbooths.[citation needed] The first and the last section were leased in 2007.

The Brazilian section runs from the tri-border town of Assis Brasil via the BR-317 into the main Brazilian road network, in this case the BR-364, to São Paulo and elsewhere.

The project employed about 6,000 people during construction. It was inaugurated by Peruvian President Garcia in August 2011 and is now officially complete and operational.[7]

In 2017, it was found that the highway was practically not being used to trade. The average circulation was only seven commercial vehicles per hour, an extremely low average. According to the Peruvian authorities, there were basically no Brazilian products on the way to the ports in Peru.[8]

There is an intention to build another route between Paita and Yurimaguas[citation needed], both in Peru, to give river access to the Amazon and Brazil.