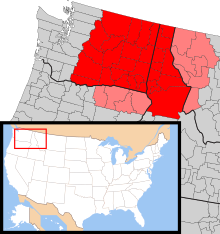 As of 2016 the U.S. Census Bureau estimated the combined population of eastern Washington and north Idaho alone to be 2,240,645, comparable to that of New Mexico. Its Canadian counterpart, north of the border, is the British Columbia Interior. Significant urban centers include the Spokane–Coeur d'Alene area and the Tri-Cities.

The region is bounded by the Cascade Mountains on the west and the Rocky Mountains (following the spine of the remote and rugged Cabinet Mountains) on the east, the Blue Mountains of Oregon and foothills of the Wallowa Mountains to the south, southeast, and encompasses the Columbia river basin (or Columbia Plateau). Between the three mountain ranges are large, sweeping areas of semi-arid steppe, part of which has been irrigated due to the Columbia Basin Project, resulting in expansive farmland in central Washington. The Palouse, original home of the Appaloosa, is another major agricultural region located in the gently rolling hills of southeastern Washington and extending into Idaho. In northern Idaho, the Silver Valley is a mineral-rich region of the Coeur d'Alene Mountains noted for its mining heritage, dating back to the 1880s.

Spokane, the region's largest city, is located near where the arid, and largely unforested Columbia plateau meets the lush forests of the Selkirk Mountains. The urban area stretches east into Idaho along the I-90 corridor through the Spokane River valley across the border of Idaho into the cities of Post Falls and Coeur d'Alene on the north bank of Lake Coeur d'Alene. The Northeastern Washington and Northern Idaho portion of the Inland Empire are mountainous and forested, and the crest of the Bitterroot Range of the Rocky Mountains forms part of the eastern boundary of the Inland Empire region, while the Columbia River forms a significant part of its southern boundary.

The Washington side is generally semi-arid, while the Idaho side experiences a mostly dry summer continental climate.

*Sometimes considered to be in the region