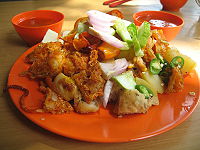 Indian Singaporean cuisine refers to food and beverages produced and consumed in Singapore that are derived, wholly or in part, from South Asian culinary traditions. The great variety of Singapore food includes Indian food, which tends to be Tamil cuisine and especially local Tamil Muslim cuisine, although North Indian food has become more visible recently. Indian dishes have become modified to different degrees, after years of contact with other Singapore cultures, and in response to locally available ingredients as well as changing local tastes. The local forms of Indian food may be seen as localised or even regional variations of Indian food, or in some cases, a form of hybrid Indian-Singaporean cuisine. Popular 'Indian' dishes and elements of Indian cuisine (although sometimes prepared and sold by non-Indians) include:

Other dishes were popular during the colonial period, when Indian ingredients and other culinary influences spread with the Empire to places like Singapore. Many of them endure in some homes and restaurants. Some of these dishes include:

There are also many other Indian foods that are less widely available foods, but which can still be found in several areas serving a more specifically Indian clientele, especially in and around Little India, Singapore. These include appam, bhatura, chutney, sambar, idli, muruku, putu mayam, samosa, tandoori, thosai, upma and various sweets, including jalebi, halva, laddu, paayasam and gulab jamun.